The wind industry crossed an important threshold in the United States last year, exceeding the generating capacity of hydroelectric power for the first time, according to the main industry trade group, the American Wind Energy Association.

The nation’s fleet of dams has long stood as the top renewable energy source, but there has been little market interest in building more big hydroelectric generating stations. In the meantime, wind has rapidly expanded — more than tripling in capacity since 2008 — with many more installations on the way.

The comparison here is limited, measuring the maximum amount of power that generating stations are rated to produce — a threshold few, if any, ever meet. According to the Energy Information Administration, conventional hydroelectric generating capacity stood at 78,956 megawatts in 2015, while wind, the industry group says, hit 82,183 megawatts last year, about enough to run 24 million average American homes. (The hydroelectric figure does not include pumped storage, in which water pumped to an elevated reservoir can be released through a turbine to generate electricity when needed.) 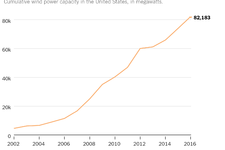 The Role of Incentives

The main fuel driving the robust spread of wind farms across the country — with a dense cluster sweeping up from Texas through the Great Plains — has been a combination of federal tax incentives and state mandates requiring utilities to buy renewable energy as part of their strategies to reduce carbon dioxide emissions to stem climate change.

The federal tax incentive favored by the industry, the production tax credit, was worth 2.3 cents a kilowatt-hour of electricity sent to the grid by projects that began construction in 2015 and 2016, but it is set to phase out by the end of 2019. (In 2015, the average home consumed about 900 kilowatt-hours of electricity a month.) As long as that schedule remains, industry executives say, they should be able to meet their goal of supplying 10 percent of the nation’s electricity by 2020, more than twice the share it accounted for in 2015.

There is, of course, no guarantee that Congress will maintain the tax credit as planned, or that other potential changes to the tax system won’t make the economics of wind less favorable.

Although the new administration appears far less focused on making carbon dioxide reductions a priority in its energy policy, wind executives say their industry can help reach some of President Trump’s other goals. Those include building new infrastructure — like, say, transmission lines to carry wind power from where it’s made to where it’s needed — and bolstering the economy and creating jobs, especially in rural areas.

According to the Department of Energy, the wind industry now employs almost 102,000 workers, up 32 percent from 2015, while the Department of Labor projects wind service technician as the nation’s fastest-growing occupation over the next decade.