Will Federal Employees Work for a President They Disagree With? 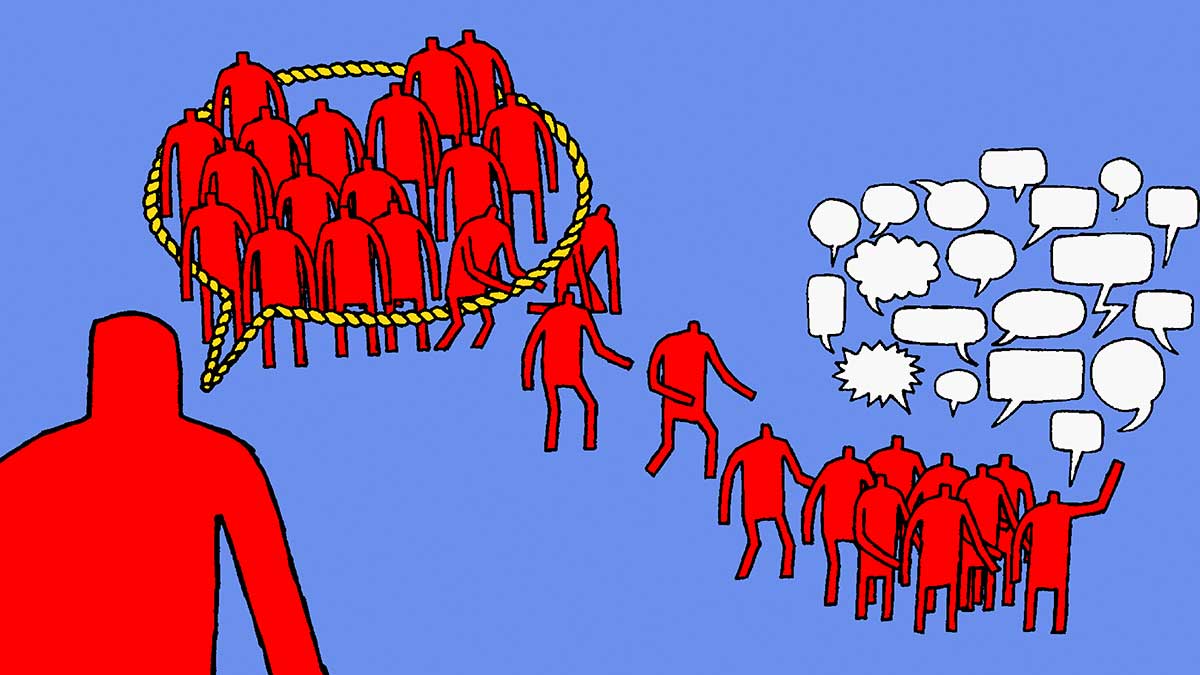 After the inauguration of President Trump, there were numerous stories about federal employees leaving the State Department, with perhaps more to follow in environmental and scientific agencies. A number of former government officials expressed worry that the departures would deprive the government of expertise and continuity precisely when they are most necessary. This raises the question: How much turnover is normal when a new administration takes office?

We set out to answer this question with data obtained from the United States government’s Office of Personnel Management. We followed the careers of millions of federal employees from 1988 and 2011 to determine the effect of new presidential administrations on their career choices. It turns out that when a new administration is sworn in, it is not just the former president’s appointees who leave. Many senior civil servants depart, too.

The data reveals a number of interesting patterns. First, there is a predictable increase in departures among the most senior employees after a presidential election. There are approximately 2.8 million U.S. civilian employees scattered across the nation (and globe), but the subset most affected by a new administration are those at the top of the hierarchy. For example, the Senior Executive Service (SES) is a corps of the 7,000 highest-level managers in government who serve across changing Democratic and Republican administrations. Most members have spent their entire careers in the public service. They direct counterintelligence in the Department of Homeland Security or emergency response in the Federal Emergency Management Agency, among other things. They have substantial policy and management experience and are tasked with keeping the government running while appointed positions are vacant during the transition and first year of a new administration. The annual turnover rate for these executives is about 8%, which means that about 560 members of the SES retire each year. This increases to 9.6%, or about 660 members, in the first year of a new administration. An additional 100 experienced managers leave the government when a new president takes over.

Agencies are not equally affected by the turnover. The federal workforce is spread across nearly 300 agencies with dramatically different missions and cultures. Some agencies carry out tasks that are more liberal in nature, say, implementing social welfare policies or cleaning the environment. Others agencies are more conservative, enforcing security or providing for national defense. (Social science research shows that liberal and conservative employees tend to self-select into agencies whose missions they support, further giving many agencies a liberal or conservative bent.) This matters for turnover: Departure rates are higher in liberal-leaning agencies during Republican administrations and in conservative-leaning agencies during Democratic administrations.

We categorized agencies as liberal, moderate, or conservative based on data from surveys of experts (e.g., journalists, academics, Washington think tanks). We then identified where there were mismatches — cases where an agency was liberal but a president was a Republican, or vice versa. We found that turnover was higher at all employment levels in mismatch agencies than in other agencies. The overall rate of federal employee turnover in the first year of a new administration is 6.1%, but in mismatch agencies it is 6.5%. Among members of the SES, the 8% average turnover rate increases to 10.2% in mismatch agencies. Higher turnover at mismatch agencies lasts for the next two years. 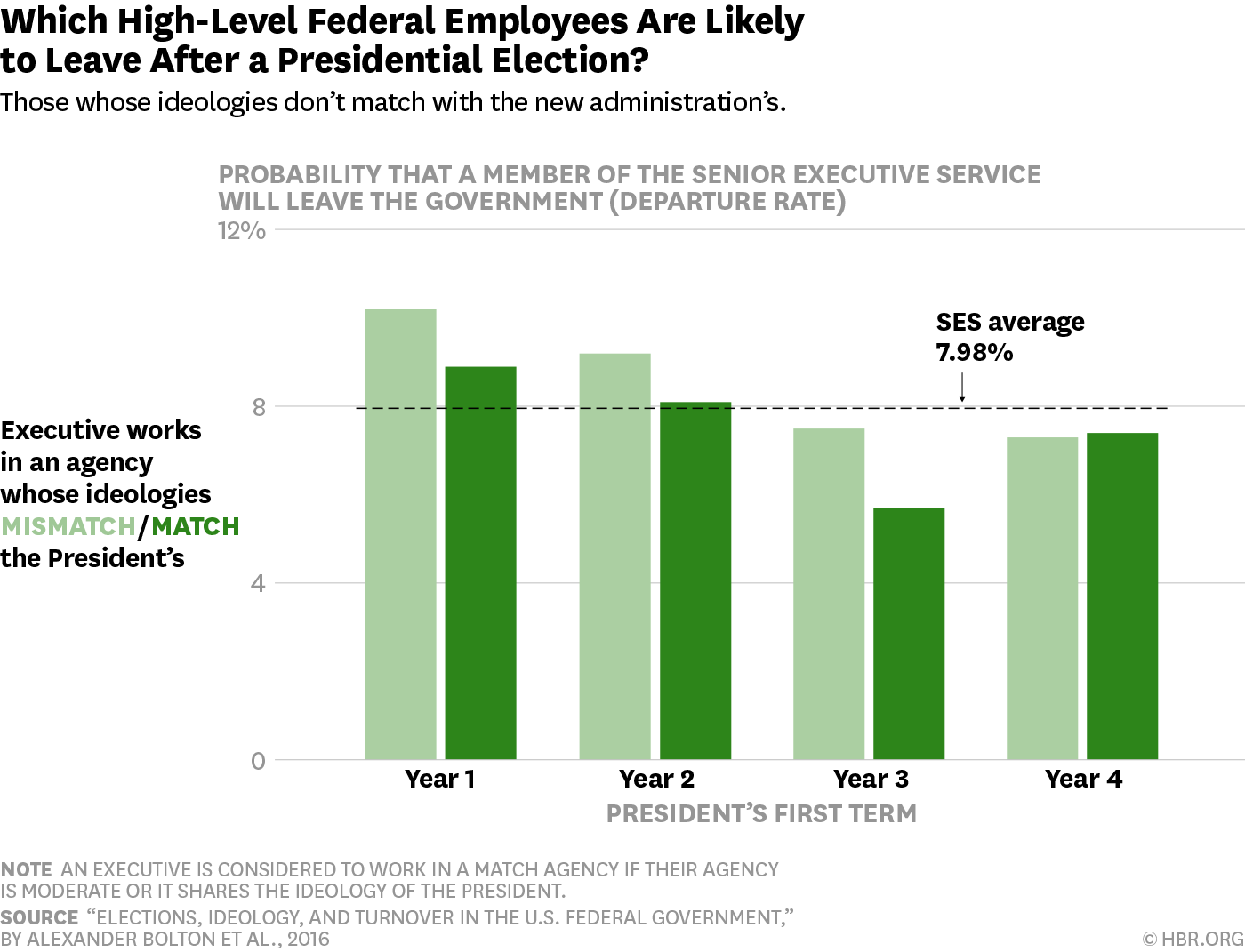 The chart above plots the estimated probability that a member of the SES leaves government (i.e., departure rate) by whether they work in an agency that is an ideological mismatch with the new president. During the president’s first term, the departure rate is notably higher for those working in a mismatch agency. It is highest in the first year, right after the new administration takes office, and then declines over the course of the president’s first term — so that eventually there is no difference between civil servants in mismatch agencies and other agencies.

When senior managers leave, what does that mean for middle managers? We found that, on average, departure rates actually decrease slightly for the subset of employees who are next in line. After all, when high-ranking positions become vacant, this opens up new career opportunities for those below. The data shows that federal employees in Grades 13–15, the group from which career SES members are generally drawn, show the lowest sensitivity to ideological mismatches and are slightly more likely to stay in government in the first year of a new administration.

Elections can bring significant changes to federal workplaces, from empowering new decision makers to changes in policies to hiring freezes. These can be significant career events, particularly for senior federal employees. If a new administration indicates that career professionals who worked closely with the old administration will be sidelined as part of larger policy changes, then their departures are predictable. Presumably, those with the best options outside government will be among the first to leave.

If the past is any indication, the Trump administration will lead to turnover among senior federal personnel, particularly in agencies with views that most differ from the White House. Given signs that President Trump’s administration will be more conservative than recent presidents’, we can expect to see a particularly large exodus of senior executives from liberal-leaning agencies, but not in agencies that share the president’s views. Some next-in-line managers will look at the openings as an opportunity, but this will not offset the disruption across the government caused by the new administration.

Does any of this matter to actual policy? While presidents and their appointees cycle in and out of leadership roles in the executive branch, career officials in government are thought to play a stabilizing role, supporting new leaders and providing continuity for agencies and their missions. An excessive loss of civil servant experience and expertise could harm the new government’s decision making and its ability to respond to the electorate’s needs and concerns.