Get ready to pay more to borrow.

When it comes to economics, certainty is usually elusive, but in the case of the expected decision by the Federal Reserve to raise short-term interest rates by a quarter-point on Wednesday, the impact on consumers is clear.

The typical credit card holder who is carrying a balance will quickly see annual interest charges rise to 16.75 percent from 16.5 percent. Rates on auto loans and home equity loans will also creep higher, as will mortgage rates, albeit over a longer period of time.

“It will be a direct pass-through to credit card holders,” said Greg McBride, chief financial analyst with Bankrate.com. “This is a rising tide that lifts all boats, and you’re going to feel it in equal magnitude wherever you sit on the credit spectrum.”

Still, rather than focusing on the imminent move by the Fed, experts are warning that the long-term trajectory for borrowing costs will steadily move higher, especially if the central bank follows through on signals that it will raise rates twice more this year.

But although almost all borrowers will be affected, some will feel it much more than others. Here’s how it’s likely to play out.

According to Mr. McBride, credit card costs are directly tied to the prime rate, which in turn is linked to the federal funds rate. The latter is what the Fed is set to increase Wednesday. As both these rates move higher, so will the adjustable annual interest rate on credit cards.

Over all, the anticipated quarter-point increase in the central bank’s target for the benchmark fed funds rate is small, and it still leaves short-term borrowing costs near historical lows.

But because credit card debt is so much more expensive than other forms of credit, like a mortgage or a car loan, an already expensive way to borrow will become even more burdensome. Experts always advise paying monthly balances in full, but roughly 40 percent of consumers don’t do that. And among this group, the typical balance stands at nearly $17,000.

The extra quarter-point’s impact is small for now, equaling about $42 per year on that typical balance. But if the Fed moves two more times this year, that will add another $85 annually for the typical family that carries a balance on its cards.

Unlike credit card terms, which move according to short-term interest rates, mortgage rates generally follow the trajectory of the yield on 10-year Treasury bonds. Bond yields have been moving higher, partly because of the Fed’s intention to tighten monetary policy, but mostly because of indicators that the economy is getting stronger and the possibility that government borrowing will soar under President Trump.

Mortgage rates have already run up sharply since the election — rates on a 30-year fixed mortgage now stand at about 4.25 percent, up from 4 percent late last year and 3.75 percent in early November, according to Inside Mortgage Finance.

“Investors expect the Fed to raise rates, and to some extent that’s baked into the market and mortgage rates,” said Guy Cecala, the company’s chief executive and publisher. “But it’s not lock step, and the Fed is a relatively minor factor in determining mortgage rates.” 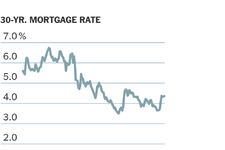 On the other hand, homeowners who have borrowed against properties using a home equity line of credit will feel a pinch much sooner. These rates are variable and will most likely rise by a quarter-point after a Fed move. With a typical balance equaling $30,000, that adds about $6.25 in monthly interest payments.

Still, even if home buyers won’t really be put out by a single Fed move in March, tighter monetary policy and rising bond yields will gradually make mortgages significantly more expensive in the months ahead.

And because the outstanding balances of mortgages are so much larger than they are for credit cards or home-equity loans, the ultimate impact of higher mortgage rates is much more noticeable. For example, a rise of one percentage point on a mortgage of $500,000 will lift interest payments by nearly $5,000 in the first year of the loan.

As a result, more borrowers are looking at adjustable-rate mortgages, which lock in rates initially, but then let them float after five, seven or 10 years. Rates on five-year adjustable rate mortgage are about a full percentage point below what a 30-year fixed mortgage costs.

“We’ve been spoiled,” said Mr. Cecala, noting that during the housing boom before the recession, 30-year mortgage rates stood at 6 percent. He doesn’t expect a return to that level anytime soon, but he does expect rates on a 30-year, fixed-rate mortgage to hit 5 percent in 2018.

“I don’t think there’s any question that mortgage rates are heading to 5 percent or higher,” Mr. Cecala said. “It’s just a question of when.”

Although car loans will also get slightly more expensive, the quarter-point rise in financing costs comes on top of relatively low borrowing rates to begin with. Currently, consumers pay about 4.3 percent annually for a loan on a new car, while the rate on loans for used cars stands at 5 percent, according to Bankrate.com.

“The good news is that there is still intense competition in the auto lending landscape,” Mr. McBride of Bankrate said. “Even with rates moving up, plenty of people are finding loans for 3 percent a year or lower.”

What is more, as car loans are nowhere near the size of mortgages, the impact of the quarter-point increase is slight. The cost of a $25,000 auto loan looks to rise by just $3 a month.

Returns for savers, unlike those for stock market investors, have never recovered from the financial crisis of 2008 and the recession, when overall interest rates plunged. Short-term rates have crept higher since the Federal Reserve embarked on its path to normalize monetary policy in December 2015, but savers wouldn’t know that: The typical savings account currently pays 0.1 percent per year.

“If it goes from 0.1 percent to 0.2 percent, who cares?” Mr. McBride said. “If you’re waiting at your existing bank for better yields to land in your lap, you’re going to be disappointed.”

PurePoint is a unit of MUFG Union Bank, whose Japanese parent is among the largest financial institutions in the world, and Popular Direct is an affiliate of the Puerto Rico-based Banco Popular. Both institutions get high ratings for safety and soundness from Bankrate.com.

In addition to earning more now, savers at these institutions will also see yields rise more quickly if the Fed continues to nudge rates higher in the months ahead.

“To see an improvement, you have to have your money at one of the banks that’s paying the best yields,” Mr. McBride said. “You’ve got to play in the right sandbox.”