What those IP ratings like IP68 or IP53 really mean

Waterproof phones are exciting. Instead of dropping your phone in a bowl of rice when you accidentally knock it off the counter and into the sink, you can just dry it off and keep on truckin’. And many of today’s waterproof phones are as waterproof as they can possibly get—they’ve got an IPX8 rating, where 8 is the highest (barring extreme products that aren’t made for consumers) “waterproofness” a consumer device can possibly qualify for.

Well…maybe not. The Samsung Galaxy S7 has an IP68 rating—the highest rating a consumer device can get on the IP scale—but that still doesn’t mean you should take it surfing or white-water rafting. Here’s what those IP ratings really mean.

First things first: What does “IP” even stand for? Well, it actually stands for two things—“International Protection” and/or “Ingress Protection.” The IP code was created by the International Electrotechnical Commission (IEC), which is a non-profit, non-governmental organization that creates international standards for all sorts of “electrotechnology,” from semiconductors to batteries to home appliances to…your smartphone.

The point of the IP code is to provide you, the customer, with “detailed” information about your device beyond just “waterproof” and “not waterproof,” though the code’s standards (and lack thereof) can be pretty confusing. But the goal of the IP code is to let you know whether your device will survive if you get caught in a torrential downpour or if you accidentally drop it in the pool.

What the numbers mean

The IP code has two numbers. The first number (0 – 6) indicates your device’s protection level against “solid particles,” which includes everything from large body parts to microscopic specks of dust. An IP2X rating, for example, means that your device is protected against “fingers or similar objects,” but anything smaller than a human finger might be able to get through and do some damage. An IP rating of IP6X, on the other hand, means that your device is dust-tight, and even tiny bits of dust won’t end up inside the casing. 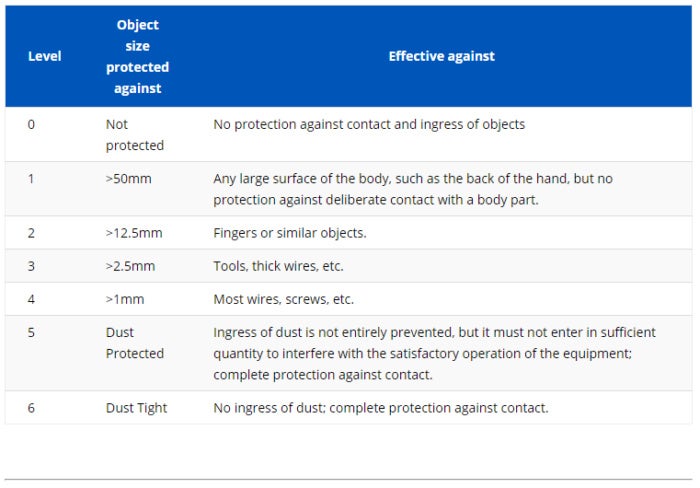 The second number indicates your device’s protection level against liquid—specifically, fresh water. This number ranges from 0 to 9K, though no consumer smartphone is rated 9K (or 6K, for that matter). So the highest rating you’ll see here is an 8, which means the device can be immersed in water that is deeper than 1 meter—but the actual depth level is determined by the manufacturer, as is the amount of time the device can be immersed.

While the solid particle protection levels are relatively straight-forward (if a bit useless, since it’s probably pretty obvious if a device is susceptible to finger-sized objects), the liquid protection levels aren’t quite as easy to decipher, because liquid is much better at sneaking inside your electronics to do damage. 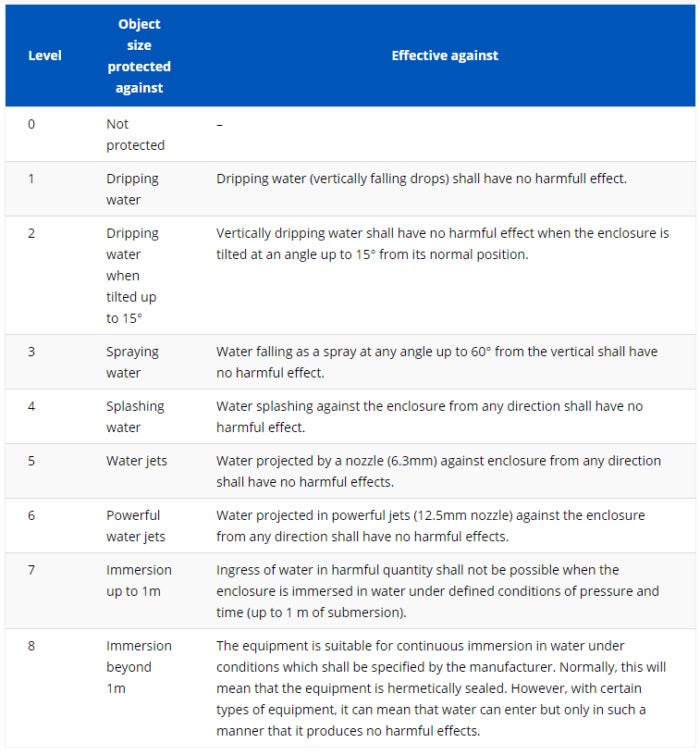 The IP ratings for liquid protection are not cumulative beyond IPX6. This means that any device rated IPX7 or IPX8 only had to pass one test (the test that determined its number), not any of the other tests. So while an IPX7 phone has passed a test where it was fully immersed in up to 1 meter of water for 30 minutes, it hasn’t necessarily passed the IPX6 test or the IPX5 test, both of which involve water being projected by a nozzle or powerful jets. In other words, your IPX7 phone might be fine if you drop it in the pool, but could be compromised if you spray it with a hose. (Of course, it could also be fine if you spray it with a hose—the point is that the IP rating alone doesn’t tell you.)

If you see an IP rating with an “X” instead of a number, don’t panic—that doesn’t mean the device has zero protection against dust or water, it just means the device hasn’t been tested against that element. At higher IP ratings you can be fairly confident that your phone is protected against all elements—if a phone with an IPX7 rating can be immersed in water, it’s probably also dust-proof.

The lab vs. the real world

Although this all seems straightforward, the numbers—and their official translations—don’t really tell you very much about how waterproof (or rather, not waterproof) your device is.

The ratings aren’t really enough to tell you exactly how waterproof (or not) your device is. The test that a smartphone passes in controlled laboratory conditions is often very different from what happens in the real world.

Let’s take a look at the warnings smartphone-makers themselves put on their websites—such as this warning from Sony about its “waterproof” Xperia phones (which the company warned were not really waterproof back in 2015):

Sony warns is customers about the extent to which is phones are “waterproof.”

As you can see, lab conditions are usually pretty different from real-world conditions. Tests are always performed in fresh water, which rules out a lot of real-world water conditions such as salt water at the beach, chlorinated water in a pool, or a spilled soft drink. Tests usually involve a phone that’s in standby or even turned off, so you can forget about using your phone underwater (your touchscreen likely won’t really work anyway), and Sony even mentions that you should let your phone’s microphone and speaker dry completely (up to three hours) before attempting to use them.

On top of that, the IP rating only tells you how protected your phone is against dust particles and pure water—not how protected it is against other environmental factors, such as extreme temperatures. Unless your phone has also passed military standards for extreme conditions (MIL-STD-810G) like the Samsung Galaxy S7 has, you should probably avoid dropping it into very hot liquids (like a hot tub).

What can I do with a phone that’s rated…

The HTC 10 and the Google Pixel both have an IP rating of IP53. Officially, this means these devices are protected against dust—dust might get inside, but it won’t compromise their inner workings—and against spraying water (no pressure) when tilted up to a 60-degree angle. Here’s what that means for you. 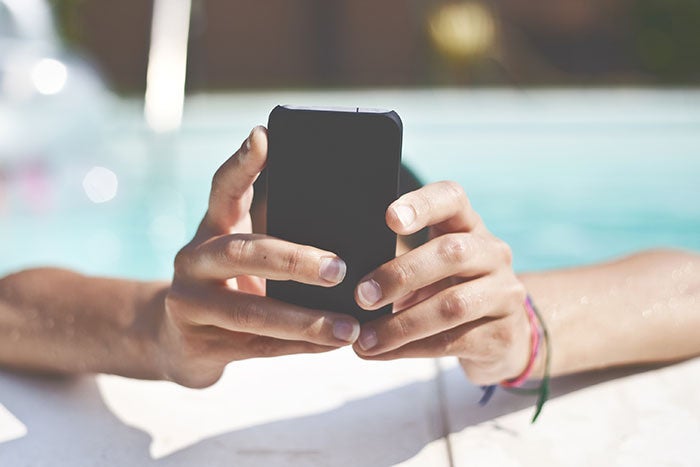 IP53 means you can use your phone by the side of the pool, but you should treat it like a non-waterproof phone. Don’t let it fall in!

Many of Sony’s Xperia phones are rated IP65/68—which is actually better than just being rated IP68. Officially, this means that these phones are completely dust-proof and protected against two types of water damage—low-pressure jets and full immersion (in 1.5 meters for up to 30 minutes). 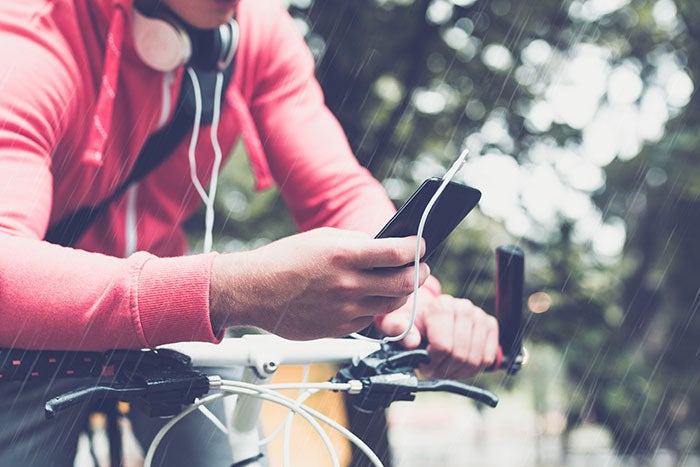 Most non-waterproof phones will survive a little rain, but you shouldn’t regularly use your phone in the rain like this unless it’s IP65.

Samsung’s Galaxy S7, S7 Edge, and S7 Active all have a rating of IP68. Officially, this means these phones are similar to the IP65/68-rated phones, but they might lack the protection against low-pressure jets of water. 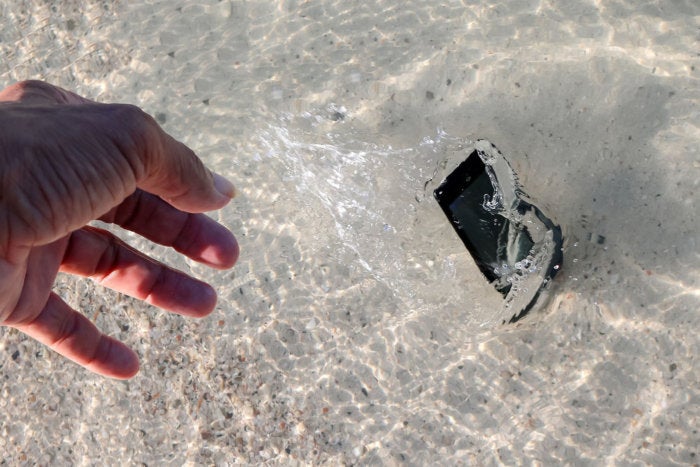 Dropping your phone in the ocean is fine if it’s IP68, but you should rinse it off in fresh water before letting it dry.

You’ll see IP67 on a lot of phones, too. That’s very similar to IP68, with the exception that IP67 means “up to one meter” and IP68 means “more than one meter” of water submersion. That “more than one meter” bit could mean 1.5 meters, or it could mean 10 meters, and only the manufacturer will tell you. Best not to drop either one in the deep end—generally, only devices like rugged sports watches or “diving” electronics can take the pressure of more than a few meters of water. So try not to drop your phone in the deep end.

This story, “What those IP ratings like IP68 or IP53 really mean” was originally published by Greenbot.