What Sheryl Sandberg Taught Me About Giving Criticism

Excerpted from Radical Candor: Be a Kick-Ass Boss Without Losing Your Humanity by Kim Scott. Copyright 2017 Kim Scott. Reprinted with permission from St. Martin’s Press.

Shortly after I joined Google to lead online sales and operations for AdSense in 2004, I gave a presentation to Google’s CEO and founders on the performance of AdSense. Despite the fact that AdSense was doing great, and even though my boss, Sheryl Sandberg, was sitting next to me in a show of support, I felt nervous. Luckily, we had a good story to tell: The business was growing at an unprecedented rate. As I looked around the room, I caught the eye of CEO Eric Schmidt, whose head had snapped out of his computer when I’d declared how many new customers had signed up in the past month. I’d distracted him from his email — a triumph! “How many did you say?” he asked. I repeated the number, and he almost fell out of his chair.

Related: 10 Books Every Leader Should Read to Be Successful

I couldn’t have asked for a better reaction. After I finished, I felt that mix of euphoria and relief that follows a successful presentation. My boss was waiting for me by the door and I half expected a high five. Instead, she asked if I’d walk back to her office with her. I got a sinking feeling in my stomach. Something hadn’t gone well. But what?

“You are going to have an amazing career here at Google,” Sandberg began. She knew how to get my attention — I had three failed startups under my belt and badly needed a win. “And your ability to be intellectually honest about both sides of an argument, not just your own, bought you a lot of credibility in there.” She mentioned three or four specific things I’d said to illustrate her point. I’d been worried that I wasn’t arguing my points vehemently enough, so this was welcome news to me. “I learned a lot today from the way you handled those questions.” This didn’t feel like mere flattery — I could tell from the way she stopped and looked me in the eye that she meant it. She wanted me to register that something I’d been worried about being a weakness was actually a strength.

This was interesting, but I wanted to file it away to think about later. That nagging feeling persisted in my stomach. There was an axe waiting to fall here. What I really wanted to know was, what had I done wrong? “But, something didn’t go well, right?”

Sandberg laughed. “You always want to focus on what you could have done better. Which I understand. I do, too. We learn more from failure than success. But, I want you to focus for a minute on what went well, because overall it really did go well. This was a success.”

Related: 50 Rules for Being a Great Leader

I listened as best I could. Finally, she said, “You said ‘um’ a lot. Were you aware of it?”

“Yeah,” I replied. “I know I say that too much.” Surely she couldn’t be taking this little walk with me just to talk about the “um” thing. Who cared if I said “um” when I had a tiger by the tail?

“Was it because you were nervous? Would you like me to recommend a speech coach for you? Google will pay for it.”

“I didn’t feel nervous,” I said, making a brushing off gesture with my hand as though I were shooing a bug away. “Just a verbal tic, I guess.”

“There’s no reason to let a small thing like a verbal tic trip you up.”

“I know.” I made another shoo-fly gesture with my hand.

Sandberg laughed. “When you do that thing with your hand, I feel like you’re ignoring what I’m telling you. I can see I am going to have to be really, really direct to get through to you. You are one of the smartest people I know, but saying ‘um’ so much makes you sound stupid.”

Now that got my attention.

Sandberg repeated her offer to help. “The good news is a speaking coach can really help with the ‘um’ thing. I know somebody who would be great. You can definitely fix this.”

How you can do what Sheryl did

Think for a moment about how Sandberg handled that situation. Even though the overall talk had gone well, she didn’t let the positive result get in the way of pointing out something I needed to fix. She did so immediately, so that the problem didn’t hurt my reputation at Google. She made sure to point out the positive things I’d accomplished in the presentation, and what’s more, she did so thoroughly and sincerely — there was no attempt at “sandwiching” the criticism between bogus positives. Her first approach was gentle but direct. When it became clear that I wasn’t hearing her, she became more direct, but even then she was careful not to “personalize,” not to make it about some essential trait. She said I “sounded” stupid rather than I was stupid. And I wasn’t in this alone: She offered tangible help. I didn’t feel like an idiot with defects, but a valuable team member she was ready to invest in.

This conversation was extremely effective on two counts. First, it made me want to solve my “um” problem immediately; after only three sessions with a speech coach, I had made noticeable improvement. Second, it made me appreciate Sandberg and inspired me to give better guidance to my team. The way she gave praise and criticism got me thinking about how to teach other people how to adopt this style of management.

All this from a two-minute encounter.

Wow. How many times have you tried to give feedback that totally falls flat? How can you, like Sandberg, give guidance in a way that confronts a specific situation and creates ripple effects that change how everyone communicates?

I have spent the decade since that encounter coaching the next generation of Silicon Valley leaders to change their approach to guidance — both praise and criticism. It’s surprisingly simple. Anyone can learn it. There are two dimensions to good guidance: Care personally and challenge directly. When you do both at the same time, it’s “radical candor.” It’s also useful to be clear about what happens when you fail on one dimension (ruinous empathy), the other (obnoxious aggression) or both (manipulative insincerity). Being clear about what happens when you fail to care personally or challenge directly will help you avoid backsliding into old habits too common to all of us. 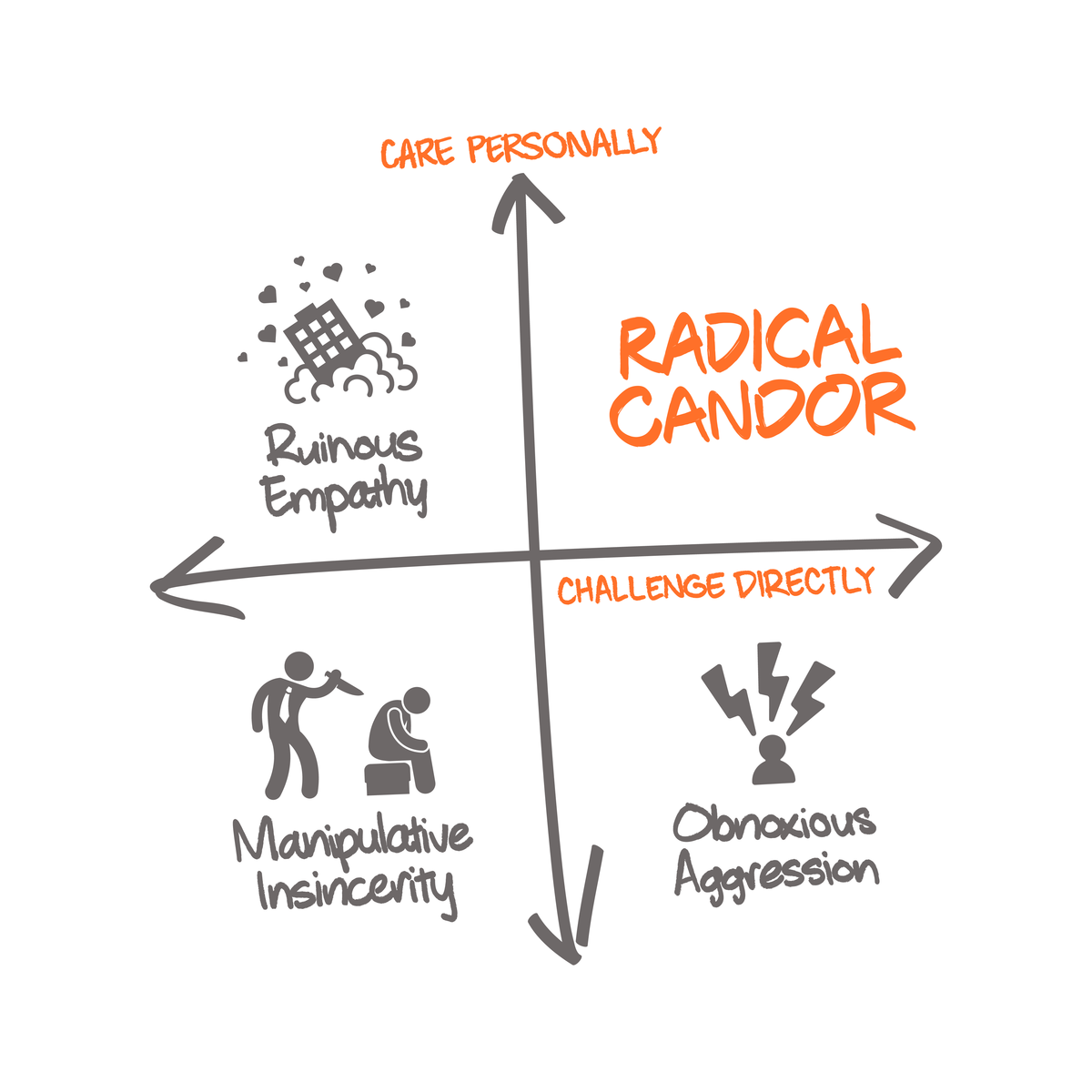 Many of the people I coach have found this framework helpful in being more conscious of what kind of guidance they are getting, giving and encouraging. Another important thing I stress with my clients: It’s vital to remember that very important lesson from the um story — don’t personalize. The names of each quadrant refer to guidance, not personality traits. They are a way to gauge praise and criticism, and to help people remember to do a better job offering both. They are not to be used to label people. Labeling hinders improvement. Ultimately, everyone spends some time in each of the quadrants. We are all imperfect. I’ve never met anyone who is always radically candid. To repeat, this is not a “personality test.”

Related Video: There Is No Such Thing as ‘No’