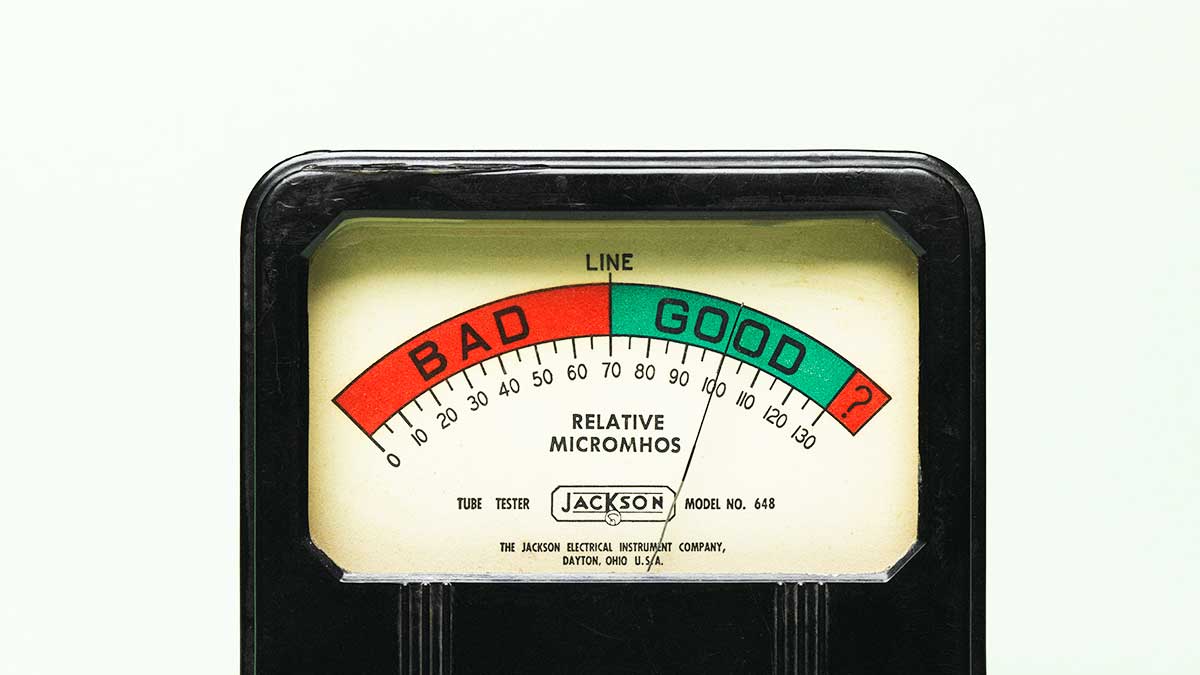 President Trump entered the White House with the lowest approval ratings any president has had when taking office, and they aren’t likely to go up for a sustained period of time. Even if Trump doesn’t believe the polls, as he has avowed, such low approval ratings are likely to have real consequences for him.

On the day he took the oath of office, Gallup’s tracker showed that only 45% of the American public said that they approved of the job Trump was doing, with an equal number disapproving. Since then, his approval has declined slightly, and his disapproval has risen to historically high levels.

To put these figures in context, George W. Bush, who also won the Electoral College while losing the popular vote, came into office with a 57% approval rating. It’s more typical for presidents to start with an approval rating over 60%, as Obama, Carter, and Eisenhower did, even if no one expects a modern president to start over 70%, as Johnson, Ford, and Kennedy did. What all of these presidents have in common is that they only retained their high approval ratings for about three months — what presidency scholars call “the honeymoon period,” before they began to dip significantly. These drops aren’t inevitable — national crises can cause people to rally around the president, as they did after Reagan was shot — but they’re the general rule. So if Trump’s approval numbers are middling-to-poor now, they’re likely to get worse soon. 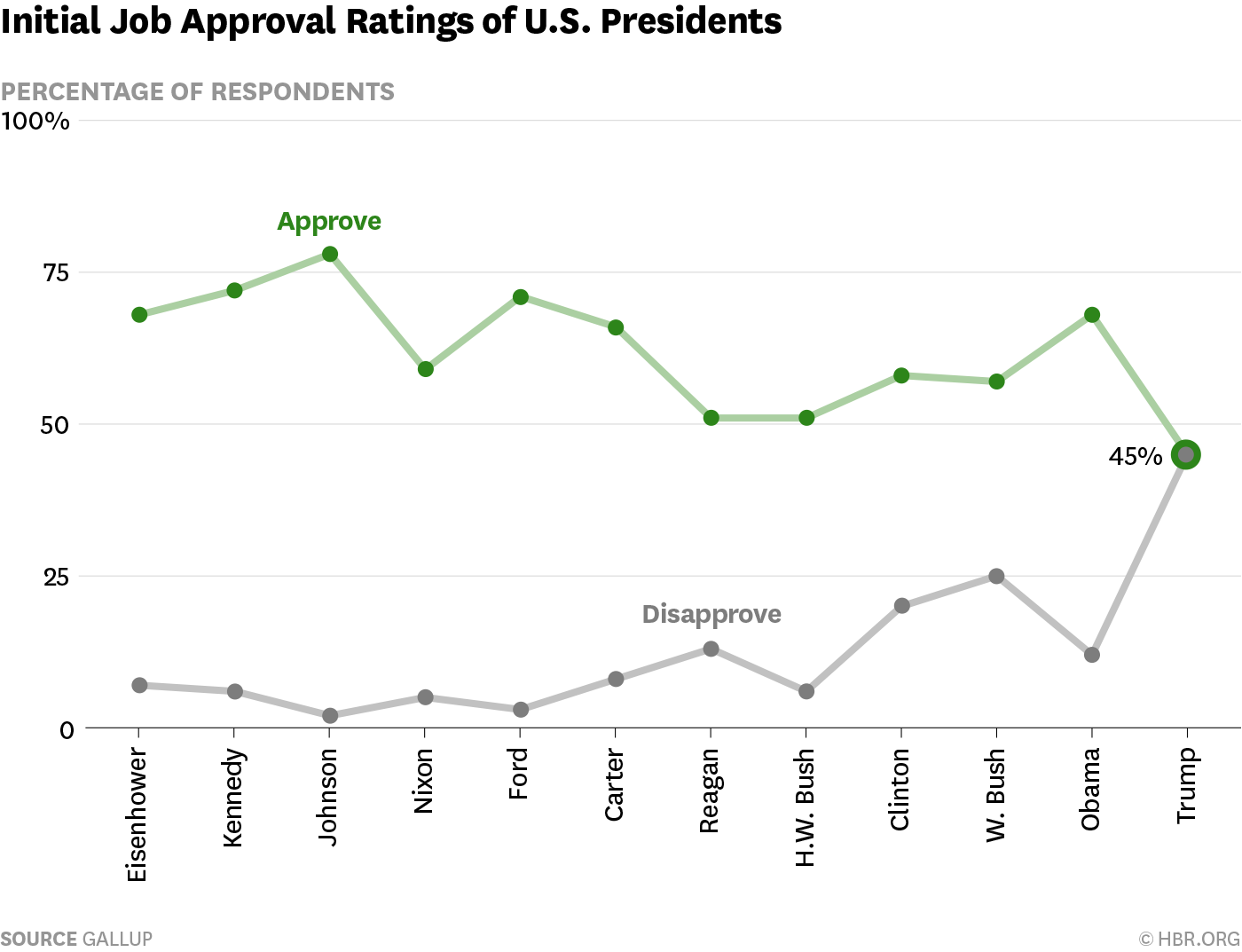 The fact that Gallup and other polling houses have been measuring presidential approval since Harry Truman means that political scientists understand a great deal about how it works. In general, approval is highest when a president takes office and declines fairly slowly throughout the first term. Wars can temporarily boost approval, sometimes to stratospheric heights, but such boosts are generally short-lived. Presidential approval can be thought of as somewhat elastic: In statistical terms, we say that it has a strong memory function. Events can push approval up or down, but as my work with Matthew Lebo on presidential approval has shown, it reverts fairly quickly to its natural level.

There are two factors that seem able to keep approval above or below its natural level for longer periods: the economy and media coverage. In the same line of research, Lebo and I have shown that unemployment and inflation serve to push approval ratings up or down, at least among some voters, and work I’ve carried out on the Obama and Bush years shows that sustained media coverage, positive or negative, can move a president’s approval above or below where it’s expected to be. Trump faces challenges on both these points: Unemployment and inflation are historically low right now, making it unlikely that he’ll be able to improve on them much, and media coverage of every president since Clinton has been dominantly negative, a trend that Trump doesn’t seem likely to change.

Any efforts Trump may take to increase his approval ratings are further hampered by the increasing partisan divide in American politics. Up until Reagan, approval of the president among members of his party was 30–40 points higher than among members of the other party. Under Reagan, averaging over the course of his time in office, the gap was 52 points. Under George W. Bush, 58. Under Obama, 66. In Trump’s first week, he had 89% approval among Republicans and just 13% approval among Democrats, making for a 76-point gap. In essence, the only way Trump can increase his approval is by appealing to independents and Democrats, something he has shown little interest in doing thus far. 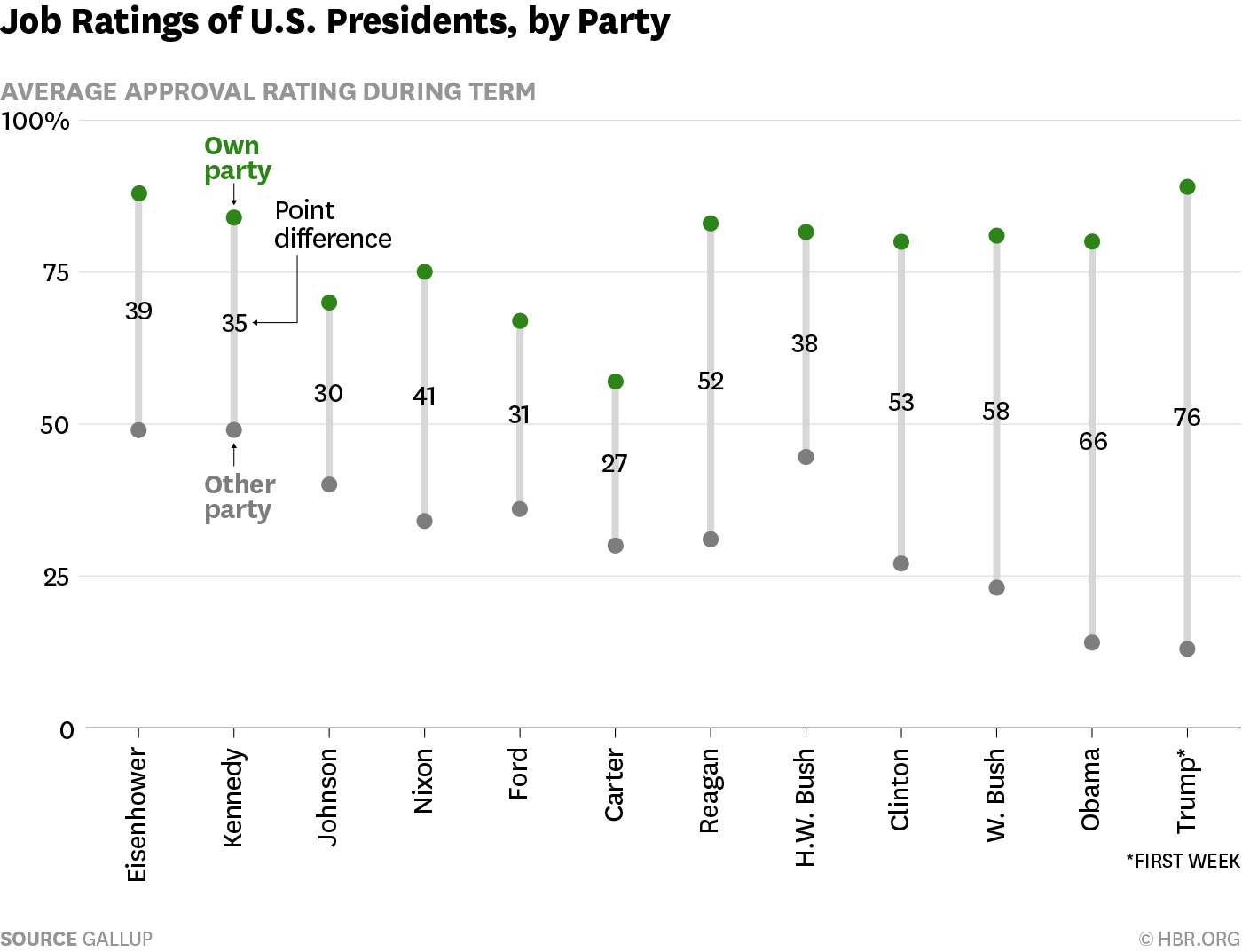 These low approval ratings, which are likely to only get worse, are a problem for Trump even if he doesn’t give them any credence, because any major policy initiative requires that he work with people who do pay attention to them. High approval ratings give a president a great deal of leverage over members of Congress.

When Eisenhower took office, for instance, many members of Congress, even in the other party, faced a situation in which the president was more popular in their districts than they were. Legislators are nothing if not sensitive to factors that could hurt their reelection bids, so they fell over themselves to support the president’s initiatives, even ones that they might otherwise have resisted. Southern Democrats, for instance, had long resisted a federal highway system, due to their distrust of any federal intervention in their states.

Popular presidents can offer appearances at signing ceremonies, host fundraisers, and do all sorts of things to reward cooperative legislators: Eisenhower’s highway program passed through committees controlled by Southern Democrats who could have stopped it.

Of course, there are some powers inherent to the presidency — control over the military, executive orders, and the like — and a clever president can make changes on the margins of the law with these powers. Such powers, however, are conditional: A president who doesn’t have the support of Congress can see his executive orders overturned, his cabinet members turn against him, his policies waste for lack of funding, and his press conferences ignored.

A president can have real power to shape the future of the country, but that only comes with popularity. An unpopular president is more likely to find himself hemmed in by protests, like Johnson and Nixon in their later years — or like Carter, so ignored by Congress and his own administration that he spent his time approving the White House tennis schedules.

If Trump wants to avoid their fate, he’ll need to change something dramatically. We’ll soon find out whether he can.