Trump Wants to Get Tough on Crime. Victims Don’t Agree.

Sending more people to prison, deporting illegal immigrants, cracking down on marijuana use — those are some of the things the Trump administration has said will make America safer.

But what do crime victims think about all this? It is a group whose views are rarely measured, but a poll commissioned by the Alliance for Safety and Justice sought to find out.

A few notes of caution: The group supports criminal justice reform, including incarcerating fewer people, and seeks to promote the voices of victims who agree. And the random survey, which has a margin of sampling error of 3.4 percent, was taken in May, before President Trump repeatedly criticized Jeff Sessions, the attorney general, on Twitter.

But it is a rare chance to hear from victims, more than 800 of whom were asked about their views on the administration’s criminal justice policies. By and large, their priorities appear very different from the president’s. 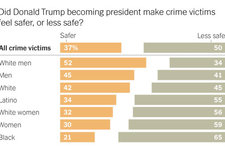 About three in four said they were happy with their local police and law enforcement in general. While only about 42 percent rated Mr. Trump favorably, that was higher than the president’s favorability rating among the general population at the time. About a third held positive views of Mr. Sessions.

When victims were asked to name two things that contributed most to crime in their communities, just 12 percent blamed undocumented immigrants. Almost nobody thought there were too few people in prison.

Instead, more than half named drug and alcohol addiction, and nearly a third pointed to poor parenting. Mental health issues and a lack of job opportunities also ranked high on the list.

“‘Lock ’em up and throw away the key,’ that’s the traditional way of thinking, but many victims don’t want ‘tough on crime’ and incarceration,” said Aswad Thomas, 34, who was shot twice in the back during a robbery attempt in Hartford, Conn., in 2009, ending his plans to play professional basketball. “Most of us want more rehabilitation services for crime victims.”

Mr. Thomas, now the membership director at the Alliance, said once he found out that both of the young men who had shot him had been victims of crime themselves, he became convinced that offering counseling and trauma services to victims could itself help reduce violent crime.

A vast majority of respondents supported increasing treatment for addiction and mental health, while they were less enthusiastic about Trump administration policies like seeking the maximum punishment for drug offenders and increasing deportations, which only 40 percent of respondents favored. Nearly two-thirds said they did not want federal drug laws to be enforced in states where marijuana use has been legalized.

Mr. Sessions has sent strong signals that he will pull back from the Obama administration’s aggressive oversight of police departments, suggesting that it encourages disrespect for the police and hampers their ability to do their jobs. But 54 percent of crime victims opposed any retreat from federal oversight.

A majority of respondents — 84 percent — said additional funding should be spent on rehabilitation and drug and mental health treatment programs for people in the justice system.

Some views held true despite the respondents’ political leanings. Among those who said they held a favorable opinion of Mr. Trump, more than half chose addiction as a leading driver of crime.

About one in five also blamed illegal immigration, compared to one in 10 of overall respondents. Trump supporters were almost evenly split on two issues: whether the federal Justice Department should ease up on oversight of abusive police departments, and whether it should enforce federal laws banning marijuana in states that have legalized it.