Trump Picks a Regulator Who Could Help Reshape Dodd-Frank Act

In appointing Mr. Giancarlo to run the Commodity Futures Trading Commission, which regulates the sort of derivatives trading that spread panic on Wall Street in 2008, the president took another step toward challenging the Obama administration’s legacy on financial regulation. As a Republican commissioner at the agency since 2014, and more recently as its interim chairman, Mr. Giancarlo has embraced the broad goals of new derivatives regulations under the Dodd-Frank Act while criticizing crucial portions of the fine print.

His nomination follows Mr. Trump’s signing of an executive order in February that takes aim at Dodd-Frank, the financial regulatory law crafted by the Obama administration and passed by Congress after the crisis. The order directed the Treasury Department to identify whether existing regulations align with the new administration’s goals, including fostering “economic growth and vibrant financial markets.”

While the president cannot unwind Dodd-Frank with the stroke of a pen, and while Senate Republicans most likely lack the votes to pass a sweeping overhaul of the law, regulators like Mr. Giancarlo could move to ease some of its rules. That bureaucratic process would take several years, but the regulators may leave their mark all the same.

Mr. Trump’s selection of Mr. Giancarlo — and before that, his selection of Walter J. Clayton, a corporate lawyer with a Wall Street client list, to run the Securities and Exchange Commission — underscores the administration’s effort to adopt a posture far friendlier to businesses than that of President Barack Obama’s administration. Like Mr. Giancarlo, Steven Mnuchin, Mr. Trump’s Treasury secretary, has expressed a willingness to preserve some aspects of Dodd-Frank while reshaping others.

Taken together, the appointments and the executive action suggest that Mr. Trump, despite having struck a populist tone during the campaign, is working to accommodate Wall Street and other large corporations. Since using campaign speeches to take aim at banks like Goldman Sachs as members of the global elite, he has hired a number of former Goldman employees in his administration. The White House announced on Tuesday that it would nominate James Donovan, a managing director at the bank, to be deputy Treasury secretary, joining Mr. Mnuchin, himself a former Goldman employee.

And as Mr. Giancarlo heads to a confirmation hearing with the Senate agriculture committee, Democratic lawmakers could resurface concerns about his past work on Wall Street.

Yet Mr. Giancarlo has kept a more open mind on Dodd-Frank than President Trump, who has called it “a disaster” and promised to do “a big number” on it. In contrast, Mr. Giancarlo recently said that “I publicly support the core reforms” of Dodd-Frank’s derivatives rules, including new oversight for big banks and a requirement that many trades pass through regulated clearinghouses.

“I believe in the power of markets to be somewhat self-correcting, but I also truly believe in regulation and the role of regulators,” Mr. Giancarlo said in a recent interview.

With the nomination of Mr. Giancarlo, President Trump has now established his core group of financial policy makers. The heads of the nation’s top banking regulators, including the Federal Deposit Insurance Corporation, are holdovers from the Obama administration and are expected to remain in office until their terms expire many months from now.

The Consumer Financial Protection Bureau faces a more uncertain future, with some congressional Republicans urging Mr. Trump to remove the agency’s leader, Richard Cordray, an Obama appointee whose term does not expire until next year.

While less prominent than those agencies, the Commodity Futures Trading Commission gained new power and relevance after the crisis, when derivatives nearly toppled the giant insurance company American International Group. The company ultimately needed a huge government bailout to survive.

Dodd-Frank imposed new rules and oversight on derivatives trading, a market that is valued at up to $700 trillion and that allows companies to either speculate in the markets or protect against risk. In doing so, Dodd-Frank provided a mandate for the trading commission to police the market, leading to a flurry of new rules from the agency’s chairman at the time, Gary Gensler.

Under Mr. Gensler and his successor, Timothy G. Massad, the agency also ramped up its investigations of wrongdoing, leading to some high-profile enforcement actions. 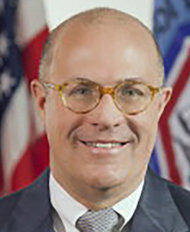 J. Christopher Giancarlo has embraced the broad goals of derivatives regulations under the Dodd-Frank Act while criticizing crucial portions of the fine print.

But Mr. Giancarlo, an avid banjo player who was trained as a lawyer, has already lost some of the top legal aides who guided the agency through these cases and rules.

Jonathan Marcus, the agency’s general counsel, stepped down, as did the director of enforcement, Aitan Goelman.

And early this year, the agency struck a $5 million settlement with Jon S. Corzine, the former Democratic governor of New Jersey who was running the brokerage firm MF Global when it collapsed in 2011.

Mr. Giancarlo has not named Mr. Goelman’s successor, but he did say in the recent interview that “I’m looking for someone with a similar set of seriousness,” not someone who only did “10 years of white-collar defense.”

And in another potential sign of his interest in enforcement, Mr. Giancarlo is said to have pressed for stiffer penalties against Mr. Corzine.

Mr. Goelman said Mr. Giancarlo supported the enforcement division’s efforts as a commissioner and predicted that his support would not wane.

“The biggest political fights at the commission are not going to be around enforcement cases,” Mr. Goelman said.

Mr. Giancarlo’s support of certain rules is less guaranteed. Already, he announced that the agency would not punish Wall Street banks, at least for six months, for not collecting extra money from customers like pension funds to cover potential losses from certain trades. He did so with the blessing of the agency’s Democratic commissioner but also at the urging of industry trade groups.

And although he often sided with other Dodd-Frank rules, Mr. Giancarlo voted against a recent proposal to extract more information from high-frequency trading firms. He has chastised the agency for being “stuck in a 20th-century time warp.”

On one of the issues most dear to liberal lawmakers — imposing limits on speculative commodities trading, which some critics blame for inflating grocery prices — Mr. Giancarlo has struck a cautious path. After calling the Commodity Futures Trading Commission’s proposed position limits plan “highly inadequate,” he supported an effort last year to repropose a new version of the rule.

Perhaps foreshadowing some opposition to his nomination, Mr. Giancarlo caused a stir when an agency advisory committee that he sponsors — a group largely made up of representatives from the financial and energy industries — published a nonbinding report recommending that the agency abandon its proposed rule on position limits. Amid an uproar, Mr. Giancarlo withdrew the report, but not before drawing the ire of Senator Elizabeth Warren, a Massachusetts Democrat who slammed it as “nothing more than a recitation of industry talking points.”

Even before that, Ms. Warren took aim at Mr. Giancarlo’s experience working at GFI, a brokerage firm that the trading commission regulates. In a 2015 letter to Mr. Giancarlo, she cited “potential ethics and conflict of interest concerns.”

In the interview, Mr. Giancarlo said the advisory committee incident had taught him “an important lesson — and that’s that appearances matter.”

He added: “I’m willing to learn. This is my first time in government.”