Trump a ‘Moral Dilemma’ for Black Republicans After Charlottesville

WASHINGTON — Gregory Cheadle, the man whom Donald J. Trump famously called “my African-American” at a California campaign rally, watched this month as now-President Trump praised the “very fine people on both sides” of the deadly melee in Charlottesville, Va., and he decided that possessive word “my” was in grave danger.

His backing for the president is on “life support,” he said.

Shermichael Singleton’s support has flatlined. Mr. Singleton was fired from his job as a senior adviser for the Department of Housing and Urban Development in February after previous writings critical of Mr. Trump came to light, yet he remained supportive. No more.

As the president headed to Phoenix on Tuesday to preach national unity at a campaign-style rally, even ardent supporters in the African-American community said the ties that once connected them to Mr. Trump had frayed badly.

“These people,” he said, “were waving Nazi flags.”

About a dozen interviews with black conservatives like Mr. Singleton revealed the tough question they are wrestling with: How can blacks who have defended the Republican Party against accusations of racism for decades remain loyal to a president who has, wittingly or unwittingly, boosted and buoyed the racists?

Some have answered by withdrawing their support. The only black Republican in the Senate, Tim Scott of South Carolina, criticized Mr. Trump by telling Vice News that his “moral authority is compromised.”

Some black conservatives, prominent and not-so-prominent, are weighing whether to leave the party altogether because they fear that under Mr. Trump’s leadership, Republicans may be complicit in espousing racism. Even after the ouster of Stephen K. Bannon, who as the president’s chief strategist was accused of pushing white nationalist views into the West Wing, they say that Mr. Trump has to reckon with his response to the violence and his history of taking controversial racial stances. 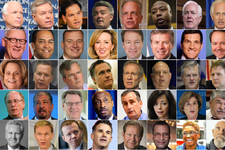 Graphic | The People in Trump’s Orbit Who Rebuked Him After Charlottesville Republican lawmakers and other leaders have distanced themselves from President Trump since his comments on the white nationalist rally in Charlottesville.

If he wants absolution, they say, he needs to show contrition.

Many black Republicans and their families have personally experienced racism — and in some cases witnessed violence perpetrated by the Ku Klux Klan and other supremacist groups that lynched thousands of people, beat and murdered civil rights marchers, and supported segregationist policies that held African-Americans back.

Black conservatives balked at Mr. Trump’s lament that it was “sad to see the history and culture of our great country being ripped apart with the removal of our beautiful statues and monuments” as an uncompromising defense of Confederate memorials.

And they fretted that he and his administration have made “law and order” a centerpiece of their response to Charlottesville.

“The ‘tough on crime’ phrase in my mind is nothing more than a code phrase for imprisoning blacks and people of color,” Mr. Cheadle said, before criticizing Mr. Trump for hiring only a handful of black people in the West Wing. “Mr. Trump waxes eloquent about providing jobs as the panacea for the racial divide and curing the woes of the inner city. The president would do well to lead by example.”

The majority of black Republicans interviewed said they would continue to support the president even as they criticize him. Most said they hope that Mr. Trump will prove his critics wrong and usher in a new phase of conservative policies that will overhaul the tax code, create new jobs, transform the health system and revamp the country’s entitlement programs.

Several polls show that the majority of Republicans agreed with Mr. Trump’s response, despite the intense backlash he received. And some African-Americans are in that camp.

“I don’t know that you can designate everybody who went to the rally from the camp of KKK as being nasty, mean, or say that their intention is to physically assault people,” said Chuck Linton, 70, a retired military veteran from Baltimore and an African-American. “I know that a lot of them, their intention is to be violent, but I don’t think all of them are.”

“The white supremacists and the left wing, and the right wing and the middle wing are all the same anyway,” he scoffed.

Interactive Feature | Sign Up for the Race/Related Newsletter Join a deep and provocative exploration of race with a diverse group of New York Times journalists.

But for Gianno Caldwell, a Republican political consultant whose grandfather moved to Chicago from Arkansas in part to escape the Klan, Mr. Trump’s response to Charlottesville was personal. Mr. Caldwell said he could not sleep the night of the raucous news conference when the president adamantly defended his “blame on both sides” position. He wept the next day on Fox News.

“I knew after the news conference that he was going to want to see some positive coverage, probably some black folks in front of the screen saying really nice things about how he is awesome and he rocked that news conference,” Mr. Caldwell said of Mr. Trump. “And I certainly wasn’t going to be used as a puppet.”

Mr. Caldwell added that it was “hard to defend President Trump when you know that no matter what happens in some days or weeks, he is going to step on the message and say something ridiculous and change the conversation.”

Going forward, he said, “If there is a position that I can agree with him on, I will, but it is going to be with a much more critical viewpoint then there was before.”

His position echoed Mr. Scott, who followed his Vice interview by saying on CBS’s “Face the Nation” that the president could “regain” his moral authority by sitting down with “folks who have a personal experience, a deep connection to the horror and the pain of this country’s provocative racial history.”

Quardricos Driskell, a Republican federal lobbyist and a religion and politics professor at George Washington University, never supported the president and said he believed early in the campaign that Mr. Trump held discriminatory views.

“The moral dilemma I face at this very moment and the question I have to wrestle with is Trump being the head of the Republican Party and yet courting and being complicit with this very small group that has always been at the fringes of our society,” said Mr. Driskell, who remains a Republican. “He has now helped to usher them into the mainstream. What does that mean as a black man who happens to be a Republican and happens to believe in conservative values and principles?”

“We are in the predicament that we are in now because of the fact that people did not read the writing on the wall,” said Tamika D. Mallory, a gun control activist and a chairwoman of the Women’s March on Washington.