Treasury Nominee Vows No Tax Cut for Rich. Math Says the Opposite.

Rules are made to be broken.

And that may be the problem with the newly christened “Mnuchin rule” — the assurance given by President Trump’s nominee for Treasury secretary, Steven T. Mnuchin, that “there would be no absolute tax cut for the upper class.”

Mr. Mnuchin initially made the statement during an interview on CNBC in November, but at his Senate confirmation hearing last month, Senator Ron Wyden, an Oregon Democrat, rebranded the comment as a “rule,” transforming a throwaway line into a formal pledge by the new administration.

Yet it is a guarantee that appears impossible to fulfill either under the tax overhaul that the House Republicans are pushing or similar, sketchier proposals that Mr. Trump has offered.

Redesigning the tax code with an eye fixed on lower rates has been a Republican mission for decades, and one that Mr. Trump adopted. That prospect combined with a promised regulatory retreat has pumped up the stock market and fueled optimism among business leaders.

At the same time, the president has raised expectations among his working-class supporters that “the rich will pay their fair share,” and that “special-interest loopholes that have been so good for Wall Street investors, and for people like me, but unfair to American workers” will be eliminated. Mr. Mnuchin, soon to be one of the administration’s top economic policy officials, promised “a big tax cut for the middle class.”

Yet analyses of the president’s and the House Republicans’ plan consistently conclude that the wealthy will receive the largest tax cuts by far. 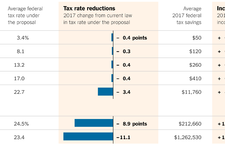 Start with the House blueprint, which at the moment is the closest thing to a working draft that exists. The nonpartisan Tax Policy Center, a joint project of the Urban Institute and Brookings Institution, found “high-income taxpayers would receive the biggest cuts, both in dollar terms and as a percentage of income.”

How big? “Three-quarters of the tax cuts would benefit the top 1 percent of taxpayers,” if the plan were put into effect this year, it said. The highest-income households — the top 0.1 percent — would get “an average tax cut of about $1.3 million, 16.9 percent of after-tax income.”

Those in the middle fifth of incomes would get a tax cut of almost $260, or 0.5 percent, while the poorest would get about $50.

That split would worsen down the road, the Tax Policy Center says: “In 2025 the top 1 percent of households would receive nearly 100 percent of the total tax reduction.”

Those wary of any potential liberal bias could turn to the conservative-leaning Tax Foundation. Its analysis found a smaller gap between the wealthy and everyone else, but a gap nonetheless. The foundation concluded that four out of five taxpayers would see only a 0.2 to 0.5 percent cut in after-tax income, while those in the top 1 percent of the income scale would save at least 10 times as much, or 5.3 percent. That’s nearly $40,000 extra for those at the top, compared to $67 for those smack dab in the middle of the income scale.

“The Mnuchin rule is already being broken as Republicans look to strip away hundreds of billions of dollars in Affordable Care Act tax credits for working Americans to pay for a giant tax break for the wealthy,” Senator Wyden said. “Bottom line is it’s unfair to cut benefits that the middle class depends on, all so the wealthy pay a lower rate.” 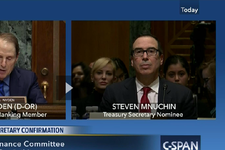 Mr. Mnuchin has not responded to a request for comment.

Republicans argue their plan makes everyone a winner — that lower taxes will unleash an enormous swell of economic growth, raising wages, incomes and tax revenue all around.

The historical record does not offer much support for the claim that slashing taxes for the most affluent creates growth. Yet even assuming the rosiest of forecasts, the top 1 percent, according to the Tax Foundation, would still receive close to a $100,000 tax cut — 32 times as much as a middle-income family.

Mr. Mnuchin has offered his own formula for adhering to the standard he laid down, explaining that an “absolute tax cut” for the wealthy would be avoided by closing fat loopholes.

“Any reductions we have in upper-income taxes would be offset by less deductions,” he said.

That would require some otherworldly mathematical magic, however.

Consider the list of proposals that would reduce the rich’s taxes:

■ Cut taxes on capital gains, 70 percent of which flow to the top 1 percent.

■ Eliminate the estate tax, which applies to a tiny number of people, couples that have estates bigger than $10.8 million.

■ Eliminate the 3.8 percent surtax on high earners’ investment income that has been used to subsidize health care for poorer Americans.

■ Lower taxes on cash flow and income that passes from small businesses to their owners, which also primarily benefits wealthier Americans.

Now, what deductions could be eliminated that would offset all those cuts at the top? There aren’t many, said Alan Viard, an economist at the conservative American Enterprise Institute. If Republicans insist on lowering taxes on top wages, capital gains, estates and cash-flow and pass-through income as advertised, “there’s not a lot of latitude to limit itemized deductions further,” Mr. Viard said.

Any plan to curb itemized deductions would be partly offset by Mr. Trump’s plan to increase the standard deduction. Curtailing mortgage deductions for the most expensive homes is probably a good idea, Mr. Viard said, but that isn’t going to do much to raise revenue from those at the top of the income pyramid, and the deduction is already capped at $1 million.

Such alternative ideas, however, assume that the Mnuchin rule will have a meaningful impact on what the White House will propose or Congress will debate. Not everyone is convinced that it will. As Mr. Viard said, “I don’t know how much interest there is in fulfilling that statement by Mnuchin, however it’s interpreted.”