It is the question on the minds of many in the New York City area: Why is a relatively minor train derailment still wreaking havoc on my commute?

Two days after a New Jersey Transit train derailed at Pennsylvania Station in New York on Monday, eight of the 21 tracks at the station, North America’s busiest, remained closed on Wednesday, prompting a third day of travel chaos across the region.

Officials at Amtrak, which owns Penn Station, said they were working to repair damage caused by the derailment but warned that service might not be fully restored until Friday.

Minor train derailments are not uncommon, but this one occurred at one of the worst possible spots: a switch point where multiple tracks connect and space for workers making repairs is tight.

So far, the investigation into the derailment has focused on the condition of the tracks, rather than on human error or mechanical problems with the train, according to an official in New Jersey who was briefed on the inquiry but who was not authorized to discuss it publicly. The infrastructure damage caused by the derailment was extensive, totaling more than $1 million, the official said.

On Wednesday, Scot Naparstek, Amtrak’s chief operating officer, said in an interview that the investigation was continuing and that he did not want to draw conclusions about what had caused the derailment. He apologized again to the thousands of passengers inconvenienced by the accident.

“We are committed to doing everything we can to make the fixes we need to do and make sure we’re maintaining the station correctly,” he said.

In a subsequent statement, Charles W. Moorman, Amtrak’s president, said the railroad had asked the Federal Railroad Administration, which is also investigating the derailment, to join in a “thorough review of infrastructure at Penn Station to evaluate current conditions.”

The derailment on Monday was the second in the same area at Penn Station in less than two weeks. Amtrak officials have not identified the cause of the earlier accident either but said the two episodes did not appear to be related.

The derailments have focused scrutiny on Penn Station’s aging infrastructure, which is particularly vulnerable to disruptions and provides little flexibility when problems arise. The station is increasingly being overtaxed by the 600,000 passengers and 1,300 trains that pass through it each day.

Even a small hiccup can prompt a cascade of delays across the three railroads that use Penn Station: Amtrak, New Jersey Transit and the Long Island Rail Road. Such delays force more commuters onto already crowded buses and clogged roadways.

On Wednesday, officials at New Jersey Transit and the Long Island Rail Road blamed Amtrak for the commuting mess and urged officials there to work quickly to restore normal service.

Steven Santoro, New Jersey Transit’s executive director, said at a news conference that Amtrak had to be at fault because his agency’s investigation of the cars involved showed that their safety inspections were up to date. “The bottom-line message is Amtrak needs to step up to the plate,” he said. 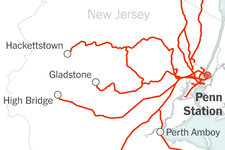 Transit advocates have long called for a new tunnel under the Hudson River and additional train tracks near Penn Station to provide more reliable service.

“The sad truth is this was all very foreseeable,” said Thomas K. Wright, president of the Regional Plan Association.

Beginning in the 1990s, New Jersey Transit undertook major improvements to its rail network to make it easier for commuters to get into Manhattan. A ridership boom followed. Amtrak and the Long Island Rail Road have also seen their ridership grow.

“This all relied on the assumption that at the end of the day, capacity under the Hudson River would be increased to handle this growth, and it hasn’t,” Mr. Wright said.

Instead, in 2010, Gov. Chris Christie of New Jersey canceled a plan to build a new tunnel under the Hudson River. Mr. Christie, a Republican, now supports a new project known as the Gateway tunnel, but its future is in doubt after President Trump recommended slashing federal financing for new transit initiatives.

In the derailment on Monday, three middle cars of a slow-moving train jumped the tracks. Railroad administration officials have expressed concern about the two recent episodes and are working with Amtrak and New Jersey Transit to improve safety and limit future disruptions.

“In general, many times it’s a track problem,” said James E. Hall, a former chairman of the National Transportation Safety Board. “In this case, at a low speed inside the terminal, it’s very difficult to know without a full investigation.”

Augustine F. Ubaldi, a railroad engineering expert who is not involved in the inquiry, said several problems related to the tracks could be to blame, including a possible widening of the gap between the two rails that form a track. As rails push apart, each train car passing above may be affected differently, he said.

“It could be the first car got across it, and the next couple of cars didn’t,” he said. “Once that one car goes off the tracks, then the other cars will follow.”

As for why repairs were taking so long, officials said the derailment happened at a delicate interchange near the Hudson River tunnel where trains arriving from New Jersey navigate to their assigned platforms at Penn Station.

The derailed train first had to be put back on the tracks and removed from the scene. Workers then had to make repairs to damaged equipment on the tracks while trains passed nearby, Mr. Naparstek said. Energized power lines overhead posed another challenge.

“Space becomes our largest constraint,” he said. “We can’t just throw more people at it; there’s not enough space to work safely.”

The repairs required the use of a crane to remove and replace a damaged switch, he added. Vacuum trucks cleaned out ballast. Timber ties also had to be replaced.

“Our plan is to work around the clock until we have the repairs done,” Mr. Naparstek said. “We are forecasting at this point that we hope to be back at full capacity at the station by Friday.”