The Biases That Keep Good R&D Projects from Getting Funded

The researchers explored how organizations decide to invest in different innovations by studying a large professional service firm with offices in 37 countries. They analyzed all of the R&D project proposals submitted by its staff, including information about which projects received funding, and found that managers don’t always carefully weigh the pros and cons of each project and that biases can creep into the decision-making process. They found that there is a sweet spot of novelty that makes R&D committees more likely to fund a project, and that certain characteristics of the R&D selection committee can also influence funding decisions. 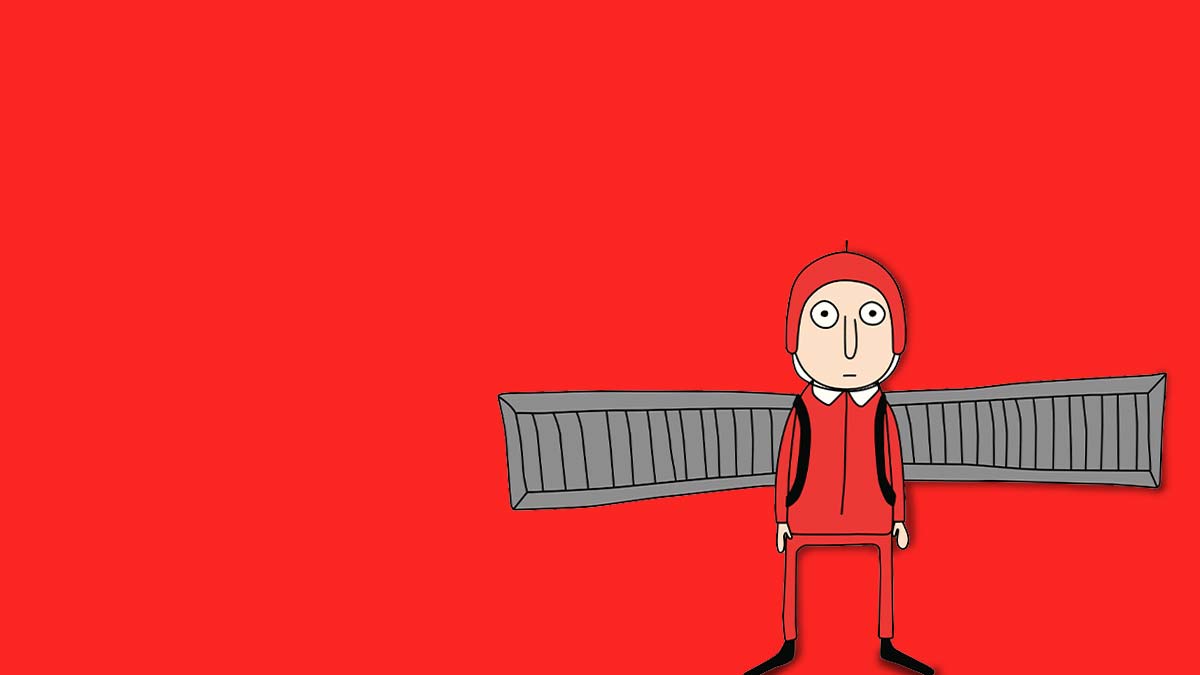 Theodora chairs the R&D selection panel at a global professional service firm. She recently had to lead the committee in deciding whether to fund a proposal from an up-and-coming engineer and one of the company’s business leaders. The project focused on how to design rooms in intensive care units to minimize sleep disruption and facilitate healing. Gerhard, from the infrastructure group in Munich, started the discussion: “This project is just too out there. It is not really what we do.” Frank, an expert in water engineering from the consulting unit in Edinburgh, said, “Funding should be sought for client work. This is not going to generate much benefit for the organization.”

But Julie from the London office, who has focused on designing public buildings, countered, “Sure, it is a bit off topic, but the area was mentioned in our R&D strategy last year. My office is getting increasingly involved in design work for hospitals.” Gerhard noticed that the R&D budget was nearly spent for the year and suggested that the project was “a nice-to-have, rather than a need-to-have.” Theodora compromised: “Let’s fund the project at 30%. Is that OK?” The panel members nodded and moved on to the next proposal.

This story is fictional, but it is based on our observations of managers deciding whether to fund new projects. We set out to explore how organizations decide to invest in different innovations. There is little data on this, because these decisions tend to be made behind closed doors. But in studying a large professional service firm with offices in 37 countries, we were able to get access to all of the R&D project proposals submitted by its staff, including information about which projects received funding.

In this company – like in many other large organizations – a panel of different managers and engineers comes together to discuss what they think is worth funding. We studied 556 different project applications, and conducted interviews and observations inside the company. Our findings, recently published in the Academy of Management Journal, are that managers don’t always carefully weigh the pros and cons of each project and that biases can creep into the decision-making process.

The sweet spot of novelty

R&D selection is not always based on objective estimates of a project’s costs and returns. We found that funding decisions in this organization were influenced by how novel a project seemed. Proposals that were deemed either too novel or not novel enough got little or no funding. In other words, there is a sweet spot of novelty that makes R&D committees more likely to fund a project. (This has been found in other contexts too, such as academia.)

If a project strayed too far from the company’s main activities, or if it seemed too difficult to commercialize, it wasn’t funded. If the idea was considered to be too incremental, such as one that aimed to improve existing processes, it met the same fate. However, projects that found a new way to serve increasing client demand, perhaps by stretching existing capabilities, fell into the sweet spot of novelty and received funding. 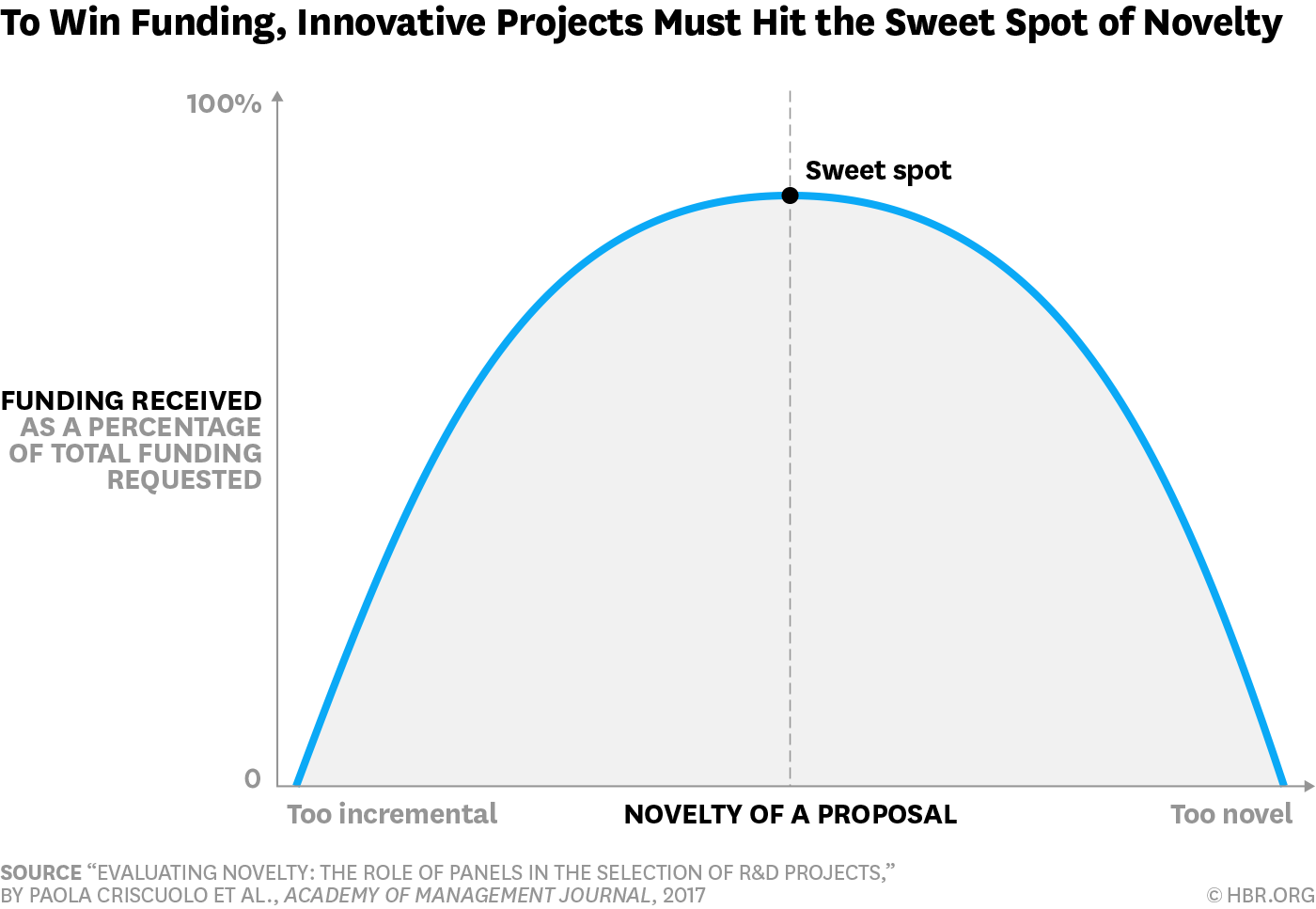 The biases that affect panel members

Projects aren’t simply evaluated on merit. We also found that three characteristics of the R&D panel can influence funding decisions:

Workload: When the selection panel has to evaluate many proposals in one meeting, they are less likely to fund novel projects that lie beyond the sweet spot. This is likely because assessing new ideas takes more time and effort. For instance, one panel we studied had to assess more than 60 project proposals in a single meeting. But when panelists only had to evaluate 30 projects, they funded three times as many highly novel projects.

Diversity:  We measured expertise diversity, or whether people have expertise in multiple areas. The more diverse the panel is, in terms of expertise, the more likely it is to provide funding to a very novel project. Diversity increases the likelihood that the members of the selection panel will look at multiple facets of a proposed project. For example, one of the panels we observed had selectors with backgrounds as diverse as acoustics, structural engineering, sustainable building design, and fire engineering. This panel could assess the value of highly novel R&D proposals that spanned a broad range of engineering disciplines; they were better able to see their potential applications for an equally wide range of clients.

Location: The panel’s willingness to accept novelty decreases when the project applicant is in the same location as one of the panel members. There are at least two reasons that can explain this. First, to avoid being accused of favoritism, members of the selection panel might put proposals from people sharing the same location under more scrutiny, causing them to underestimate the benefits and to overestimate the costs of novelty. Second, panel members shy away from highly novel projects if they’re being proposed by people in their location, because more novel projects have a higher risk of failure and that could potentially harm the panel member’s reputation.

Our findings raise questions about the current practices companies use to select and fund R&D projects. The process in the company we studied is not unique. Many organizations use structured processes for evaluating their innovation projects and deciding which to fund and which to discontinue. But these practices may be limiting the number of groundbreaking ideas that ultimately get executed. History is rife with examples of organizations that have been exposed to novel ideas but failed to invest in them, as well as organizations that over-invested in ideas after failing to evaluate them properly.

The first step to alleviating these biases is to be aware of them, but there are also some actions managers can take to eliminate them. Overcoming some of these biases against novelty can help them better evaluate and spot potentially game-changing ideas.

To avoid the panel workload bias that prevents managers from seeking novelty, companies could limit the number of projects the selection committee has to screen at once. One strategy could involve “binning” projects, which means designating windows for people to submit proposals and then convening a selection panel when a “bin” is full, rather than at a set date or time of year. This way, sufficient managerial attention could be devoted to each project under evaluation.

To increase diversity of expertise, companies can involve external experts in their selection panels. For example, almost 10 years ago, GSK set up interdisciplinary Drug Performance Units to discover new medicines and develop them for early stage clinical trials. Each DPU developed a business plan with milestones to be reached within a specific period. A review panel, consisting of senior R&D managers in the company, as well as external experts with relevant expertise, periodically assessed their performance. In 2012, the panel was able to help GSK increase funding for six units that held promise, decrease funding for five units that weren’t yet meeting their targets, and eliminate three of the units that failed to deliver.

Of course, while novelty is important for finding and developing groundbreaking opportunities, managers should seek to balance their firms’ R&D portfolio, so that it includes projects with high and low levels of novelty. Less novel projects are usually easier to implement, less risky, and they generate more immediate benefits. At the same time, many companies under-invest in novel projects simply because managers err on the safe side. This is when it becomes important to think about how projects are being evaluated.

Decisions about R&D projects are signals of an organization’s strategy and its future. To make innovation a part of that, managers need to be aware of these biases and of what can be done to avoid them.