The $15 Million Flying J Party Mansion Up For Sale

In the early 1990s, Tamra Call and her husband, O. Jay Call, began to look for a vacation property that they could develop and eventually retire on. “It was a dream we had, to own a ranch,” Call said. Their criteria were, on the face of it, easily attainable: The property needed to offer some privacy, yet be less than an hour’s flight from the Ogden, Utah, headquarters of Flying J, (now FJ Management), the multibillion-dollar oil and refining, truck stop, banking and insurance business her husband had founded in the late 1960s.

That left a pretty large swath of the country: Much of Utah, Idaho, and Wyoming are within an hour of Ogden by private plane. The couple looked for two years, though, before they found a spot in the lush Paradise Valley, 10 miles south of Livingston, Montana, in the southwest part of the state. “We stepped onto that piece of land and knew it was the one we had to have,” Call said. 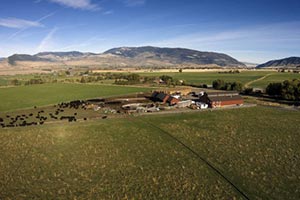 After modernizing the property (“I really hate to say run-down, but it was very much a project,” Call said), they began to build their own house, update the cattle facilities, and construct outbuildings. After her husband died in a plane crash in 2003, Call continued to buy land. “We just kept adding to it,” she said, estimating she has spent more than $12 million dollars on the ranch. Now remarried, Call has listed the property and is asking $15 million for its 1,750 acres.

The vast tract of land became Dancing Wind Ranch, with a functioning cattle operation that counts more than 230 cows, plus horses and bulls. The property includes 940 acres of grazing land, 310 acres of forest, 495 acres of irrigated meadows and five acres of buildings Call commissioned. 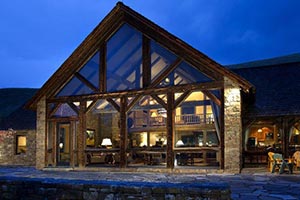 It’s the parties that Call remembers with the most fondness. The 8,000-square-foot main house, made of stone and completed by local architect Jonathan Foote in 1997, is surrounded by more than 2,100 square feet of granite patio on which guests can lounge outdoors during summer barbecues. The entryway includes a half-bathroom and a washing station for pets, and a massive great room comes with a gaming table, a cherry-wood bar and a pool table, all beneath vaulted ceilings. The house also has a media room, a gym, a formal dining area, and a three-car garage.

Most of the house, which has three en suite bedrooms — one master and two guest rooms — is on a single floor, and it was almost exclusively dedicated to entertaining. “We had a lot of fun functions there every year,” Call said. “We would have a costume party for Halloween and Monte Carlo-themed parties with game tables everywhere. It’s really functional for having a large crowd.” The kitchen, for instance, is part of a relatively open plan with the rest of the house, which means the hosts were never cut off from their guests. There’s also a large butler’s pantry, which Call said was her favorite part of the house.

Nearby is a refurbished barn, which Call said they also used as a party space, specifically for pig roasts in the summer. (The barn contains three horse stalls.) Elsewhere on the property, there’s a 2,700-square-foot, three-bedroom guest house, a 2,800-square-foot manager’s house, barns, stables and a helicopter storage hanger. In total, the property can sleep 12, not counting staff. 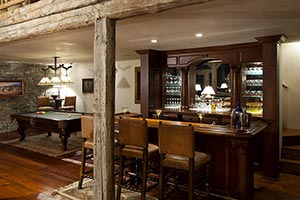 The property has been on and off the market for more than five years. “We put it on the market right when the market collapsed,” she said. She and her new husband decided to sell, she continued, because they now split their time between Utah and Arizona. “Our lifestyle has just kind of changed,” she explained.

Despite the ample grazing land, the property itself is mostly wild. Mountain streams — perfect for fly fishing—criss-cross the property. Elk herds, mountain lions, moose, and bears frequent the land.

Call is certain the property will sell, eventually. “It takes a special person,” she said. “There’s not a lot of people who like that lifestyle, who want to be in Montana, and who have the money to spend on something like this.”