Snap’s IPO will be the largest in years 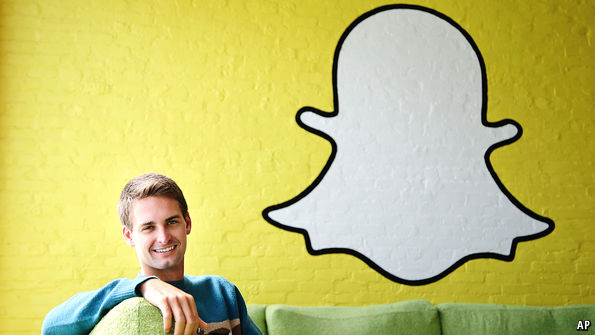 WHEN Snapchat first became popular in 2013, many thought the messaging app would disappear almost as quickly as its vanishing messages. Instead, it has become one of the most intriguing internet firms to emerge in years. When Snap, Snapchat’s parent company, goes public at an expected valuation of $20bn-25bn—the IPO is expected in March—its market debut will be the most closely watched since Alibaba, a Chinese e-commerce giant, floated in 2014. Snap’s offering documents may be filed publicly as soon as this week.

Snapchat has captivated youngsters in the West with its quickly disappearing content and playful features. It appears to have connected with youth more successfully than older rivals such as Facebook (or its messaging service, WhatsApp). Users share digitally enhanced photos and videos of themselves vomiting rainbows and morphing their faces into animal masks. Around 41% of Americans aged 18 to 34 use the ephemeral messaging service every day, and 150m people globally spend time on it every day.

Older grown-ups should pay attention too. Snapchat is experimenting with new technologies, such as augmented reality (AR) and wearable devices. A large share of people who have used AR will have experienced it on Snapchat, where users can overlay computer-generated images on photos and videos (see article).

The firm’s IPO prospectus is expected to describe not an internet or communications company but a “camera company”. Snapchat has prospered from access to the camera on every smartphone, and now it wants to sell hardware as well. Its new sunglasses, called Spectacles, sell for $130 and enable users to record video from their exact line of sight. They have caught the attention of analysts, who are impressed by the glasses’ ambition, functionality and clean design.

How well it fares as a public company will also serve as a litmus test of whether it is possible to prosper in the shadow of digital behemoths like Facebook and Google. Snapchat has a different outlook. Facebook creates permanent records of users’ lives; Snapchat offers liberating impermanence. On most social-media sites, people post about their achievements to a huge circle of acquaintances; Snapchat’s users share images of themselves looking silly with smaller groups of friends.

Snapchat started in 2011 as Picaboo. It was created by three members of a fraternity at Stanford University: Reggie Brown, Bobby Murphy and Evan Spiegel (now Snap’s chief executive). The app, which they later renamed, was not an overnight sensation that crashed the internet, as Thefacebook did at Harvard. It lay virtually undiscovered for some time, until high-school girls discovered it and started using the app to send (sometimes risqué) messages.

Mr Spiegel (snapped) has proven himself to be creative in devising new features for Snapchat’s app and in imagining how it might evolve. At first it was a one-to-one messaging function for people to send disappearing “snaps” to one another. Three years ago Mr Spiegel launched a one-to-many broadcast function, called “stories”, where people can string together images and videos and share them with all their friends at once. In 2015 it launched “Discover”, where professional publishers offer a selection of disappearing articles and videos tailored to millennials (The Economist publishes on Discover). These features offer elements of scarcity and urgency that bring people back repeatedly.

Snapchat has innovated in other ways, too. It shows users how many snaps they have sent and received since joining, and they try to keep this score high. It invented “streaks” that keep track of how many consecutive days friends have sent messages back and forth. When Braden Allen, a 16-year-old in Dallas whose tally of sent and received snaps stands at around 170,000, needed a break from Snapchat to study, he gave his login information to a friend to keep sending on his behalf.

Lenses are another distinctive feature. When people take selfies, they can choose to alter their appearance, becoming an animal, switching faces with a friend or doing other fantastical things with the app’s facial-recognition technology. Snapchat has quietly become the most-used augmented reality product in the world, says Ben Thompson of Stratechery, a research firm. 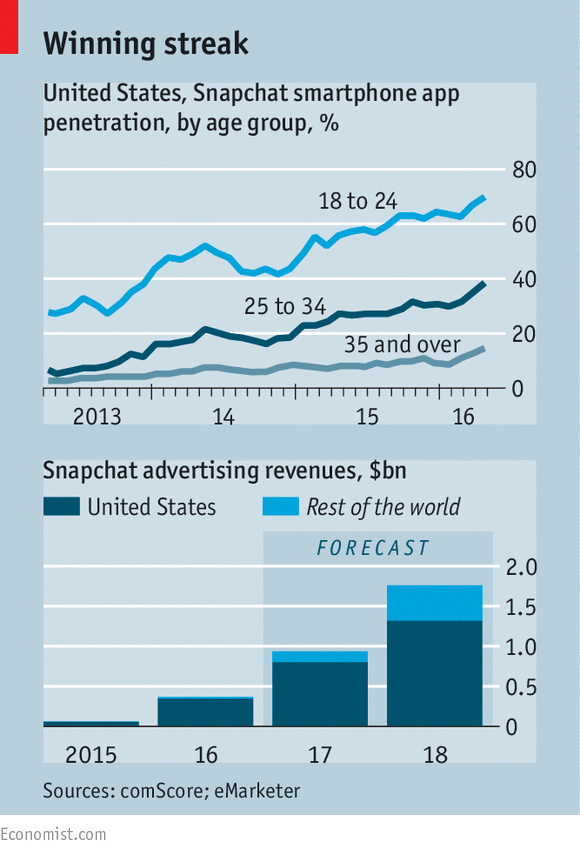 Although Snap encourages users to be silly on its app, it hopes to be taken seriously as a business. It will need to decide what approach it should take when using information about users to target ads. Mr Spiegel has called the practice “creepy” in the past. Yet Snap may need to share more data about its users; Mr Spiegel has indicated that he may be willing to do this.

The company has started to allow advertising in between users’ stories and in the midst of publishers’ articles on Discover. Brands can also buy sponsored lenses. For example, Taco Bell, a fast-food chain, paid for a lens that allowed users to change their faces into tacos. These promotions can be expensive, at around $550,000-800,000 for a lens that is available across America for a day, and can take some months to prepare. Snap insists on keeping some creative control, and can veto projects it thinks look too much like basic advertising. That has irked some brands in the past.

Snapchat is nowhere near earning the sort of ad revenues that Google and Facebook bring in. Those two scoop 58% of digital advertising in America and last year claimed nearly all of the market’s growth. One of the world’s largest advertising agencies spent $60m on Snapchat in 2016, compared with $1bn on Facebook. The same agency expects to spend $170m on Snapchat this year. Snap could have around $1bn of revenue in 2017, three times its total sales in 2016. Advertisers certainly welcome the prospect of having an alternative to the Facebook-Google duopoly, says Chris Vollmer of PwC, a consultancy.

Yet there are questions over how large Snapchat’s user base can become, and whether it can support the high stockmarket valuation that is talked of. The app has yet to establish that it has strong appeal for older users, for example. In emerging markets it costs more to use lots of data on smartphones, and Snapchat’s data-intensive app is less widely used. Brian Wieser, an internet analyst, reckons that Snapchat is an “important niche player” but that it will never achieve the scale of Facebook. It doesn’t have to target more than a billion daily users to be a valuable company, but Mr Spiegel will need to be careful not oversell the app’s potential reach, as Twitter did when it went public in 2013 promising to attract “the largest audience in the world”.

He has so far focused on Western markets, whose users are most valuable to advertisers, in contrast to Facebook and Twitter, which emphasise their global reach. He is expected to point to high user engagement with Snapchat, rather than relentless user growth, as the gauge investors should watch. This will require a shift in thinking for stockmarket investors, who have been trained by Facebook, Twitter, LinkedIn and several other internet firms to demand fast-growing audiences.

Snap’s profit margins in its various business lines may also disappoint: they are unlikely to be as generous as those of Google and Facebook, which both fulfil a lot of their ad orders using automated programmes. Because its ads tend more often to be individually designed, it relies on a large, human salesforce. Selling also takes more time, as it does in television.

Mr Spiegel will also need to prove his ability to lead. Many of his boosters compare him to the late Steve Jobs for his creative, perfectionist vision of products. He may resemble Mr Jobs in more negative ways, too. He is secretive and controls information tightly. No one but Mr Spiegel—not even the board and other top executives—knows all the important details of the firm’s strategy and future plans. He is off-limits to most employees and travels between Snap’s buildings in a black Range Rover with a security detail.

Some early backers also privately express concern that the talent pool behind him is not as experienced as they would like. Adult supervision will come from Michael Lynton, a seasoned entertainment executive, who is resigning from running the film studio of Japan’s Sony to serve as Snap’s chairman. But there are few like him at the company.

The competition against Facebook and Google (which owns YouTube, an online-video site, against which Snapchat will directly compete for ad dollars) is unlikely to let up. Facebook tried to buy Snapchat for $3bn in 2013, and has since then copied many of its popular features. Last summer Instagram, which is owned by Facebook, launched its own “stories” feature; its parent company is now testing the idea of rolling out this feature on its own social network. Usage of Snapchat stories has declined significantly since Instagram stories began. That could shake the faith of some Snapolytes, who believed that Snapchat had sufficient allure to keep its young users away from Facebook’s properties and those of other internet firms.

The public offering stands as evidence that Snap wants to stay independent. But Facebook or Google could still buy it. “That is why I would not short the stock,” says one hedge-funder, who is sceptical about the high valuation it is likely to receive. Mr Spiegel must know that his firm, as one of the only real threats to the two giants, would be a prize for either of them.

If Snap wants to survive as an independent firm, he may need to make some smart acquisitions of his own, as Facebook did by buying Instagram and WhatsApp. One opportunity may be visual search. Snapchat’s users are using their cameras to capture the world around them. When they point their smartphones at objects, they could be served with advertising. Only Mr Spiegel knows the plan. But in the highly concentrated internet ecosystem, companies increasingly must eat or risk being eaten. The coming years will show whether Snap is predator or prey.

Correction (February 2nd): The original version of this article misstated the frequency with which young Americans use Snapchat. This has been corrected.