Simplifying Shelter: Why Falling Home Prices Could Be a Good Thing

Suppose there were a way to pump up the economy, reduce inequality and put an end to destructive housing bubbles like the one that contributed to the Great Recession. The idea would be simple, but not easy, requiring a wholesale reframing of the United States economy and housing market.

The solution: Americans, together and all at once, would have to stop thinking about their homes as an investment.

The virtues of homeownership are so ingrained in the American psyche that we often forget that housing is also a source of economic stress. Rising milk prices are regarded as a household tragedy for some, and spiking gas prices stoke national outrage. But whenever home prices go up, it’s “a recovery,” even though that recovery also means millions of people can no longer afford to buy.

Homes are the largest asset for all but the richest households, but shelter is also a basic necessity, like food. We have a variety of state and federal programs devised to make housing cheaper and more accessible, and a maze of local land-use laws that make housing scarcer and more expensive by doing things like prohibiting in-law units, regulating how small lots can be, and capping the number of unrelated people who can live together.

Another big problem: High rent and home prices prevent Americans from moving to cities where jobs and wages are booming. That hampers economic growth, makes income inequality worse and keeps people from pursuing their dreams.

So instead of looking at homes as investments, what if we regarded them like a TV or a car or any other consumer good? People might expect home prices to go down instead of up. Homebuilders would probably spend more time talking about technology and design than financing options. Politicians might start talking about their plans to lower home prices further, as they often do with fuel prices.

In this thought experiment, housing prices would probably adjust. They would be somewhat cheaper in most places, where population is growing slowly. But they would be profoundly cheaper in places like super-expensive San Francisco.

That was the conclusion of a recent paper by the economists Ed Glaeser of Harvard and Joe Gyourko at the Wharton School of the University of Pennsylvania. The paper uses construction industry data to determine how much a house should cost to build if land-use regulation were drastically cut back. Since the cost of erecting a home varies little from state to state — land is the main variable in housing costs — their measure is the closest thing we have to a national home price.

According to them, a standard American home should cost around $200,000, a figure that includes the cost of construction, what land would cost in a lightly regulated market, and a modest profit for developers. In many places, that’s what the prices roughly are. But for a few metropolitan areas like San Francisco and Boston, homes are wildly overpriced, leading to distortions in the economy and labor market.

We would still see homes of different sizes and styles — condos in some places, single-family homes in others — depending on the market in each city. A New York home would be smaller than one in, say, Houston.

And prices would still vary from place to place, based on demand and geography. It’s easier to build in Phoenix (plenty of flat land), and harder in San Francisco (lots of hills and nearby water). But while building in the San Francisco metro area is more expensive than in other places, it’s not that expensive. By the paper’s calculations, a home in the San Francisco area should cost around $281,000.

The actual price for a standard home in the area is more like $800,000 (using 2013 data). The paper argues that most of that difference is caused by regulatory hurdles like design and environmental reviews that can add years to a project’s timeline and suppress the overall housing supply. The result is overpayment on a grand scale for the few homes that do get built.

People are sure to quibble with the economists’ calculations, but their general conclusion — that an abundance of new homes would result in lower prices — is not remotely controversial. Many studies, from the McKinsey Global Institute, California’s Legislative Analyst’s Office and others, have shown that California’s high home prices are largely a supply problem: The state doesn’t build enough homes.

There are counterexamples around the world. Tokyo has not had rapid home price appreciation because increases in demand are met with increases in new building.

So let’s carry on with this hypothetical. Say we opened the floodgate of development. What kind of effects could we expect? The economy would grow, and by a lot. According to a recent paper by the economists Chang-Tai Hsieh, from the University of Chicago’s Booth School of Business, and Enrico Moretti, from the University of California, Berkeley, local land-use regulations reduce the United States’ economic output by as much as $1.5 trillion a year, or about 10 percent lower than it could be.

That is a theoretical figure that includes easy-to-see things like increased sales of building materials and more jobs for construction workers. Most of the increase, however, would come from more abstract gains like increased wages for people who are willing to move from an economically distressed city to a faster-growing economy elsewhere, but are currently unable to because housing is too expensive.

Over time, the accelerated pace of building could lead to a long-run deflation in home values. But for the most part that would be limited to a few coastal cities. And while the older homeowners there would most likely be resentful of all the new apartments, condos and townhomes that caused their home equity to shrivel, younger people would have an easier time getting started. 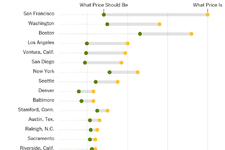 Graphic | Where Housing Costs Too Much In the priciest United States metropolitan areas, land restrictions that cap new development have pushed up prices.

Moreover, it’s likely that lower home prices would encourage workers to move farther and more often in search of job opportunities. The impact on mobility could be huge, as the $1.5 trillion figure shows.

There was a time, a few decades ago, when the cost of living did not vary all that much from city to city. Since then, as places like New York, San Francisco and Seattle have been hit with skyrocketing rents and home prices, the regional disparity in housing costs has altered how Americans of different incomes pursue opportunity.

Back when home prices were more even from place to place, people with different levels of education and income tended to flock to the same types of high-wage places, according to research by Daniel Shoag, a professor of public policy at Harvard, and Peter Ganong of the University of Chicago.

Today, people with less education tend to go where housing is cheap, like Las Vegas, while college-educated workers with skills that are in demand still go to places where wages are high, like the Bay Area.

That’s because lower-income people have little to gain by going to California’s coastal cities. Wages might be higher, but as the state’s poverty figures show, a better paycheck doesn’t help if it’s swallowed by rent. The loss of mobility makes income inequality worse, because lower-wage workers are effectively locked out of exactly those places where wages and the demand for workers are greatest.

Finally, if housing were plentiful and cheap, we would probably stop having big housing bubbles. One good way of describing a speculative bubble is a moment when society deludes itself into believing that something plentiful is scarce, or will soon be. In the mid-2000s, banks and homeowners came to believe that homes would be scarce in places like Las Vegas and Phoenix, even though there were enough materials, land and labor to keep building and building and building.

Housing is particularly prone to bubbles because, in contrast with other products, we seem to want it more when it is expensive and less when it is cheap. And no matter how many times we look out an airplane window to see vast acres of emptiness, we somehow still believe that land is a great investment because nobody is making more of it.

Homes would still hold a lot of value; they still might appreciate, if more slowly; and desirable neighborhoods would still seem relatively expensive. But there would probably be fewer manias in which people expect home prices to double in just a few years.

Just as we don’t expect to make a profit selling our cars, if we stopped thinking of our homes as big moneymakers, we would probably start focusing on building them faster and less expensively.

Jeff Wilson, a college professor turned entrepreneur who refers to himself as Professor Dumpster for the year he spent living in a metal trash container that he turned into a home, is trying to make this happen on a small scale. Mr. Wilson’s nascent company, Kasita, wants to produce a line of one-bedroom homes. They would be identical in size and bought for a single price, and could be placed on city lots that traditional developers are unlikely to be interested in.

Homes would be stacked together, creating de facto apartment buildings that could be built and unbuilt in a few weeks. Although that wouldn’t do much to help a family of four, it might take some pressure off the housing market by directing younger people to studios instead of having them pile in together, freeing up some three-bedroom apartments for families.

For now, Americans seem unlikely to embrace this vision on a large scale, and even if they did, it would take a long time to start seeing home prices drop or flatline. But mass-produced homes from the past — brick townhouses or bungalows that came from a Sears catalog — are now sought after, so this imaginary world needn’t be uglier, though it very well may be.

Also, even if homes were a lot cheaper, we would probably retain the societal benefits of homeownership: As Mr. Glaeser and Mr. Gyourko’s data shows, housing is already relatively affordable in the vast majority of American cities. So there is little reason to believe that people would desert overpriced neighborhoods if they suddenly became cheaper.

This does not mean that select places like New York’s West Village or San Francisco’s Mission District would suddenly be affordable — or that American cities would suddenly fill up with towering condominiums and blocks of identical rowhouses. Housing is a regional problem, spread across miles of cities and suburbs, so a lot of new development would probably occur in close-in suburbs where there is more land than people think.

Take Boston. The median Boston suburb has a minimum lot size of one acre, and many suburbs have minimum lot sizes of one home per two or four acres. That is a huge drag on the region’s overall housing supply, according to Mr. Glaeser.

Yes, adding more homes, even medium-density ones, would annoy people looking for less crowded quarters. But the nation as a whole would probably be better off, both in jobs and in financial security. The money not spent on housing could flow to other, possibly more productive, investments — like stocks in new companies or bonds for infrastructure projects.

Of course, our view of homeownership is so entrenched in our economy, our political system and our tax code that it would be impossible to change in a short time, and probably even in a long time. But there could be political and societal benefits. What if local decisions that today are dictated by fears of declining property values could instead be made with an eye toward what’s best for education or job growth?

The point of this thought experiment isn’t to embrace it full-on, but to open our eyes to the negatives of the national obsession of owning a home, expecting its value to rise, and using the levers of local government to keep neighborhoods as they are.