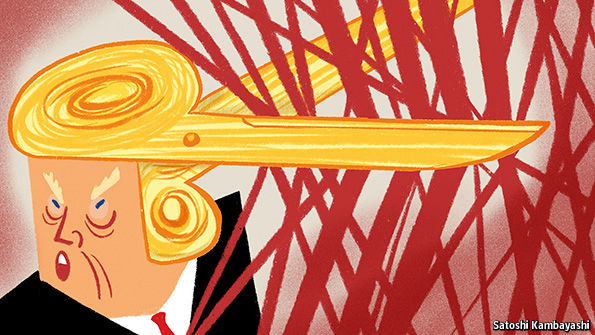 AT FIRST blush, there is little to be excited about. The eighth executive order of Donald Trump’s infant presidency, signed on February 3rd, lists seven “core principles” for regulating America’s financial system. These include the prevention of bail-outs by taxpayers; advancing the American interest in international negotiations; and tidying the unruly thatch of federal regulation. The treasury secretary and regulators must report by early June on how well existing laws fit the bill. “There is little in the actual executive order that the Obama administration would have disagreed with,” says Doug Elliott of Oliver Wyman, a consulting firm.

And yet. Although the edict does not mention the Dodd-Frank act of 2010, which redefined financial regulation after the crisis of 2008, it is chiefly aimed at that law. (Another presidential memorandum paves the way to aborting a rule tightening financial advisers’ obligations to Americans saving for retirement.) Many banks, especially smaller ones, loathe the 848-page act and its reams of ensuing rules. According to Davis Polk, a law firm, 111 of its 390 “rule-making requirements” have not yet even been finalised. Mr Trump has called Dodd-Frank a “disaster” and vowed to “do a big number” on it. How big a number his team has in mind—and how much it can manage—is still not entirely clear.

Thanks in part to Dodd-Frank, America’s banks are far safer than they were: the ratio of the six largest banks’ tier-1 capital (chiefly equity) to risk-weighted assets, the main gauge of their strength, was a threadbare 8-9% before the crisis; since 2010 it has been 12-14%. Among much else, the act also introduced stiff stress tests of the most important banks’ ability to withstand further storms; obliged them to draw up “living wills” to prepare for bankruptcy, should calamity strike; and banned them from trading in securities for their own profit, a restriction known as the Volcker rule.

Enough, say bankers. Mr Trump, though he bashed Wall Street on the campaign trail, now seems to agree. Gary Cohn, his chief economic adviser and president of Goldman Sachs until December, told the Wall Street Journal that because banks must “hold more and more and more capital…that capital is never getting out to Main Street America.” Dealing with multiple regulators, he said, was holding lending back. He also cast doubt on other bits of Dodd-Frank, notably its procedures for liquidating big banks when the bankruptcy code cannot be applied.

That echoes complaints voiced many miles from Wall Street. Wayne Abernathy of the American Bankers Association, a trade body, argues that community banks are shunning loans to new or marginal customers, rather than having to justify themselves to several regulators. “Lending is being narrowed down to mortgages, familiar customers and agriculture,” he says. This in turn exposes banks to another complaint from supervisors: that their lending is too concentrated.

In softening Dodd-Frank’s impact, administration looks easier than legislation. Dodd-Frank gives regulators power to intervene, but it also gives them discretion to desist, as Mr Trump may tell them to do. Rules not yet completed may be allowed to die; others enforced less vigorously; consistency among regulators can be encouraged. This may take time. Steven Mnuchin, Mr Trump’s choice for treasury secretary, is likely to be confirmed soon, but important lower-ranking jobs in the department, also needing senators’ approval, must be filled. Mr Trump also must find a vice-chairman of the Federal Reserve with responsibility for financial supervision. Once he does, Daniel Tarullo, the Fed governor who has been standing in, is expected by many to resign. Slots at other regulators are either vacant or soon will be.

The obstacles to changing laws are higher. Although the Republicans hold both houses of Congress, they have only a 52-48 lead in the Senate, shy of the 60 votes needed to break a filibuster. Persuading eight Democrats to support legislation making life easier for banks is a tall order.

Still, Mr Elliott notes, some bipartisan agreement in Congress is possible—notably on raising the threshold for a bank to be a “systemically important financial institution”, or SIFI, from $50bn of assets, to perhaps $250bn: the 34 SIFIs undergo annual stress tests and capital reviews conducted by the Fed. That would suit, among others, Zions Bancorp, a Utah-based lender with assets of $63bn—an improbable systemic threat. It has taken on nearly 500 staff to deal with compliance, internal auditing and so forth and spent many millions on quantitative models. These now underpin its decision-making about capital and lending, and Zions is not inclined to cut back on their use. But Harris Simmons, its boss, would like “relief from being subject to the Fed’s black box”.

Proposals that may affect the spending of public money, which require only a simple majority, could also be forced through. This could allow Republicans to rein in the Consumer Financial Protection Bureau, a body created by Dodd-Frank and financed by the Federal Reserve, rather than directly by Congress. It may also allow them to gut the liquidation procedure, which envisages a temporary fund of public cash—to purists, an unacceptable taxpayer bail-out.

Jeb Hensarling, a Republican congressman from Texas, is likely to reintroduce legislation he proposed last year, offering big banks less onerous regulation, including relief from the Volcker rule, in exchange for higher capital: a minimum leverage ratio—of equity to unweighted assets—of 10%. But this attempt may fail in the Senate. Few big banks are eager to return to proprietary trading in any case; and they think they have plenty of capital, thank you.

Thomas Hoenig, vice-chairman of the Federal Deposit Insurance Corporation, a bank supervisor, disagrees. “We need to have a simple way of measuring capital—the leverage ratio—and that ratio needs to be around 10%,” he says. In June the average for America’s eight globally significant banks was just 5.75%. With much stronger banks, other bits of regulation could fall away. Stress tests could be run by lenders themselves, rather than the government, and there would be no need for Dodd-Frank’s contentious liquidation procedure.