Reading The Game: The Flame In The Flood 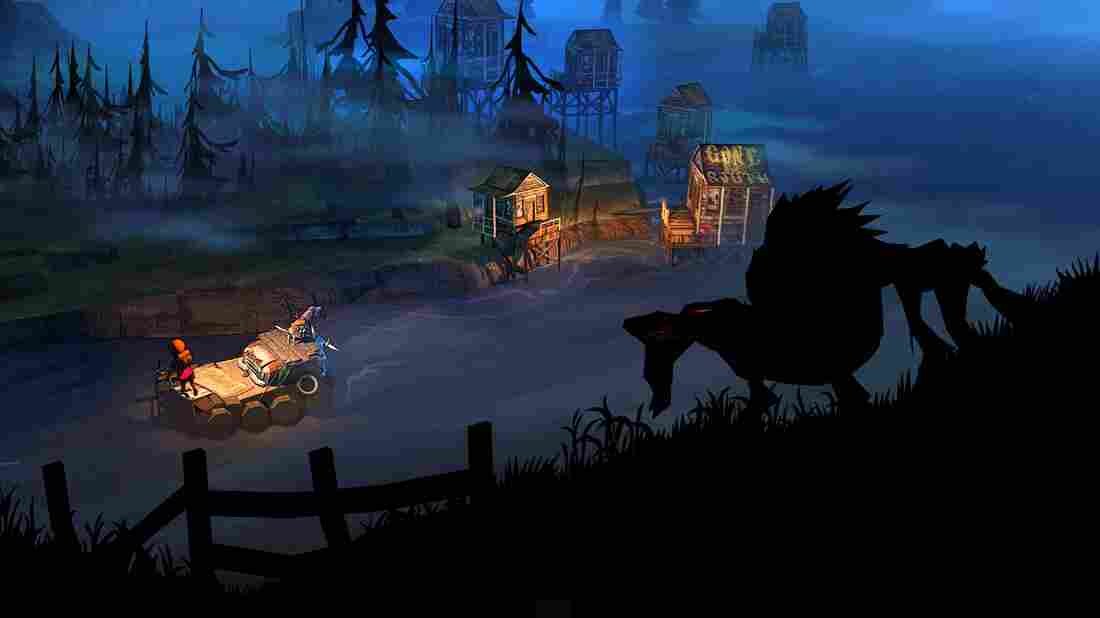 In The Flame and the Flood, you’ll die. A lot. (See that wolf?) But each time, you’ll learn something new. Courtesy of The Molasses Flood hide caption

Courtesy of The Molasses Flood

Let me tell you about the first time I died.

The dog, Aesop, had walked through the night, dragging a bag with nothing in it but an old radio and nothing on it but a strange patch marking it as someone else’s before it was mine. When I switched the radio on, I could barely hear the voice through the static. But it said evacuation. I was pretty sure of that. And evacuation meant people. Meant safety. Maybe. I was alone in the darkness. So I set off down the river to find a stronger signal.

Three days later, I died of, among other things, an infection I got from some thorns that I’d unwisely walked straight into. Also, I was pretty much dying of thirst — in the rain, on rickety raft on a river, which, I mean, the irony…

The Flame In The Flood is a short story, spare, elegant, graceful and contained.

Short stories are like magic to me. I’m fascinated by their economy, their density, their absence of distraction. If a novel is stage magic, orchestrated and showy, choreographed to draw that extended “Oooh …” from the crowd, then a short story is some grimy weirdo on the corner who comes on with nothing but a deck of cards and too many earrings. It is the quarter behind the ear. The disappearing ball. The poof-and-it’s-gone.

And that’s what The Flame in the Flood is: A short story, spare, elegant, graceful and contained. There has been some kind of disaster, and what sort is never mentioned. There is a girl named Scout and a dog and a raft and, always, the river, straining at its banks, swallowing more and more of the broken world even as you navigate its calms and rapids. Scout has one goal: go down the river to find … help? Evacuation? Salvation? All of that, maybe. Find sticks and flint to make fires. Find cattails to stuff in her shoes to stay warm. Nuts and bolts to keep her raft together. Scout has no enemies to fight, nothing standing between her and her goal except distance, the river and nature. But nature will kill the hell out of you every chance it gets because that’s how nature is. Merciless.

Let me tell you about the second time I died.

Wolf attack, out of nowhere. It was fast and it was brutal and it was over before I could do a thing. I’d lasted a week on the river. I thought I was doing so well.

The river is everything in The Flame in the Flood. Second to Aesop, it is Scout’s most constant companion. It carves its way through this post-apocalyptic South, dotted with its bait shacks (always a good place to scavenge hooks and fishing line) and churches and crumbling small town streets haunted now by wild pigs and yellow-eyed crows.

The river is also the engine of the plot. On your raft, you cannot go backwards. Can’t fight the current. So every hour, every day, you are swept deeper into danger. It gets colder. The animals grow bigger and hungrier. And then one day you find two feral children sitting outside a tumbledown church, who speak in a degraded American patois and talk about flying people and everyone gone away, but they also give you a rabbit they caught and you eat it, and it is the first real food you’ve had in two days so you can sleep comfortably, with a full belly, and hope that tomorrow it doesn’t rain.

But of course it rains.

Let me tell you about the third time I died.

The Flame in Flood is not some eternal survival simulator. It has an ending, but the game is new enough that I don’t want to spoil it. Also, it’s so good and so quiet and so perfectly, sweetly small that you should really fight your way through to experience it for yourself.

I was a badass now. A survivor. I wore that goddamn wolf’s fur as a hat. I had a bow and nine crow feather arrows, pounds of jerky stored against need. But in my confidence, I lost focus for just a minute and got snake-bit. Panicked. I was cold and needed to sleep. There was an old bus right there and all I needed was to warm up a little. But that was when I saw the bear. I ran and it chased me, broke both my legs, but I wasn’t dead. So I crawled, feverish and bleeding, for my raft where I had bandages and penicillin. But I didn’t make it.

Aesop stayed with me while I bled to death. That was day 48.

The Flame in The Flood is not some eternal survival simulator. It has an ending, but the game is new enough that I don’t want to spoil it. Also, it’s so good and so quiet and so perfectly, sweetly small that you should really fight your way through to experience it for yourself. You will die and die, guaranteed. But every time you do, you will learn. And as you travel you’ll meet the old man at the radio tower. You’ll walk on the rocket field and find evidence of other stories that ended sooner than your own.

And then, one bright and beautiful morning, you’ll see the banks of the river slide away into an impossible distance. You’ll come shivering up out of your bearskin and you’ll see the Gulf of Mexico stretching out before you and hear the beautiful, bluegrass score by Chuck Ragan swell and you’ll know you’ve reached the end of things. The final page. And with Aesop beside you, you’ll finally leave the river behind.

But the story will stick with you long after the game is done.

Jason Sheehan is an ex-chef, a former restaurant critic and the current food editor of Philadelphia magazine. But when no one is looking, he spends his time writing books about spaceships, aliens, giant robots and ray guns. Tales From the Radiation Age is his latest book.