PTA Gift for Someone Else’s Child? A Touchy Subject in California

SANTA MONICA, Calif. — Of all the inequalities between rich and poor public schools, one of the more glaring divides is PTA fund-raising, which in schools with well-heeled parents can generate hundreds of thousands of dollars a year or more.

Several years ago, the Santa Monica-Malibu school board came up with a solution: Pool most donations from across the district and distribute them equally to all the schools.

This has paid big benefits to the needier schools in this wealthy district, like the Edison Language Academy in Santa Monica, where half the children qualify for free or reduced-price lunch. The campus is decorated with psychedelic paintings of civil rights icons such as Cesar Chavez and the Rev. Dr. Martin Luther King Jr., the work of the school’s art teacher, Martha Ramirez Oropeza, whose salary is paid by the pooled contributions. That money has also funded the school’s choral program, teacher aides, a science lab and a telescope.

The funding program is considered a national model, and has many enthusiastic supporters. But for some locals it is a sore point that has helped fuel a long-simmering secession movement in which Malibu — more solidly affluent than Santa Monica — would create its own district, allowing it to keep all of its donations in its own schools. 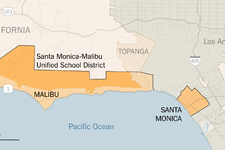 Craig Foster, a school board member from Malibu who favors separation, said parents voluntarily giving money wanted to see the fruits of their donations.

An ideal PTA system gives a parent “the opportunity to put your money where your heart is,” said Mr. Foster, a former managing director at Morgan Stanley and Credit Suisse. “It has to be an emotional appeal, and it has to be for the benefit of the donor.”

Indeed, the powerful appeal of helping one’s own child has turned the apple-pie PTA into a mirror of society’s larger stratification. According to a new report by the Center for American Progress, a liberal advocacy group, schools that serve just one-tenth of 1 percent of American students collect 10 percent of the estimated $425 million that PTAs raise nationwide each year.

And those schools, not surprisingly, are some of the least needy, according to the study, which analyzed PTA tax returns from 2013 and student demographics. The richest PTA in the nation, with $2 million in revenue, was at Highland Park High School in a suburb of Dallas, where no one qualified for free or discounted lunch. (Nationwide, about half of public school students are eligible.)

Only 9 percent qualified at the second-richest, Public School 87 on Manhattan’s Upper West Side, where the PTA’s revenue exceeded $1.5 million. The money was used to pay for dance, yoga, chess, and math and literacy coaching.

The issue has bedeviled policy makers who abhor the idea of unequal classrooms, but also do not want to discourage families from digging into their pockets. In California, for example, schools may depend on donations because the state’s Proposition 13, passed by voters in 1978, keeps property taxes relatively low.

Leaders at several overachieving PTAs also said their generosity addressed another kind of inequality: Their schools did not benefit from Title I, the federal taxpayer-funded program for schools that serve large numbers of poor children.

But Catherine Brown, a co-author of the report, said that when richer PTAs paid for teachers and programs that poorer ones could not afford, students in less well-off schools fell even further behind.

“Kids that come from needier backgrounds need more money,” she said. “They have more of a vocabulary gap before they even get to school, and their home environments are not as literacy-rich. They need greater investments in order to achieve their full potential.”

Only a handful of school districts nationwide, including Portland, Ore., and Palo Alto, Calif., have tried to put their fingers on the scale by restricting the use of PTA money at individual schools.

In New York City, PTAs may not pay for teachers of core subjects — English, math, science and history — so that all schools have comparable access to that instruction.

There is no shortage of affluence in Santa Monica or Malibu, two sun-kissed coastal communities with elegant homes and designer boutiques. At this year’s PTA gala for Point Dume Marine Science Elementary in Malibu, 10-person tables cost between $2,000 and $15,000. In an auction, parents could bid on a Las Vegas vacation, private chef services and a pink guitar signed by the Red Hot Chili Peppers.

But there is poverty, too; of the 11 elementary schools in the 11,000-student district, four in Santa Monica, including Edison, qualify for Title I aid. Half of Edison’s students come from low-income families, and three-quarters are Hispanic. (The school is not affiliated with EdisonLearning, the for-profit education company.)

The donation-balancing system was put in place in 2011 by the district’s crusading former superintendent, Sandra Lyon, and the elected school board. Malibu parents — and a few from Santa Monica — objected to the change, saying they worried that affluent families would stop giving altogether or flee to private schools. At one rowdy school board meeting covered by Malibu Patch, a local news website, a Malibu mother said the plan would “bring everybody to a mediocre middle ground that serves nobody.”

Parents can still donate to their own schools to cover expenses like campus beautification, technology and field trips. But those who wish to help pay for teachers’ salaries or school-day science and arts programs must now donate to the Santa Monica-Malibu Education Foundation, which redistributes the money across schools.

Total donations — between $4 million and $5 million annually — did not appear to drop in the first couple of years, according to tax returns for the foundation and 15 school-level PTAs, though more recent records are not available. But just 21 percent of Malibu families have donated to the central fund this school year, compared with 41 percent of Santa Monica families, according to foundation data through February.

Megan Histand, the PTA president at Franklin Elementary in Santa Monica, said that sharing parent donations across schools was “pragmatic,” since all the district’s students feed into two high schools, and that parents should want their children’s classmates to be academically and socially well prepared.

Still, some parents at her school, one of the wealthiest in the district, objected after their PTA gave $200,000 to the central fund when it was falling short of its fund-raising goal last year.

“The idea that a parent is helping another child without helping their own child is a myth,” said Ms. Histand, who has worked in theater production and, in addition to her labor running the PTA, is a stay-at-home parent.

But Mr. Foster, the only Malibu resident on the school board, called the centralized fund-raising system “ideological,” and said it was a poor fit for a district as divided and sprawling as Santa Monica-Malibu, which combines two discontinuous towns with schools up to 23 miles apart. During rush hour, it can take nearly an hour to make the drive up Route 1 between urban Santa Monica and beachy Malibu, and for decades, some Malibu activists have wanted to separate the district into two.

That movement accelerated after the new fund-raising system began. It gained another boost in 2013 when toxic PCBs were discovered in several Malibu schools and parents were dissatisfied with the district’s response. A school board vote on separation will take place this year, potentially followed by a referendum in each community.

Even if not universally beloved, the shared-donation program has become such an integral part of the district’s culture that some advocates of secession say that if Malibu becomes its own district, it should have a centralized donation system to equalize funding across the town’s four schools. They point out that disadvantaged children are in Malibu, too — about 12 percent of the student population qualifies for free or discounted lunch, compared with 30 percent in Santa Monica.

On a recent Friday morning at Juan Cabrillo Elementary School, which is perched on a hill overlooking the Pacific, Malibu parents watched their fifth graders put on a ballroom dance performance. The students had studied with a dance teacher from a local college, in a program paid for by the centralized donations distributed by the Santa Monica-Malibu Education Foundation.

The foundation also supports Cabrillo’s art, science and music programs. Several parents said they were grateful for the group’s support. But they think Malibu could pull in even more money if it separated from Santa Monica.

“I wish the kids could get more,” said Karen Clark, treasurer of the Cabrillo PTA — for example, dancing in the third and fourth grades, in addition to fifth grade. “We would do just fine” if Malibu became its own district, she said. “The Malibu community would be very generous.”