Parent Trap: A Secret of Many Urban 20-Somethings: Their Parents Help With the Rent

Almost half of people in their early 20s have a secret, one they don’t usually share even with friends: Their parents help them pay the rent.

Moving into adulthood has never been easy, but America’s rapidly changing labor market is making it harder to find economic security at a young age. Skilled work is increasingly concentrated in high-rent metropolitan areas, so more young people are tapping into their parents’ bank accounts.

According to surveys that track young people through their first decade of adulthood, about 40 percent of 22-, 23- and 24-year-olds receive some financial assistance from their parents for living expenses. Among those who get help, the average amount is about $3,000 a year.

It’s a stark reminder that social and economic mobility continues past grade school, high school and even college. Economic advantages continue well into the opening chapters of adulthood, a time when young people are making big personal investments that typically lead to higher incomes but can be hard to pay for.

The amount of help that parents provide varies by career and geography. Among young people who aspire to have a career in art and design, 53 percent get rent money from their parents. Young people who live in urban centers are more likely to have their parents help pay the rent.

The average amount of parental help for the 20-somethings — roughly $250 a month — covers 29 percent of the median monthly housing costs in America’s metro areas.

The choice of career path matters. Those in the art and design fields get the most help, an average of $3,600 a year. People who work in farming, construction, retail and personal services get the least. 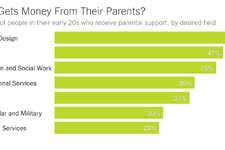 Graphic | Who Gets Money From Their Parents? Percent of people in their early 20s who receive parental support 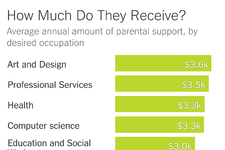 Graphic | How Much Do They Receive?

Patrick Wightman, an assistant professor at the University of Arizona who helped The Upshot analyze the data from a nationally representative cohort of more than 2,000 young people from 2007 to 2013, says this division has to do with the higher barriers of entry into fields like art, education, health and law. Some jobs in science, technology, engineering, management and law have clearer and more substantial payoffs after years of internships and postgraduate training. But pay in art, design and education is low in the early years, and for some people, it remains low.

Young people are also taking longer to graduate from college or technical school, if they graduate at all. Although two-thirds of high school students go to college, only half end up graduating.

“Someone who wants to go into graphic design or marketing requires a fair amount of time to get up to the point where you’re independent,” Mr. Wightman said. “Someone contemplating that kind of career isn’t going to take that first step unless they know they’re going to have that support to take an unpaid internship. If you don’t have other sources of support, that’s not even an option.” 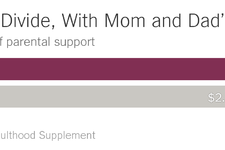 Graphic | The Urban-Rural Divide, With Mom and Dad’s Money

There are also significant differences for young people who live in bigger cities. Young people in metro areas with a million or more people are 30 percent more likely to receive rent money from their parents than those in smaller cities. After controlling for other factors, the big-city residents receive twice as much support.

This helps explain the country’s decline in internal mobility over the past few decades. In the 1980s, 5.1 percent of those 18 to 24 moved across state lines. By the 2000s, that figure had fallen to 3 percent. When the barriers to moving to metro areas with high-paying jobs are too high, it undermines the long-held belief that people can simply uproot themselves for better job opportunities. That may have been true in the past, when low-skilled work paid better and rents were lower, but the survey data suggests that it’s harder to do without a little help.

Financial dependence among 20-somethings has steadily grown in the past few decades. In the 1980s, Mr. Wightman found, fewer than half of this age group received any parental support. But by 2010 nearly 70 percent of them did.

Living expenses account for only 20 percent of the help that parents give their children. According to the survey, the bulk of the support comes in the form of lump-sum gifts for things like a down payment on a house or capital to start a business.

Mr. Wightman said that parental help, “just by being there, influences the decisions that you make, in the major you pick, where you go to college and the type of work that you want to go into.”

This article was informed by a data set known as the P.S.I.D. Transition to Adulthood Supplement. The supplement, run by the Institute of Social Research at the University of Michigan, allowed researchers to learn about the demographics of the parents and ask more detailed questions of the young people about what kind of financial support they received, specifically for living expenses.