LAS VEGAS, Nev. – Western Star Trucks held its ‘Get Tough Challenge’ during the World of Concrete 2017 (WoC) show in Las Vegas last month, awarding prizes to the Top 3 finishers each day, including a pair of Canadian competitors on Day 3.

Ani Todd Smith of Level 6 Marketing said winners of the three-day challenge were determined by the highest score out of 50, and if there was a tie, the fastest time was taken into account.

“The challenge allowed contestants to demonstrate their operating and safety knowledge of Class 8 severe duty trucks, including concrete mixers and dump trucks,” Todd Smith explained. “The challenge featured tasks that often occur on construction sites. They included backing into park stations, parallel parking to a curb, following an S-curve and backing up a ramp made of granular fill.” 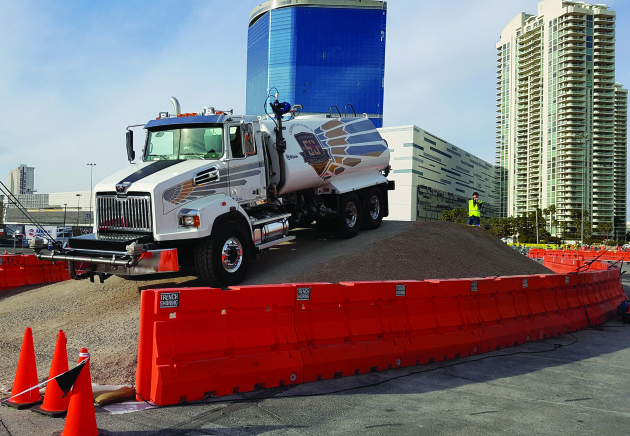 Western Star’s ‘Get Tough Challenge’ happened in Las Vegas at World of Concrete 2017.

WoC said feedback from the show, which ran Jan. 16-20 at the Las Vegas Convention Center, has been positive, resulting in a 73% rebook on booth space for its 2018 show.

“We are very pleased with the results of this 2017 event,” said senior vice-president of Informa Exhibitions US, Construction and Real Estate. “As the construction industry continues with its upward momentum over the past few years, World of Concrete has successfully kept pace, providing the industry with the latest products, technologies, and educational offerings. This once again positions WOC as the event for concrete and masonry professionals.”

“Exhibitors and attendees seemed very pleased with WoC 2017 from the show floor to the educational opportunities,” said WoC director Jackie James. “Although the show was earlier than in past years, the industry showed up in force to see new products, network with their peers and prepare for business in 2017. International attendance was strong with representation from India, Italy, Philippines, Costa Rica, Brazil, China, Japan, South Korea, Chile, Argentina and many other countries.”