For more than a week, the gruesome killing of a young hairstylist in a downtown Chicago luxury high-rise has captivated the region, the case’s surprising twists mystifying even the detectives who eventually tracked down two suspects.

It started with an anonymous phone call late on July 27 to the front desk of the Grand Plaza, a 57-story apartment building near the Chicago River. There had been a crime committed on the 10th floor, the caller said.

The police soon entered Unit 1004 to find blood nearly everywhere and the body of Trenton Cornell-Duranleau, 26, who had been stabbed so violently that the blade broke off the knife used in the attack, the authorities said. Missing were the apartment’s owner, Wyndham Lathem, an assistant professor at Northwestern University, and a British man seen on the building’s surveillance cameras with him, Andrew Warren.

Over the next week, detectives with the Chicago Police Department cast a wide net, eventually involving federal authorities and British law enforcement officials as they tracked the two men’s movements across the western half of the United States. Along the way, developments in the case — a donation in the victim’s name at a Wisconsin library and a remorseful video recorded by Mr. Lathem — puzzled investigators and added to their urgency.

The winding manhunt came to an end late last Friday in Northern California, more than 2,000 miles from Chicago. Mr. Warren, a 56-year-old administrator at Oxford University in England, walked into a police station near Golden Gate Park in San Francisco and said he was wanted for a crime. 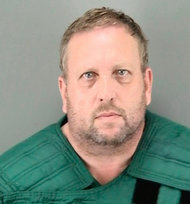 Andrew Warren, an administrator at Oxford University in England, was also arrested.

Across the San Francisco Bay, Mr. Lathem, 42, surrendered to United States marshals outside a federal building in Oakland. At a court hearing on Monday, Mr. Lathem waived extradition. He could be escorted back to Illinois by the Chicago police as early as Tuesday.

His lawyer, Kenneth H. Wine, called Mr. Lathem a “gentle soul” accused of a crime that was “totally contrary” to the person his friends and colleagues knew. At the court hearing, Mr. Lathem, shackled and wearing a red jumpsuit, smiled at supporters who waved and blew kisses, The Associated Press reported. Mr. Wine said his client would plead not guilty to murder charges.

A court hearing for Mr. Warren has not been scheduled. Neither man has been formally charged in the death of Mr. Cornell-Duranleau, with whom, the police said, Mr. Lathem had been in a personal relationship.

Anthony Guglielmi, a spokesman for the Chicago Police Department, said investigators were preparing to interview the men and hoped to learn more about what happened on July 27.

“We have many, many unanswered questions,” Mr. Guglielmi said in an interview on Monday night. “We have ideas about what has taken place and the physical evidence, but we have a little bit more follow-up work to do.”

The detectives’ questions in the case span from England to California. Mr. Warren abruptly left his home in Oxfordshire without telling his partner or his family, who reported him missing. They asked neighbors to look out for him, but Mr. Warren had in fact traveled to the United States for the first time, arriving on July 24 and meeting up with Mr. Lathem in Chicago.

Mr. Guglielmi said it was unclear how Mr. Lathem, a microbiologist at Northwestern who had studied the plague, met Mr. Warren, a senior treasury assistant at Somerville College at Oxford University. Northwestern fired Mr. Lathem on Monday. In a statement last week, Oxford said that Mr. Warren’s “colleagues at Somerville College have now all been informed and are shocked to learn of the case.”

It is also unclear whether Mr. Warren knew Mr. Cornell-Duranleau, who grew up in Michigan and had recently taken a job at a Chicago salon.

But the authorities said there was no doubt all three men were in the 10th-floor apartment around 5 a.m. on July 27 when Mr. Cornell-Duranleau was stabbed repeatedly. Mr. Guglielmi said the attack was so vicious and expansive that the police were still processing the crime scene.

Shortly after the attack, security cameras at the Grand Plaza captured Mr. Warren and Mr. Lathem leaving the building together, Mr. Guglielmi said. Investigators believe they drove that same day to Wisconsin, where a man entered the Lake Geneva Public Library and presented a $1,000 donation in Mr. Cornell-Duranleau’s name.

From there, they made their way west, ignoring phone calls from investigators and from Northwestern University trying to reach Mr. Lathem, the police said. While on the run, according to the police, Mr. Lathem sent a remorseful video to close friends and family, making reference to “the biggest mistake of his life.”

As the search expanded, the Chicago police enlisted the help of the United States Marshals Service. Through an associate of Mr. Lathem’s, marshals made contact with him late last week and worked to get the men to surrender, the authorities said.

They finally did on Friday. Mr. Warren was dropped off outside a San Francisco police station house. A short time later, federal agents spotted Mr. Lathem, exhausted and unshaven, standing outside the Oakland courthouse.

“He looked a little disheveled, like he hadn’t slept much the last couple of days, but at the same time there was a look of relief,” Michael McCloud, a fugitive task force commander with the United States Marshals Service, told The Chicago Tribune. “Relief because of stress, of being on the run for a week.”