WHITECLAY, Neb. — This town is a rural skid row, with only a dozen residents, a street strewn with debris, four ramshackle liquor stores and little else. It seems to exist only to sell beer to people like Tyrell Ringing Shield, a grandmother with silver streaks in her hair.

On a recent morning, she had hitched a ride from her home in South Dakota, just steps across the state line. There, on the Pine Ridge Indian Reservation, alcohol is forbidden. In Whiteclay, though, it reigns supreme.

“You visit, you talk, you laugh, you drink,” said Ms. Ringing Shield, 57, as she stood on the sidewalk with friends, chain-smoked Montclair cigarettes and recounted her struggles with alcoholism, diabetes and cirrhosis. “It makes you forget.” 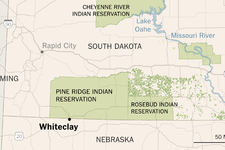 Now many residents of Nebraska and South Dakota are pushing for the liquor stores of Whiteclay to be shut, disgusted by the easy access to alcohol the stores provide to a people who have fought addiction for generations. The Nebraska authorities, in turn, have tightened scrutiny of the stores, which sell millions of cans of beer and malt liquor annually. Last year, for the first time, the state liquor commission ordered the stores’ six owners to reapply for their liquor licenses.

The fate of the stores could be decided next month, when the three-member commission holds hearings in Lincoln, the state capital.

The issue has left people in South Dakota and Nebraska deeply divided. Most agree that alcohol abuse on the reservation is an entrenched problem, but they are unsure of the solution — and who is responsible.

The grim scene in Whiteclay has scarcely changed for decades. Particularly in the warmer months, Native Americans can be seen openly drinking beer in town, often passed out on the ground, disheveled and ill. Many who come to Whiteclay from the reservation spend the night sleeping on mattresses in vacant lots or fields.

Even under the chill of winter, people huddle outside the liquor stores, silver beer cans poking from coat pockets. The street, busy with traffic from customers, is littered with empty bottles and scraps of discarded clothing.

“It promotes so much misery, that little town,” said Andrea Two Bulls, 56, a Native American on Pine Ridge, who added that she hoped the state would revoke the licenses. “My brother used to go to Whiteclay all the time, and we’d have to go look for him. People sit and drink until they pass out. They just succumb.”

Over the decades, there have been frequent protests outside the stores. Lawsuits against the retailers and beer distributors have been filed. Boycotts of brewers that sell to the stores have begun with enthusiasm. All those efforts have sputtered, though, and little has changed.

But the last year has brought a powerful surge of action from advocates, legislators and even the state attorney general that seems to have imperiled the stores for the first time in memory.

This month, Doug Peterson, the Nebraska attorney general, said his office had evidence that the stores had been selling beer after hours and to bootleggers, a violation of state law that could further threaten the stores’ existence.

Though alcohol is illegal on the reservation, it is widely known that beer is easily purchased there — at two or three times the retail price — from the bootleggers who buy it off the reservation.

The Liquor Control Commission has questioned whether Whiteclay’s county, Sheridan, has enough law enforcement to serve the town. If the board decides it does not, that could be sufficient cause to revoke the stores’ licenses, which are set to expire in May.

Native Americans and many Nebraskans have long argued that while the stores may operate legally, they are an eyesore and an embarrassment.

“They’re basically bypassing the laws that alcohol is illegal on the reservation,” said Rosie Freier, the owner of a shop on Pine Ridge that sells Native art and jewelry. “The community of Whiteclay only exists because of the liquor stores, and there is very little law enforcement.”

Racquel Little Thunder, 33, who had stopped in the store to buy clothing, said she blamed the government of Nebraska, which reaps tax revenue from the stores.

“They just see dollars. They don’t care who buys liquor,” she said. “If they had any kind of heart, they wouldn’t sell alcohol so close to the reservation.”

Others argue that the problem of alcohol abuse on the reservation goes well beyond the stores in Whiteclay. Even some Native Americans said they were uneasy over upsetting the status quo.

“If we would get rid of the stores, there would be an uproar,” said Allyssa Comer, 20.

Vance Blacksmith, 47, a Native American and teacher on the reservation, said he favored leaving the stores alone.

“They’re not hurting anyone,” he said. “Drinking is a personal choice. The people who drink are trying to accept life as it is. And it’s depressing, being here on Pine Ridge.”

Pine Ridge, one of the nation’s largest Indian reservations, is a catalog of social ills: Unemployment exceeds 80 percent, poverty affects more than 90 percent of those living on the reservation and alcoholism is rampant. By some estimates, one quarter of children born on the reservation have fetal alcohol syndrome.

Whiteclay is often seen as another somewhat hopeless and entrenched problem. State Senator Patty Pansing Brooks, who has represented Lincoln since 2015, said that when she began trying to whip up support in the Legislature to take action in Whiteclay, she heard a common response: Don’t bother.

“Oh, we’ve looked at this before, there’s nothing you can do,” Ms. Pansing Brooks said she was told. When she went to Sheridan County last year, she said, she heard from residents, “What’s this white woman from Lincoln doing, putting her nose into our business?”

She saw it differently. “We have people lying on the streets, and it would not be allowed in any other part of the state,” she said. “We are selling alcohol to a people who we have known for centuries are particularly vulnerable to alcoholism. We have been living off and getting tax receipts from their hopeless, vulnerable situation.”

State Senator Tom Brewer, who is Native American and grew up near Whiteclay, has come out strongly against the stores.

“If you’re doing something that is so caustic and so wrong, to poison an entire group of people, you have to step back and say, ‘Is this something that we should be allowing, and not do something?’” he said. “No one before has had a burning passion to see it changed.”

Andrew Snyder, a lawyer representing the store owners, blamed political pressure for the scrutiny of the stores.

“What this is is our state government overstepping its bounds because of the political winds,” he said. “They’re getting harassed by the state on all sides.”

If the liquor licenses are revoked, the store owners will appeal, Mr. Snyder said.

Terry Robbins, the sheriff of Sheridan County, has found himself at the center of the fight over Whiteclay. He was in his office in Rushville early on a recent morning, a black cowboy hat overturned on his desk.

He bemoaned all the attention on Whiteclay from protesters, people he described as outsiders who should find something in their own communities to get angry about. He knows they are preparing to make even more of a public fuss when they go to Lincoln in April to attend hearings at the Capitol.

Sheriff Robbins echoed a common sentiment heard from both Nebraskans and Native Americans: If the stores lose their licenses and close down, people in search of beer will just drive farther to get it, endangering themselves and others on the roads. He favors containing the problem in Whiteclay, rather than allowing it to spread out over the county’s nearly 2,500 square miles.

“The people that want to drink are going to drive and get alcohol somewhere,” he said. “What I’m thinking is that it’s going to put more drunk drivers on the country roads.”

A more distant possibility is a buyout. Bruce and Marsha BonFleur, who run a ministry in Whiteclay, said they had been trying to raise money — at least $6 million — so that the store owners would sell and close down for good. The BonFleurs have held meetings with the owners, who Mr. BonFleur said were exhausted from the attention and open to the idea of selling.

“We believe that they want to do the right thing,” he said, sitting in the living room of the couple’s wood-paneled cabin, a short walk from the stores. “They’re ready to get out.”