We’re following major developments in the markets throughout the day. Check below for the latest updates. 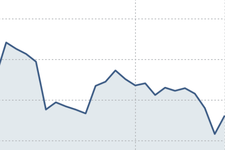 Graphic | What the Markets Are Doing

BlackRock, the world’s largest asset manager, continued to reap the benefits of the passive investing revolution in the first quarter of this year as investors stuck to ditching actively managed mutual funds for cheaper exchange-traded funds that track a variety of indexes. Read more here.

Morgan Stanley said on Wednesday that its profit jumped 74 percent in the first quarter, thanks to higher revenue in its investment banking and fixed-income trading businesses.

Revenue from fixed-income trading and sales at Morgan Stanley nearly doubled to $1.7 billion in the quarter.

The results continue a trend of strong trading of bonds across much of Wall Street at the start of the year (save, perhaps, for Goldman Sachs), helping to push Morgan Stanley shares up more than 2 percent in premarket trading.

Carmakers from around the world converged at the Shanghai auto show on Wednesday, showing off their plans to get a bigger piece of China.

Announcements ranged from alliances — Bosch of Germany plans to work with the Chinese internet giant Baidu and others on autonomous driving — to new products and sales goals.

And Ford, which said this month that it planned to offer a full line of electric or hybrid vehicles by 2025 with the Chinese company Chongqing Changan Automobile, stood by its cautious approach. “You don’t get any prizes for being first to market,” Trevor Worthington, Ford’s vice president for product development in Asia Pacific, told Reuters at the show.

New Strategy from Maker of Dulux

Investors had a muted response to a strategy update on Wednesday from Akzo Nobel, the maker of Dulux paint, as the paint and chemicals company from the Netherlands sought to stave off an unsolicited takeover bid, worth about $24 billion, from the American rival PPG Industries.

Shares were up slightly in early trading in Amsterdam after Akzo Nobel said it planned to return as much as 1.6 billion euros, or about $1.7 billion, to investors through dividends and increased its financial guidance for 2020 as it outlined a plan to remain a stand-alone company.

Akzo Nobel also said it would seek to publicly list or sell its specialty chemicals arm within 12 months.

IBM has been touting Watson, its artificial intelligence technology, as a tool for the health care industry. But investors have taken a look at the company’s performance and the diagnosis is grim.

Shares of IBM are down in premarket trading after the company delivered a disappointing set of quarterly results.

Big Blue has been trying to shift its focus, moving into cloud computing, data analysis and even financial consulting. Watson is part of that — IBM has invested billions of dollars in the A.I. platform. But there are still questions about whether these parts of the business can make up for its legacy hardware and software products, which continue to weigh the company down.