The economy will keep growing just enough to put more Americans back to work, but without overheating to generate excessive inflation. American workers will see gradual pay raises that keep compensation rising faster than inflation. Interest rates will rise gradually, while staying low by historical standards. And that’s all before accounting for any major stimulative policies that may emerge from the Trump administration and Congress.

That was the view of the economy sketched by the Federal Reserve chairwoman, Janet Yellen, at her first news conference of 2017 on Wednesday. In short, the Fed believes that after nearly eight years of trying to nurse the economy back to health, its work is nearly done.

The general sense of rosiness isn’t really anything new — for years, Ms. Yellen and her predecessor, Ben Bernanke, have forecast that the economy will steadily converge toward a Goldilocks-like state of being neither too hot nor too cold.

Two things have changed. First, that day now feels imminent, with the unemployment rate at 4.7 percent and inflation closing on the 2 percent the Fed thinks best. That is a key reason the Fed raised its interest rate target Wednesday. Second, markets now believe the Fed’s message that higher rates are on the way; bond markets suggest that the Fed will actually follow through with its intentions on gradual interest rate rises. You couldn’t say that a year ago.

“The simple message is: The economy is doing well,” Ms. Yellen told reporters.

The overwhelming message was of gradualism — both on the rate of economic improvement and the Fed’s own efforts to wind down its era of low interest rates.

This will, if these plans stay in force, remain the slowest cycle of interest rate increases in modern history. 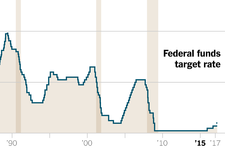 Graphic | Why the Fed Raised Rates for the Third Time The Federal Reserve is raising interest rates for the third time since the financial crisis after being at near zero.

She also displayed little of the fear of setback that has been pervasive at the Fed for years. The central bank has spent the last eight years trying to help the recovery along with a series of monetary interventions; more than any other institution in Washington, it owns the recovery.

That has also meant that the Fed has acted with haste to signs of softening. In the winter of 2016, for example, barely a year ago, the central bank backed off plans for more rate increases after a steep stock market sell-off and a rise of economic pessimism.

After years of persistently undershooting its 2 percent goal for inflation, the Fed explicitly, if subtly, raised the possibility on Wednesday of erring in the other direction. The central bank’s policy committee said it would be monitoring “actual and expected inflation developments relative to its symmetric inflation goal.”

In this context, “symmetric” implies that it aims for 2 percent inflation and would be equally displeased by inflation that was too high or too low. That implies that the Fed is not inclined to overreact to the possibility that inflation could drift slightly — and in the Fed’s view temporarily — above 2 percent in the coming months.

After the announcement, the interest rates on Treasury bonds actually fell. That implies that markets were ready for signals of even more aggressive rate rises.

And the clearest signal that the Fed is in steady-as-she-goes territory was in how Ms. Yellen talked about the possibility of new tax cuts or infrastructure spending that might arrive in the months ahead.

There has been “no reassessment” of those odds, she said. Presumably if that happens, the Fed would indeed raise interest rates more quickly, but Ms. Yellen shows no desire to pre-emptively get ahead of what the rest of the government is doing.

Given the vagueness and uncertainty around those plans, that maintains options for officials at the Fed. If policies along those lines materialize, they can plug them into their models and accelerate the pace of rate increases; if Congress is bogged down in stalemate, they won’t.

It has been a long time coming, and Ms. Yellen went out of her way to avoid mounting a metaphorical “Mission Accomplished” banner. But in the substance of her policies, it is evident that the Fed feels it has mostly accomplished its job.