MISSISSAUGA, Ont. — Unfortunately for residents and motorists who live and work here, the Greater Toronto Area has become notorious for traffic congestion during almost any time of day.

To combat this fact, the city of Mississauga is implementing a new Advanced Transportation Management System (ATMS) that it believes will help traffic flow more seamlessly through the city by using the latest technology available. 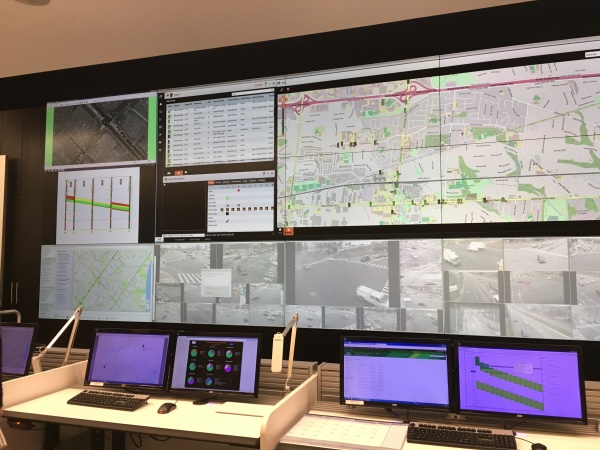 On Feb. 7., the City of Mississauga invited the media to its new Advanced Traffic Management Centre to introduce its new traffic management system.

“In Mississauga, our roadways are near capacity and sometimes at capacity in the a.m. and p.m. peaks,” said Mickey Frost, the director of works operations and maintenance, on why the city needed this system at a press event in Mississauga on Feb.7. “The public has expectations around traffic management. The public expects the city to provide and efficient transportation network to be able to respond to issues and provide timely accurate information.”

Plus, added Frost, the system needed to be replaced as the existing traffic control system had reached the end of its life cycle.

“So the ATMS project provides a means to meet operational needs and the expectations of the public,” he said. “The vision is to move from passive to active management of the traffic system.”

The ATMS is a work in progress and already has its first component completed: the building of the Advanced Traffic Management Centre. The center is the physical hub where staff monitors and responds to changing traffic situations in real time. It features a video wall, where traffic in the city is monitored by live cameras and radars. The new ATMS will make it possible for staff to not just monitor traffic and travel conditions but to influence traffic signals to help assist in traffic flow, representatives stated.

But this isn’t all the city has planned with for the project, explained Frost.

There are four other components that the city is looking to work on including: upgrading traffic signal communications, replacing traffic control systems, implementing intelligent transportation systems such as cameras and looking at future initiatives like adaptive traffic control and traveler information.

And while most aspects of the project are slotted for a later time, some of the components listed above are being implemented today.

“The new ATMS will enable the connection of over 750 traffic intersections of real time data,” said Shawn Slack, director of information technology. “Today we migrated 120 intersections to the networks, and the other 600+ will be on the network by the end of 2018.”

In addition, the city plans on increasing the number of traffic cameras in high profile corridors from 38 to 150 by the end of the project.

“A well designed ATMS will make it possible to monitor travel conditions, influence the operation of traffic signals, disseminate information and interact with other transportation modes and agencies,” Frost said.

Also at the press event was Mayor Bonnie Crombie who showed her support for the new system.

“Like other municipalities, Mississauga too is experiencing higher traffic volumes and road congestion,” she said. “I think (the city) has a role to play and I’m very excited at the implementation of this system.”

The City of Mississauga said it is investing a total of $16.2 million into the project that is set to be completed by 2020.