WASHINGTON — Michael T. Flynn, President Trump’s former national security adviser, was paid over $65,000 by companies linked to Russia in 2015, according to a letter released on Thursday by congressional investigators.

Among the companies was a cargo airline implicated in a bribery scheme involving Russian officials at the United Nations, an American branch of a cybersecurity firm believed to have ties to Russia’s intelligence services, and RT, the Russian government’s English language television channel, according to the letter, which was sent to Mr. Trump on Thursday by Representative Elijah E. Cummings, a Maryland Democrat. Mr. Cummings is the ranking member of the House Oversight and Government Reform Committee.

The document provides new details about Mr. Flynn’s ties to Russian entities just over a month after being forced to resign following revelations that he had misled Vice President Mike Pence and other top White House officials about his conversations last year with the Russian ambassador to the United States.

The fees were apparently for speaking engagements by Mr. Flynn, a retired Army lieutenant general and former head of the Defense Intelligence Agency. The engagements occurred before he became an official adviser to Mr. Trump’s presidential campaign.

The letter and supporting documents provide new details about a trip Mr. Flynn took to Moscow in December 2015 on behalf of RT. As part of that trip, RT paid him more than $45,000 to deliver a speech at an opulent gala hosted by the network, where he sat next to the Russian president, Vladimir V. Putin. 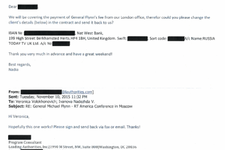 Document | Oversight Committee Releases Documents on Flynn’s Trip to Russia The House Committee on Oversight and Government Reform released a set of documents on Thursday that revealed new details about a trip Michael Flynn took in December 2015 on behalf of RT, a Russian television network with close ties to the Kremlin.

That summer, according to an invoice included with the letters, Mr. Flynn also received $11,250 from a Russian cargo airline named Volga-Dnepr Airlines.

In October 2015, Mr. Flynn was paid another $11,250 by the firm, Kaspersky Government Security Solutions, which was founded by Eugene Kaspersky. Mr. Kaspersky’s Moscow-based Kaspersky Lab has long been suspected of having ties to Russian intelligence services. He studied cryptography at a high school run by the K.G.B. and Soviet Defense Ministry, and later worked for the Russian military.

Mr. Kaspersky founded the lab with his wife in their Moscow apartment in 1997, and since then, it has grown into one of the most well-known and respected cybersecurity firms in the world. That prominence would make interactions with Russian intelligence unavoidable, although no concrete evidence has yet to surface showing any formal cooperation, experts and current and former American officials said.

Kaspersky Lab said in a statement that Mr. Flynn was paid a fee for remarks he delivered at a 2015 cybersecurity forum in Washington.

“As a private company, Kaspersky Lab has no ties to any government, but the company is proud to collaborate with the authorities of many countries, as well as international law enforcement agencies in the fight against cybercrime,” the statement said.

Phone messages and emails to Mr. Flynn and his lawyer were not immediately returned on Thursday.

The information about the money Mr. Flynn received for his 2015 trip is just the latest controversy for the retired general, who was one of the president’s earliest supporters. Last week, Mr. Flynn filed papers acknowledging that he worked as a foreign agent last year representing the Turkish government.

Mr. Flynn had registered as a lobbyist last year but did not file papers with the Justice Department registering as a foreign agent.