Live Briefing: More Rain and Rescues as Harvey Lashes Texas for Another Day

• More than 450,000 people are likely to seek federal aid in recovering from Harvey, the hurricane that tore across the Gulf Coast of Texas over the weekend, Brock Long, the director of the Federal Emergency Management Agency, said on Monday. The agency has said that about 30,000 people will seek emergency shelter, and that federal aid will be needed for years.

• At least five deaths and more than a dozen injuries have been reported in the aftermath of the powerful system, by now a tropical storm.

• More than 30 inches of rain have pounded parts of the Houston area since Thursday, causing catastrophic floods, the National Weather Service reported on Monday. Torrential rains will continue through Friday, with an additional 15 to 25 inches pummeling the region, the Weather Service predicted.

• After making landfall on Friday, Harvey turned back out to sea on Monday morning, with the center of the storm reaching the Gulf of Mexico between Corpus Christi and Houston, the National Hurricane Center reported. It was expected to continue churning to the northeast, along the Gulf coast.

• Are you in an affected area? If you are safe, and are able to, please share your photos and videos with us.

Houston mayor defends decision not to order an evacuation

As Tropical Storm Harvey continued to unleash torrential rains and cause catastrophic flooding in Houston, the city’s mayor, Sylvester Turner, on Sunday forcefully defended the decision not to order an evacuation.

Mr. Turner, who decided with the Harris County judge, Ed Emmett, not to order an evacuation, said such an order would have been chaotic and put more people’s lives in danger.

“The best course of action for the City of Houston and Harris County were for people to stay in place,” Mr. Turner said at a news conference on Sunday night.

Tropical Storm Harvey, which came ashore on Friday and first pummeled areas south of Houston, rolled into Harris County over the weekend and dropped more than two feet of rain in parts of the county. Streets and highways became impassable and rising waters forced residents to flee to higher ground, including to their roofs, to wait to be rescued.

The mayor said it would have been impossible for local officials to draft a safe evacuation plan for the more than six million people in the county when it was unclear where the storm was headed. He said some who did leave Houston before Harvey arrived ran out of gasoline and spent upward of 12 hours in their cars traveling to Austin, which is a three-hour trip under normal conditions.

A couple recount wading to a neighbor’s home with their baby.

Kelli Lilienstern, who lives in central Houston with her husband and their 8-month-old daughter, had “one of the scariest experiences” of her life, she said.

She woke at 5:30 a.m. on Sunday to find floodwaters approaching the door of their one-story home. About 30 minutes later, it was coming inside, first just enough to cover their feet, then rising to their knees.

She strapped their daughter, Penelope, into a carrier close to her chest and they headed out, wading through waist-deep water to the home of a neighbor, someone they had never met before.

She saw large patches of fire ants floating on the surface, and worried about what else might be in the water: “All sorts of rodents,” snakes and even alligators have been spotted in the floodwaters, Ms. Lilienstern said.

The neighbor who took them in, whose home had not flooded, welcomed two other families as well, including one with a 6-month-old. On Sunday, water was lapping at the front steps — and more rain was expected.

“Unless someone comes to get us by boat, there’s no leaving,” Ms. Lilienstern said.

She and her husband managed to bring their dog, approximately 50 diapers and about two weeks’ worth of infant formula for Penelope, among other essentials. 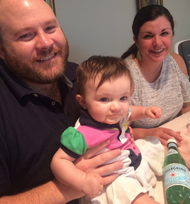 Carl Hennagir, Kelli Lilienstern and their daughter, Penelope, in a photograph taken on Aug. 5.

“We have what’s important,” she said. “I’m just so thankful. A situation like this can bring out the best or the worst in people, and I’m just really grateful that I found the best in people today.”

The oil and gas industries are facing disruptions.

The storm blew through critical areas for the country’s oil and gas industry and has already caused some disruptions in production. Exxon Mobil, for instance, said on its website Sunday that it was shutting down operations at its huge Baytown refining and petrochemical complex because of flooding, and heavy rain prompted Royal Dutch Shell to close a large refining facility in Deer Park, east of Houston.

Shell, one of the largest producers in the Gulf of Mexico, also said it had closed two offshore production platforms, Perdido and Enchilada Salsa, and evacuated most of the workers.

Still, most oil and gas production in the gulf continues uninterrupted, and analysts say it is likely that the effects on energy prices and supplies will be limited by the substantial stocks of oil available, as well as products like gasoline that are on hand because of a long period of booming global output.

“The stocks are high,” said Michael Lynch, president of Strategic Energy and Economic Research, a consulting firm. “Rain damage is probably not that severe.”

He added that the storm was likely to produce “a price blip, mainly in the Gulf Coast area.”

There are signs that companies may be able to restart suspended operations relatively quickly. Valero, a large independent refiner, said in a statement Sunday that the company had assessed the two Texas facilities it had shut down and found that they did not have “substantial refinery impacts from the storm.”

Valero said it was working with government agencies and business partners to evaluate the condition of infrastructure, particularly ports, needed to resume operations. — STANLEY REED in New York 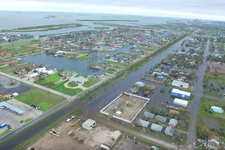 Here are some ways to help.

Donations to the Red Cross for those affected by Harvey can be made online or text HARVEY to 90999.

Donations to the Salvation Army can be made online.

Catholic Charities is accepting donations online or text CCUSADISASTER to 71777 to donate.

Airbnb is waiving all service fees for those affected by the disaster and checking in between Aug. 23 and Sept. 1.