Life can throw some curveballs

WINNIPEG, Man. — Thrust to the helm of his father’s trucking company at the fledgling age of 24, Jason Dubois had to manage a burgeoning business while at the same time coping with the unexpected loss of his dad.

Len Dubois acquired his own running rights in 1986, hauling dry van freight for what is now Norampac Inc. and soon after launched his own company, Len Dubois Trucking.

But in 1998, just as his son Jason had become an owner-operator, Len passed away unexpectedly, and instead of learning the business gradually, Jason found himself running a company of 10 trucks, a dispatcher, mechanic, and bookkeeper. 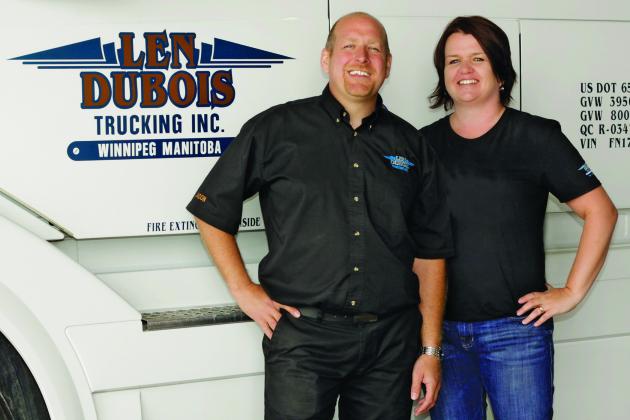 Jason Dubois and his wife Janet may have had to take over the family business earlier than they thought, but they have made it work nevertheless.

“I was tossed into the deep end and forced to keep my head above water,” Jason said. “I learned a lot, both through my successes and my failures.”

Jason said he has been around trucks from the age of 12, going in on weekends and helping his father wash and grease trucks, even drive them around the yard.

Graduating from high school at the age of 18, Jason immediately acquired his Class 1 licence and drove for about four years before becoming an owner-operator.

“So I knew the trucking side,” Jason said of his impending shift to spearhead Len Dubois Trucking. “I didn’t know the business side. I really relied on the people around us, like the dispatcher, the bookkeeper, and a few key people who really helped me.”

One of the key pieces of advice Jason remembers receiving during that transition time was to avoid making any rash decisions.

“If you can’t tell somebody, ‘Give me 10 minutes or a day think about it,’ then don’t make that call, and that really resonated with me, so I kind of used that over the years.”

Jason admits it was a very trying time when his father passed, as they had just purchased the terminal building where the company is currently located, which was more than they needed at the time.

“There was a lot of risk when my dad bought it, and then he passed away basically six months later,” Jason said. “There was some concern there that we might not make it through, but you just have to work hard every day.”

And that hard work has certainly paid off.

Today, the company operates a fleet of more than 55 power units with both company drivers and owner-operators, with more than 110 trailers, including dry van, heated, open deck and curtainside trailers servicing all of North America.

In 2011, Dubois Global Logistics was also created to better serve its customers by expanding its service offerings to include dedicated logistics, intermodal, ocean, and air transportation services.

All of this success has led to the company exceeding the facility it once had room to stretch and grow, and plans to accommodate that growth are underway.

“We will continue to strive for profitable growth at a steady pace,” Jason said. “And we will continue to focus on what we do best – offer quality service for our customers and develop nurtured relationships with our clients and staff.”

But like many western Canadian companies, 2016 proved to be a challenging year for Len Dubois Trucking, particularly with the impact of the dollar on rates, the cost of equipment, and freight volumes.

“Our dispatchers worked very hard to keep the same level of utilization we have seen over the last couple of years,” Jason said. “Our drivers had to continue to provide great, professional, on-time service to make sure our customers did not have a reason to look elsewhere.”

Despite the cost of a truck increasing by about $30,000, the company continued to upgrade its equipment, invest in software and technology, both in its office and trucks, which Jason said helped drive efficiency and reduce costs.

The current year brings with it increased optimism for Jason, from a business perspective.

“We have nurtured and continue to grow relationships with our customers and have amassed a great group of people that are passionate and care about their jobs both in the office and in the trucks,” he said. “We will begin to see some of the efficiencies we have put into place translate into cost savings for us and our customers.”

The company is also on top of the US’s electronic logging device (ELD) mandate, and Canada’s impending effort to follow suit, with every vehicle fully upgraded and a focus on training staff leading up to implementation.

Jason’s outlook is not as rosy for the industry as a whole.

“We are going to have a tough year ahead,” he said. “The continued sluggish economy combined with the added costs of a carbon tax and the costs involved with preparing for the ELD mandate are going to take a toll on many companies.”

Being part of its community is another effort that tops the list for Len Dubois Trucking.

The company support an array of events and charities in and around Winnipeg, including the World’s Largest Truck Convoy, Ride for Dad, STARS Rescue on the Island the Winnipeg Children’s Museum, the Santa Claus Parade, as well as sponsoring a handful of youth hockey teams and tournaments, to name a few.

“Not all of our drivers live in Winnipeg, and their commitments stretch beyond the perimeter into the rural areas of the province,” Jason said. “A trucker’s home time is limited, and to see them out there, working to better their community or raise funds for their preferred charity, is pretty amazing.”

It’s safe to say that Len Dubois would be proud of the company he created and his son has continued to nurture.

“It’s been 19 years since my father passed away,” Jason said, “and we’ve grown a lot since then and continue to grow every year.”