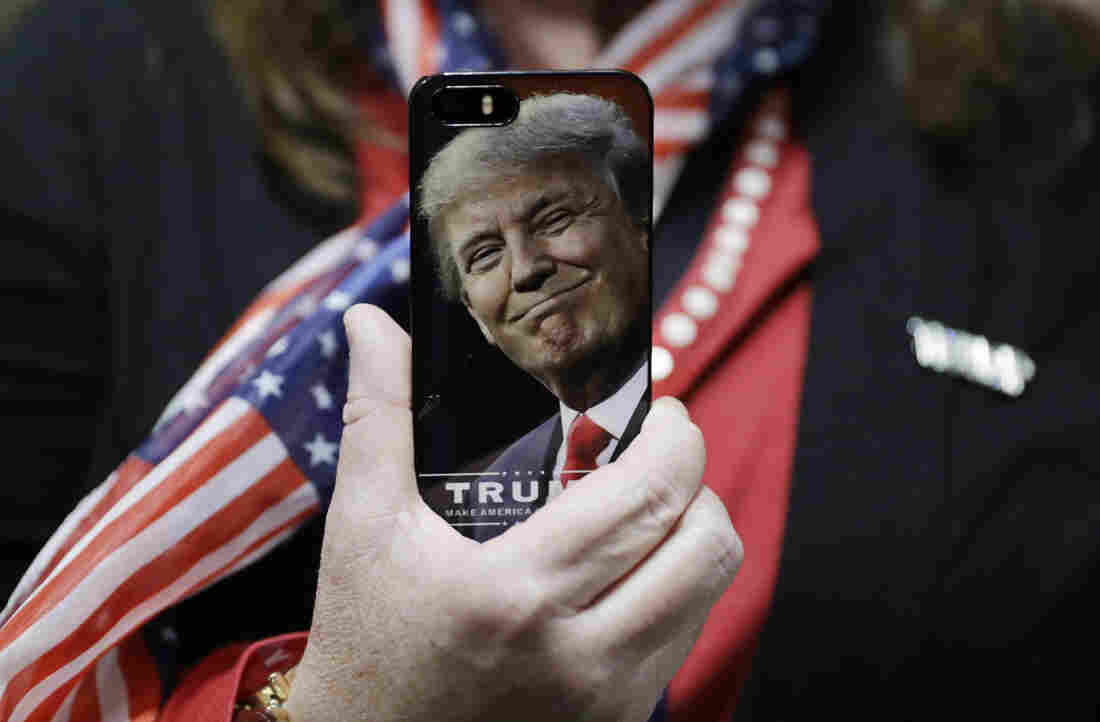 A woman holds up her cellphone before a rally with then presidential candidate Donald Trump in Bedford, N.H., in September. John Locher/AP hide caption

During his campaign and now as president, Donald Trump has made Twitter part of the daily news cycle, with a single early-morning or late-night Trump tweet setting the news agenda for hours, if not days.

But Trump’s use of Twitter hasn’t really helped the company’s bottom line, or drastically increased user numbers. That might be in large part because you can find out what President Trump is tweeting without having to actually be on Twitter. If you just wait long enough, cable news channels, other social media platforms like Facebook, and even news organizations like the one you’re reading now, will tell you everything Trump has tweeted.

But Debra Williamson, an analyst with eMarketer, says this kind of problem is not new for Twitter. “For as long as Twitter’s been in existence, it’s had far more popular awareness than it’s had actual users,” she says. “Everybody knows what Twitter is. But not that many people use Twitter. And they’ve been fighting that perception, which has turned mostly into a reality over the past few years.”

There’s another problem facing Twitter that might be more closely tied to Trump: abuse and harassment on the platform. Many advertisers are reluctant to run ads on a space that is full of some very nasty and politically charged discourse.

“When you think about advertisers, they want to be in a nice, well-lit, pleasant place,” Williamson says. “And if the commentary on Twitter is negative or abusive, then that just gives advertisers a very easy reason to not want to advertise there.”

And this problem has also kept companies like Disney from buying Twitter, according to Bloomberg. You could make the case very easily that Trump has contributed at least a bit to that kind of environment.

“It’s my view that having Trump on the platform [Twitter], tweeting as he is, would probably be an incremental negative,” says Richard Kramer, a senior analyst at Arete, an equity research firm. “It’s fitting a long-term pattern on Twitter, in that the content of the platform often strays into abusive language, and is not what you would call in the advertising community, ‘brand safe.’ “

Last week, Twitter announced some changes to fight harassment on the platform. The company said it would take more steps to keep people who have been singled out for harassing before from making new accounts. Twitter also said it will make its searches, “safer” and take out sensitive content, as well as hiding tweets Twitter has deemed abusive or “low quality.”

But several experts who spoke with NPR said to really stop harassment, Twitter needs to authenticate every user — make them say who they are and show their faces and their names.

The question facing Twitter now is how to thrive in its current environment — one dominated by Trump, who is in almost equal parts a source of opportunity and strife for the social media platform.

Michael Pachter, a research analyst with Wedbush Securities, thinks Twitter should lean into Trump, and use him to its advantage. “They should cast themselves as a news organization without reporters,” Pachter told NPR. “Trump is making news by posting on Twitter.”

That strategy of bringing new users to Twitter, by emphasizing that users can see the news happen in real-time and framing Twitter as a news service might not be the most profitable. Lots of newsrooms throughout the world don’t turn a profit at all.

But Pachter also says the company should do a better job of monetizing Trump’s already solid base of followers on the platform, whether or not the company can bring in many more new users. “He [Trump] has 24 million followers,” Pachter said. “Imagine advertising to them.”