The order makes no immediate changes to work visa programs but tells the Departments of Labor, Justice, Homeland Security and State to study existing laws and procedures and recommend changes.

In the case of one program, H-1B temporary visas, the order directs the agencies to suggest changes to help ensure that the visas are awarded to the most skilled, best-paid immigrant workers. “Right now, H-1B visas are awarded in a totally random lottery, and that’s wrong,” Mr. Trump said at the signing in Kenosha, Wis.

The order also calls for a crackdown on fraud and abuse in the current system of work visas — which the agencies had already signaled they would do.

What is the H-1B program, and why is the president focused on it?

The H-1B program grants 65,000 work visas a year to foreigners, with 20,000 more visas granted to foreigners with advanced degrees and an unlimited number of extra visas available for universities, teaching hospitals and other nonprofit organizations. The program is aimed at highly skilled workers, and most of the visas are awarded to technology companies, although other specialty industries such as fashion also use the visas. (Melania Trump, the first lady, worked as a model on an H-1B visa.)

Under federal law, employers that use a large number of H-1B workers are supposed to document that they tried to hire Americans for the jobs. All H-1B employers are also required to pay prevailing wages to the immigrant workers who receive the visas.

Labor Department data shows that about 40 percent of the visas go to entry-level workers and another 40 percent go to people with limited experience and skills. The Trump administration says that more of the jobs performed by those people could and should be filled by Americans.

How are the visas allocated?

Because there are more applicants than visas, the visas are awarded by lottery. Each visa is good for three years and can be renewed for three more years. Immigrants who are applying for a permanent residency visa, known as a green card, can typically stay longer while waiting for approval. 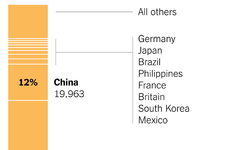 Graphic | Most H-1B Workers Come From India and China

In 2015, President Obama expanded the program to allow the spouses of H-1B visa holders to also work in the United States, but in a recent court filing, the Trump administration said it was reviewing that policy.

It is not clear exactly how many foreigners are in the United States on H-1B visas, but analysts estimate 650,000 to 900,000. In recent years, about 70 percent of the visas have been issued to citizens of India.

Who employs these H-1B visa holders?

The biggest employers are India-based outsourcing companies like Wipro Technologies, Infosys, Tech Mahindra and Tata Consultancy Services. These firms contract with banks, health care companies and other businesses to handle various computing tasks and bring in thousands of immigrants to do the work. Outsourcing companies based in the United States, particularly IBM and Cognizant, also use large numbers of H-1B workers. 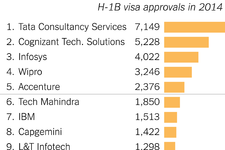 The leading American technology companies, including Google, Microsoft and Apple, employ thousands of H-1B workers. Two companies, Facebook and the chip maker Qualcomm, are heavily dependent on H-1B visas, with at least 15 percent of their American workforces holding the visas, according to federal filings. Thousands of Silicon Valley start-ups also hire some H-1B workers.

How do these foreign workers contribute to the American economy?

American technology companies argue that there is a shortage of qualified Americans for scientific and programming jobs, forcing them to turn overseas for workers to meet their hiring needs.

In addition, immigrants or their children have played key roles in founding many technology companies, including giants like Apple, Google and Intel and up-and-comers like WhatsApp and Airbnb. 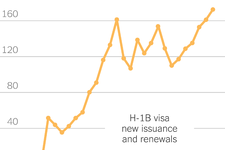 The Indian outsourcers, which generally pay lower wages and operate in a different part of the technology ecosystem, say they are helping American companies cut spending on certain basic services so they can keep employing higher-paid workers in other parts of their businesses. R. Chandrashekhar, the president of the National Association of Software and Services Companies, a group that represents the Indian technology industry, says that more than three-quarters of the Fortune 500, America’s largest companies by sales, use the Indian outsourcers for some operations.

Still, Indian outsourcing companies are preparing for a world of fewer visas, shifting the work to people in India and other countries.

Some studies suggest that universities grant technology degrees to more than enough American students to fill all the open jobs in the United States, so critics of the visas say the program is unnecessary. Silicon Valley companies often do not cast a wide net for American job candidates. Instead, they compete to hire the same graduates of the top colleges for many jobs and rely heavily on immigrants to fill out their workforces.

Under the H-1B program, “all companies have to attest that they tried to find an American,” said Russ Harrison, director of government relations at IEEE-USA, the American branch of IEEE, the largest professional association for computer scientists and electrical engineers. “But all you have to do is check a box.”

In some cases — at Walt Disney and at the University of California, San Francisco, for instance — employers laid off workers and replaced them with cheaper immigrants employed by outsourcing companies.

Foreign workers can also be abused by the visa programs. The H-1B visa is tied to a specific employer, which means the visa holder cannot easily change jobs. Representative Zoe Lofgren, Democrat of California, who has long pushed for changes, said some H-1B holders earned less than their stated salaries because they were forced to repay their employer for various expenses, such as travel.

What changes are under consideration for visa programs?

The Trump administration was vague about what it would like to change. In a background briefing with reporters, officials said they were considering changing the wage levels that would qualify for visas, raising fees for H-1B applications and steering more visas to immigrants with advanced degrees.

The government will also publicly release more data about other visa programs, such as the L-1, which allows workers officially employed overseas by a company to work in the United States. “We don’t know how many L-1s are here, who employs them, where they are located and what they are paid,” said Ronil Hira, an associate professor of political science at Howard University who has extensively studied immigrant visa programs.

Many in Congress support changing the H-1B lottery system to give preference to the highest-paying jobs. “We should allocate visas based on who wants to pay the highest salary to avoid undercutting the wages of American workers,” said Ms. Lofgren, who has sponsored one of several bills on the topic.

Such a change would favor established American technology companies, which tend to pay high wages, and hurt the outsourcing companies, which hire immigrants to do more basic work at lower wages. But there is a risk of collateral damage to start-ups, which pay less in cash but award stock to new hires, and to hospitals, which recruit immigrants for nursing and other nontech jobs.

Changes to work visas could also be wrapped into a broader immigration bill. Mr. Trump recently told members of Congress that he was open to discussing that approach.