How to Raise Sensitive Issues During a Virtual Meeting

You can pretty much measure the health of a team, relationship, or even an entire organization by measuring the average lag time between identifying and discussing problems — especially a virtual team. The longer issues go unaddressed, the higher the price you pay in trust, engagement, decision making, productivity, quality, safety, diversity – you name it. In typical organizations, 72% fail to speak up when a peer doesn’t pull their weight and 57% let peers slide when they skirted important workplace processes. To shrink the lag time between the emergence and addressing of concerns in virtual teams you need to create safety. When people feel safe, they open up. When they don’t, they shut down. People only feel safe enough to venture into dicey dialogue when those around them generate sufficient positive evidence of their intentions and respect. To create better candor in virtual meetings try tactics like demonstrating trustworthiness, asking for permission to raise sensitive issues, and confirming facts as you go. 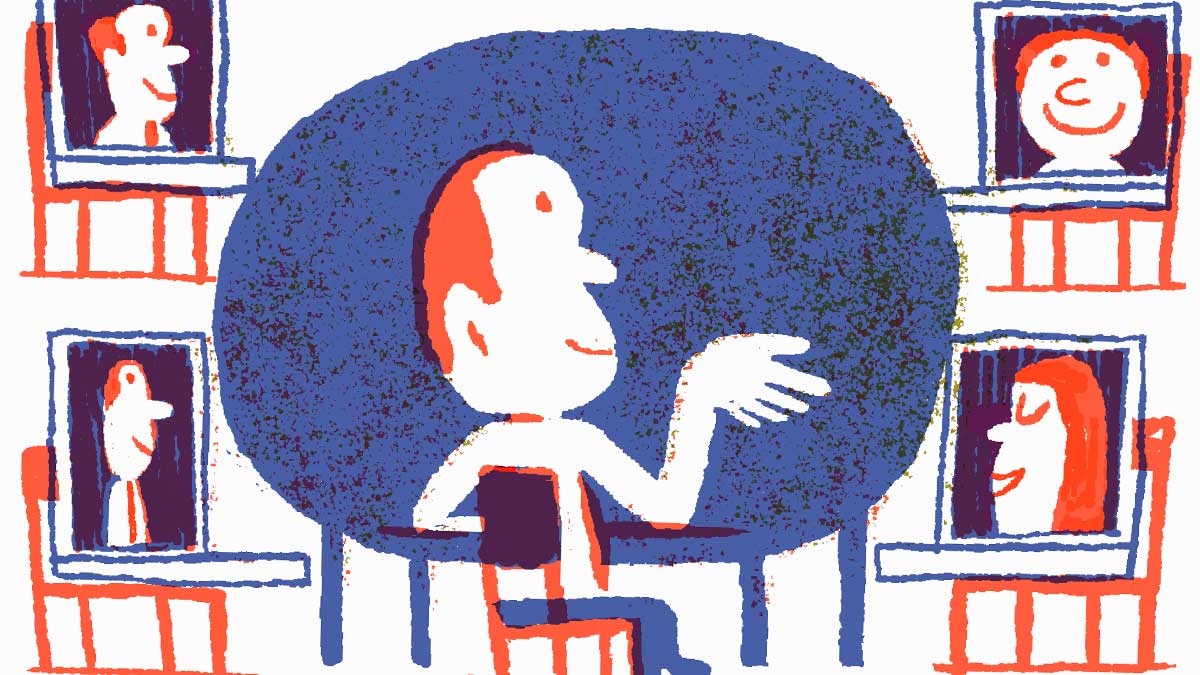 Hassan jammed a pencil eraser into his palm over and over to deal with his frustration.

He was 80 minutes into a virtual meeting with counterparts from five other countries. A financial downturn had cut their revenue outlook dramatically. Those on the call had been tasked with taking 15% out of their cost structure, to help the company survive the impending revenue famine. On last month’s videoconference, all six of them had committed to terminating consulting contracts as one immediate measure. But a few days later Hassan learned that his Indonesian colleague, who was in the virtual meeting, had violated the commitment by extending a three-year engagement on a pet project. Hassan knew that at least three other colleagues on the call were aware of the broken commitment. But no one was saying anything.

In fact, the meeting leader said, “Looks like we’ve covered everything on the agenda. Any other issues anyone wants to address?”

Three decades of researching human behavior has taught me that you can generally measure the health of a team, relationship, or even an entire organization by measuring the average lag time between identifying problems and discussing them. The longer issues go unaddressed, the higher the price you pay in trust, engagement, decision making, productivity, quality, safety, diversity — you name it.

And yet my company’s research shows that, in typical organizations, 72% of people fail to speak up when a peer doesn’t pull their weight and 57% let peers slide when they’ve skirted important workplace processes. People bite their tongue for weeks, months, and sometimes forever. Meanwhile, bad decisions get made, customers are hurt, bad behavior goes unchecked, and employee cynicism festers.

For example, we found that virtual teammates are 2.5 times more likely to perceive mistrust, incompetence, broken commitments, and bad decision making with distant colleagues than those who are co-located. Worse, they report taking five to 10 times longer to address their concerns.

This growing malady will increasingly drag organizational performance down unless leaders develop competence and norms in their organizations to address even the most sensitive issues quickly and directly — sometimes even in the middle of a virtual meeting.

You and Your Team Series

The reason so few of us speak up about sensitive issues is that we are wired for mistrust. More humans survived over the millennia by assuming ill intent on the part of others than the opposite. As a result, we have a conservative bias: When in doubt, play it safe. Hide in a bush. Pick up a rock. Keep silent.

To shrink the lag time between the emergence and the addressing of concerns in virtual teams, you need to create safety. When people feel safe, they open up. When they don’t, they shut down. People only feel safe enough to venture into dicey dialogue when those around them generate sufficient positive evidence of their intentions and respect.

Here’s how to create candor in virtual meetings when it matters most.

Demonstrate trustworthiness. The reason virtual teams are breeding grounds of mistrust is that a lack of physical contact starves us of data about where we stand in the group. When you’re on a virtual team, you should assume that you’ll need to address something difficult as the project progresses — and proactively generate evidence of your trustworthiness in advance of the concerns. Even the smallest of gestures can fill the void of information that distance creates. Be generous with information. Be the first to offer help. Send a congratulatory email when others succeed. A little kindness goes a long way in helping others interpret your intentions differently when inevitable stresses arise.

Ask for permission. When it comes time to raise an issue in a virtual meeting, ask for permission. For example, Hassan could begin with, “Yes, I’ve got an issue to address. It’s pretty sensitive, but pretty important. May I proceed?” Asking for permission may seem perfunctory, but it is psychologically significant. Nothing violates safety like surprise. Giving people an opportunity to opt out gives them a feeling of control. Signal your positive intentions and respect by giving advance warning. If you can deliver this request in a calm, open manner, your tone of voice will reinforce your words.

Share what you don’t want. When you’re worried about others misunderstanding your intentions, inoculate them against their misinterpretation by calling it out. For example, Hassan could say, “Hinata, I’ve got a rumor I want to address that pertains to you. I don’t want to put you on the spot or disrespect you in any way. But I also want to be loyal to the mission we’ve been given, and I believe you do, too. This is an integrity issue to me — that is where I’m coming from.”

Tell the story slowly, facts first. Lay out the factual basis for your concerns. Strip out any accusatory language. Pause to confirm your facts as you go. Tone of voice is everything. Don’t accuse or attack; simply state what you think is correct. For example, say, “At our last meeting, we agreed to cancel consulting contracts. Was that your understanding, Hinata? As I contacted our supply chain consultant to cancel our Malaysia engagement, he informed me that the day before, you had not canceled the contract with him, but rather had extended it for three years.”

Share tentative conclusion and invite dialogue. Next, share what you’ve concluded from these facts, but do so in a way that leaves room for discussion. “That seems to contradict our agreement. Am I missing something here? Did you do this, or is there more to the story?”

Generate follow-up evidence of your goodwill. Once the issue is addressed and settled, reconfirm your intentions and respect through your subsequent behavior. As appropriate, send an email to reconfirm any assurances you gave — without apologizing for any grievances you may have expressed.

These suggestions don’t guarantee that a virtual conversation will go well, but they significantly increase the likelihood. And take heart, because even if a first attempt is rocky, you can generate more safety with how you act following the conversation. The only way to help a virtual team develop the norm of holding crucial conversations promptly is to hold them, even if they don’t go well at first.

In the end, Hassan said nothing. Instead, he used Hinata’s apparent transgression as an excuse to continue his work with his own consultants. This, of course, was not good for the team or the company. The beginning of trouble in virtual teams almost always begins when members choose to act out rather than talk out their concerns.