How ‘Consumer Relief’ After Mortgage Crisis Can Enrich Big Banks

In every multibillion dollar settlement with a big bank that peddled faulty mortgage securities, a major provision has been a requirement that the bank provide “consumer relief.”

In the case of JPMorgan Chase, for instance, the nation’s largest bank satisfied its requirement to provide $4 billion in consumer relief in September by modifying and restructuring mortgages for about 169,000 borrowers — many of them the bank’s own customers.

Goldman Sachs, which is not in the business of making home loans, is seeking to meet its obligation to provide $1.8 billion in consumer relief by buying up tens of thousands of distressed mortgages at discounted prices from Fannie Mae, the government-sponsored mortgage firm, and then hiring outside firms to rework them.

Then there is Deutsche Bank, one of the last of the global banks to settle with federal and state authorities in the United States. The bank, which agreed in January to pay a $3.1 billion civil fine and provide about $4.1 billion in consumer relief, is in a predicament similar to Goldman’s because it does not originate mortgages.

The German bank, like Goldman, has the option of going out and buying distressed mortgages from Fannie Mae or the Department of Housing and Urban Development and then either slashing the total amount of debt owed or reducing monthly payments for borrowers.

But Deutsche Bank negotiated another path to meeting its consumer relief obligation: In some instances, the bank can get credit for lending money to other firms — even hedge funds and private equity firms — that already are in the business of buying soured mortgages with an eye toward revamping them.

One criticism of consumer relief settlements — especially those involving Goldman and Deutsche Bank that effectively empower them to buy mortgages or provide loans to other firms — is that they come with a profit incentive.

Ira Rheingold, executive director of National Association of Consumer Advocates, said the consumer relief requirements in the mortgage settlements were, in essence, creating public policy through enforcement measures. And that, he said, is an imperfect solution.

“Do I love this is the way we are now making public policy that Goldman and Deutsche will be able to comply with consent orders for wrongful behavior and then engage in practices that may make them money?” Mr. Rheingold said. “It doesn’t feel great.”

But, he acknowledged, “there is some real social utility to it.”

Still, Deutsche Bank faces a hurdle in finding takers among hedge fund and private equity firms because those firms might be required to provide documentation of their efforts.

In all settlements, a decision to award a bank credit for providing consumer relief to a borrower is determined by an independent monitor. Deutsche Bank’s monitor is Michael J. Bresnick, a partner with the law firm Venable in Washington who is a former federal prosecutor. Settlement monitors, who issue periodic progress reports, have a good deal of latitude in determining whether a bank is in compliance with the terms of the consumer relief provisions.

The rub could come if Mr. Bresnick asks a hedge fund or private equity firm to provide him documentation of its efforts in working with borrowers, which could be a deal-breaker given the penchant for secrecy among the billionaire money managers who run these loosely regulated firms.

Deutsche Bank could still make it attractive enough for hedge funds and private equity firms by providing dirt-cheap financing. For now, it is hard to know because the bank is still in the process of determining exactly how it will comply with the consumer relief portion of its settlement.

Mr. Bresnick is not expected to issue his first progress report until summer.

A Deutsche Bank spokesman declined to comment on its plans for complying with the consumer relief requirement.

No explanation was given in the settlement documents for why Deutsche Bank can get consumer relief credit “for loans that serve as collateral for financing arrangements.” But it may be because the bank is less prepared than, say, Goldman, to do the vetting necessary to scoop up distressed mortgages. 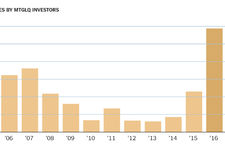 Graphic | Foreclosures by a Goldman Subsidiary

Goldman, which has bought more than 22,000 loans from Fannie Mae since settling with federal authorities in April 2016, had been buying soured mortgages for at least a year.

Bloomberg News reported in January that one firm that Deutsche Bank could lend money to in order to meet its consumer relief obligation would be Lone Star, which operates its own mortgage servicing firm, Caliber Home Loans.

Christina Pretto, a spokeswoman for Lone Star, declined to comment on possible talks with Deutsche Bank, but added that as “a matter of general principle, we are committed to working closely with families to enable them to remain in their homes.”

Over the past two years, Caliber has emerged as one of the nation’s fastest-growing mortgage firms in writing mortgages and in servicing mortgages acquired by Lone Star and by other firms. Caliber’s rise was the subject of an article in The New York Times last year.

Caliber is also one of a handful of firms writing so-called nonprime mortgages: loans to borrowers with spotty credit histories that are nonetheless considered substantially better than the subprime mortgages that helped fuel the financial crisis.

Caliber is facing several investigations into its handling of distressed mortgages after complaints that it often offers borrowers a one-size-fits-all modification that reduces mortgage payments for five years, which then revert to the original amount.

Financing from Deutsche could be important to Lone Star, which until now has largely fueled its mortgage operation with a combination of investor equity, the issuance of bonds backed by nonperforming loans and a $482 million loan from the Canada Pension Plan Investment Board to Caliber.

As for Goldman, it has been buying mortgages through a two-decade old corporate entity called MTGLQ Investors, a reference to mortgage liquidation that describes some of its past activities.

Today, most of the soured mortgages that MTGLQ is buying from Fannie Mae are being outsourced to mortgage servicing firms like Ocwen Loan Servicing, Rushmore Loan Management Services and Shellpoint Mortgage Servicing, which work with borrowers to revamp the mortgages.

In all, Goldman has bought delinquent mortgages with unpaid balances totaling more than $5 billion. Most of those loan pools have been bought at prices ranging from 70 cents to 80 cents on the dollar, according to Fannie Mae.

Eric D. Green, the monitor in the Goldman settlement, said the Wall Street bank had received $113 million in credit to fulfill its consumer benefit requirement. In a report issued in February, Mr. Green, a principal with Resolutions, which settles disputes, and a lecturer at Harvard Law School, said, “Goldman Sachs is off to a good start.”

In an interview on Wednesday, he said that it was not surprising that Goldman “was more active” in buying mortgages since the settlement.

Mr. Green, who also served as the monitor in mortgage settlements with Bank of America and Morgan Stanley, noted that no credit was given for foreclosures.

That said, Goldman, which for now is holding onto the mortgages it buys, is beginning to accumulate foreclosures — an inevitable result of working with borrowers who have not made mortgage payments for many years.

Over the past two years, MTGLQ has taken possession of and resold 731 homes, with most of the sales taking place in 2016, according to RealtyTrac, a foreclosure research firm. Most of the homes resold by the Goldman subsidiary have been in Florida, Illinois and New Jersey.

Those home sales have totaled about $121 million for the firm, RealtyTrac says.