Getting your truck winter-ready

Now that the cold weather and snow has settled in across Canada, drivers and owner-operators should be taking their winter maintenance requirements seriously. To avoid downtime, experts and driving vets will tell you that winterization service is crucial before the freezing temperatures even begin. We spoke with some maintenance experts who provided tips on how to keep your equipment in top shape during the icy winter months so you’re not stuck on the side of the road in the cold this year. 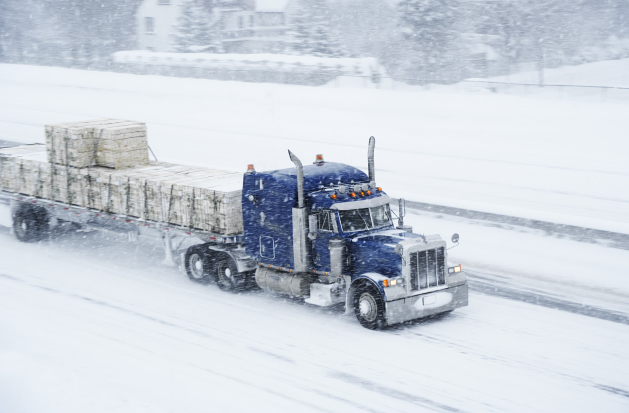 Focus on batteries
The biggest focal point for drivers during the winter months, according to Bert Downton, the regional used truck/trailer sales manager at Custom Truck Sales in Regina, Sask., should be battery maintenance.

“Keeping batteries up and running is crucial for all trucks, especially in the winter. As a driver, you want to make sure they are clean and free from corrosion. I always say that as a truck driver you have to be proactive, not reactive, when it comes to maintaining trucks,” said Downton, who has been in the trucking industry for 38 years and has two decades of experience as a heavy-duty mechanic. “To clean them, you can buy a special battery cleaner, but even more than that, I would suggest charging and testing the battery even before winter sets in fully.”

“Testing batteries is such an easy step for drivers, but it’s often one that is overlooked,” Bhogal said. “You just have to take them to your local shop and ask for a load test. I find batteries are always overlooked because they work fine during the warmer months and drivers think they’ll function fine even if they don’t check them. They think that they don’t have to spend the money on testing the batteries or replacing the batteries, but ignoring them completely ends up costing them more in the long run. I always tell drivers who come in here for winter maintenance to replace old batteries before problems set in.”

Keep air systems in mind
Bhogal said the second most overlooked aspect of winter maintenance is the air system.

“Especially the air dryer,” he said. “You want to make sure it’s functioning properly or change it before the cold temperatures.”

“We used to think that we could get away with changing the air dryer every two or three years, but that’s just not the case anymore,” he said. “And that’s an issue I’ve seen time and time again. So now we have it on our maintenance schedule to change the air dryer cartridge when drivers come in for a safety.”

Experts at Bendix Commercial Vehicle Systems will tell you that proper maintenance of your air system is crucial, because it can affect so many other parts of the truck.

“It’s really not the cold itself that brings the most potential for air system trouble – it’s the moisture that’s brought in with it when the compressor draws in air,” said Richard Nagel, Bendix director of marketing and customer solutions. “If enough moisture makes its way through the air dryer, it creates potential for condensation within the air tanks – and from there, it can travel downstream, affecting the braking system and other technologies.”

Bendix recommends draining air tanks manually every three months to keep the system moisture-free in the winter. It also recommends replacing the air dryer cartridge in the fall well before the cold weather sets in because “the right cartridge can be one of the easiest and most cost-effective means of preventing moisture from getting into your air system.”

Tires
Another thing to keep in mind in the wintertime is tires, explained Carmen Transportation’s Costa.

“Drive tires that are still technically safe at 5/32nds (tread depth) are not helpful in snowy and icy weather,” he explained. “If it was June or August and I had a set of drive tires with 5/32nds, I’d be leaving them on. But I’d definitely be changing them out before the first snow fall. Of course, 5/32nds is completely legal, but we would recommend a customer change them because of the snow and traction you need in the winter months.”

As well, depending on where you travel, it’s good practice to keep tire chains in your rig in case you need them when you least expect it.

Stay stocked
To keep your fluids and winter kit stocked in the cold months seems like a no-brainer, but Costa said that it is an often overlooked maintenance tip.

“Come the fall, we order all of our windshield washer fluid for the whole year,” he said. He said drivers should make sure to use a formula that is meant for extremely cold temperatures.

“We also order our wiper blades, batteries and gloves at that time, too,” he said, emphasizing that drivers should be inspecting wipers often.

It’s also a good idea to keep wiper blades, gloves, water and food in your winter kit. It’ll come in handy if you’re ever stuck, he said.

Heaters
Costa also noted that block heaters need special attention, too. He noted that in particular, the block heater cord should be checked for damage or exposed wires.

“In the summer, fleets take in their cords, so the upkeep of that would have to be checked to make sure there is still power and that a breaker hasn’t tripped,” he said.

“Another tip would be if the fleet is running any type of auxiliary cab heater, that a lot of times, they really have no use in the summer months, so if they’re not checked or run in the summer, they won’t work when they’re needed in the winter,” Costa added. “It doesn’t take much to just run them once in a while in the summer. But if you don’t run them regularly throughout the year, they won’t work as they should when it comes time to use them in the winter.”