WASHINGTON — Asked at a confirmation hearing two weeks ago if he was working with President Trump on a secret plan to replace the Affordable Care Act, Representative Tom Price, Mr. Trump’s nominee for secretary of health and human services, smiled broadly and answered: “It’s true that he said that, yes.”

The committee room, filled with health care lobbyists, consumer advocates and others with a vital stake in the future of the health care law, erupted with knowing laughter at Mr. Price’s careful formulation. For those following the issue closely, it has been an open secret that the fledgling Trump administration is a long way from fulfilling one of Mr. Trump’s most repeated campaign promises.

In a brief aside in an interview with Bill O’Reilly of Fox News broadcast before the Super Bowl on Sunday, Mr. Trump went further than he ever has in acknowledging the reality that any hope of quickly replacing the Affordable Care Act has been dashed.

“Yes, I would like to say by the end of the year, at least the rudiments, but we should have something within the year and the following year,” the president said.

That admission is sure to be a serious disappointment for the president’s most fervent supporters, who sent him to Washington believing that he would move quickly to dispatch the health law.

Soon after he was elected, Mr. Trump reacted to Republican suggestions of a delay in replacing the health act by insisting that repealing and replacing the law must happen at about the same time.

Now, Mr. Trump and his Republican allies on Capitol Hill have recast their ambitions for a rapid-fire repeal, talking privately and publicly about a more deliberative process that could be phased in over weeks or months.

“The political uncertainty surrounding repeal is growing,” said Dan Holler, a spokesman for Heritage Action for America, the advocacy arm of the conservative Heritage Foundation. “If the House has not passed a repeal bill and sent it to the Senate by mid-March,” Mr. Holler added, “that would be serious cause for concern.”

The uncertainty is already reflected in the way Republicans talk about the health care law. Some now talk about “repairing” the law, rather than repealing it entirely. And in a twist of fate, many are facing tough, angry questions at town hall meetings — the mirror image of 2009, when Tea Party activists assailed Democrats who supported the law.

A crowd of protesters gathered outside a town meeting in California held over the weekend by Representative Tom McClintock, who was escorted by police officers as he left the event, according to news reports. Representative Gus Bilirakis of Florida faced 200 angry supporters of the health care law at a meeting on Saturday.

In the interview that aired on Sunday, Mr. Trump appeared to admit that his get-it-done braggadocio about a swift repeal of President Barack Obama’s signature legislation was instead becoming a drawn-out Washington process that could stretch for months or even years.

Mr. Trump’s comment prompted what is becoming a ritual on Capitol Hill: trying to interpret the words of a president who is not steeped in the rhythms of the legislative process.

“I don’t really know what he’s referring to in terms of a year,” said Senator John Cornyn of Texas, the No. 2 Senate Republican. He added that Republicans hoped to get their replacement plan in place “well before that.”

Senator John Thune of South Dakota, the No. 3 Republican in the chamber, said the Senate hoped to work “systematically, in a step-by-step way.” But he conceded “that may take longer than, you know, than people at first thought.” He expressed hope that “at some point,” if Mr. Trump has a health care proposal, “he’ll engage and that we’ll be able to work together with him on it.”

Few of Mr. Trump’s campaign promises rivaled the one he made to dismantle the Affordable Care Act. He repeatedly called it a “disaster” and vowed that, if elected, he would immediately replace it with a new and better overhaul of the health care system.

Mr. Trump issued an executive order on his first day in office directing agencies to do what they could to provide relief from the health care law to people and businesses. But his power to unravel the law unilaterally is limited.

Michael F. Cannon, the director of health policy studies at the libertarian Cato Institute, warned that the delay in taking action in Congress threatened to undermine the momentum for significant change.

“Every day they delay,” he said, “the problems of the Affordable Care Act get worse.”

Insurance executives say immediate action is needed to stabilize insurance markets, or else more insurers will withdraw from the public marketplaces created under the Affordable Care Act. Insurers deciding whether to participate in the market in 2018 face a May deadline for submitting rate proposals to the federal government. 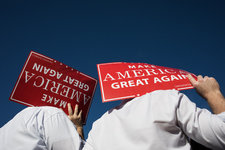 Interactive Feature | Trump Supporters: What Do You Think of the President’s Policies? The New York Times would like to hear from President Trump’s supporters: What do you think about his policies so far?

The turnabout has made Democratic lawmakers gleeful. Their refusal to work with Republicans unless a full-blown repeal is taken off the table has helped to ratchet up pressure on the president and his allies to come up with a replacement before eliminating a health care program that delivers insurance to about 20 million Americans.

“The reality of the difficulty of getting things done is sinking in,” Senator Chuck Schumer of New York, the Democratic leader, said of Mr. Trump and Republicans in Congress. “Democrats are feeling much better that there’s some chance of success.”

Democrats have also been encouraged by opinion polls showing that the public is increasingly supportive of the health care law. A Quinnipiac University poll released last month found that 84 percent of people believe Congress should not repeal the Affordable Care Act until a replacement plan is in place.

That is proving especially difficult for Republicans to accomplish in the time frame that Mr. Trump once called for.

In the first 10 days of the new Congress, lawmakers passed a budget resolution clearing the way to repeal major provisions of the law and neutralize the threat of a Democratic filibuster. By Jan. 27, four congressional committees were supposed to have drafted legislation gutting the 2010 health care law. But it soon became clear that the deadline was neither realistic nor enforceable.

Republican leaders in the House and the Senate now envision a more conventional legislative process. In an interview on Sunday, Speaker Paul D. Ryan insisted that Republicans believed it was their duty to “step in front of this crash and rescue people from this collapsing health care system and replace it with something better.”

But Mr. Ryan has also been clear for weeks about the reality of the legislative timeline.

“The question there is: How long will it take for markets to be put in place, for markets to adjust?” Mr. Ryan told reporters on Jan. 5. “That question we don’t know the answer to.”