Support among American high school students for the First Amendment is stronger today than it has been in the last 12 years, according to the latest in a series of large nationwide surveys of the nation’s rising voters.

Some 91 percent of high school students say they believe that individuals should be allowed to express unpopular opinions, according to a Knight Foundation survey of nearly 12,000 students conducted last year. The survey is the sixth in a series, the first of which was carried out in 2004, when 83 percent supported such rights.

“What we’ve seen since 2004 is a slow but steady increase in support,” said Kenneth Dautrich, the study’s lead author and the president of the Stats Group, a statistical and data services firm.

Here’s a look at some of the top findings.

Support, but with limits

High school students may broadly back the First Amendment, but not without limits: Their support is tempered depending on the kind of speech and where it’s delivered.

“While support for the First Amendment as a general concept has never been higher, the devil’s in the details,” said Jonathan Sotsky, director of strategy and assessment for the Knight Foundation.

Ninety-one percent of the students may support the right to express unpopular opinions in general, but only half as many — 45 percent — support that right when the speech in question is offensive to others and made in public. Bullying speech enjoys slightly less backing, and students are even less supportive of either kind of speech when it’s delivered on social media. 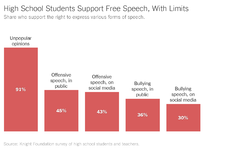 Many students find little sacred in professional reporting: More than half put as much or more trust in photos, videos and accounts shared by individuals online than in traditional news sources. The 726 teachers surveyed, however, were far more skeptical of the online postings.

Students may have faith in firsthand accounts shared online, but they are still generally wary of the news they see there. Eighty-two percent said they had “some” or “a lot” of trust in the information found in newspapers, compared with 77 percent for television news and 70 percent for news websites. Just 49 percent reported similar levels of trust in news shared on social media. 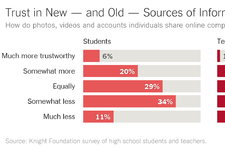 Graphic | Trust in New — and Old — Sources of Information

Students get their news on mobile devices

The survey results suggest that high school students and adults differ greatly in how they consume news. 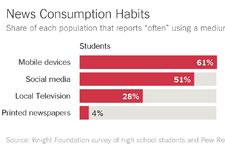 Students are far less concerned about their privacy on the internet than adults, according to the survey. But that is changing: In 2016, 76 percent were somewhat or very concerned about privacy online, compared with 70 percent two years earlier. 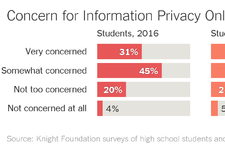