Finally, Proof That Managing for the Long Term Pays Off 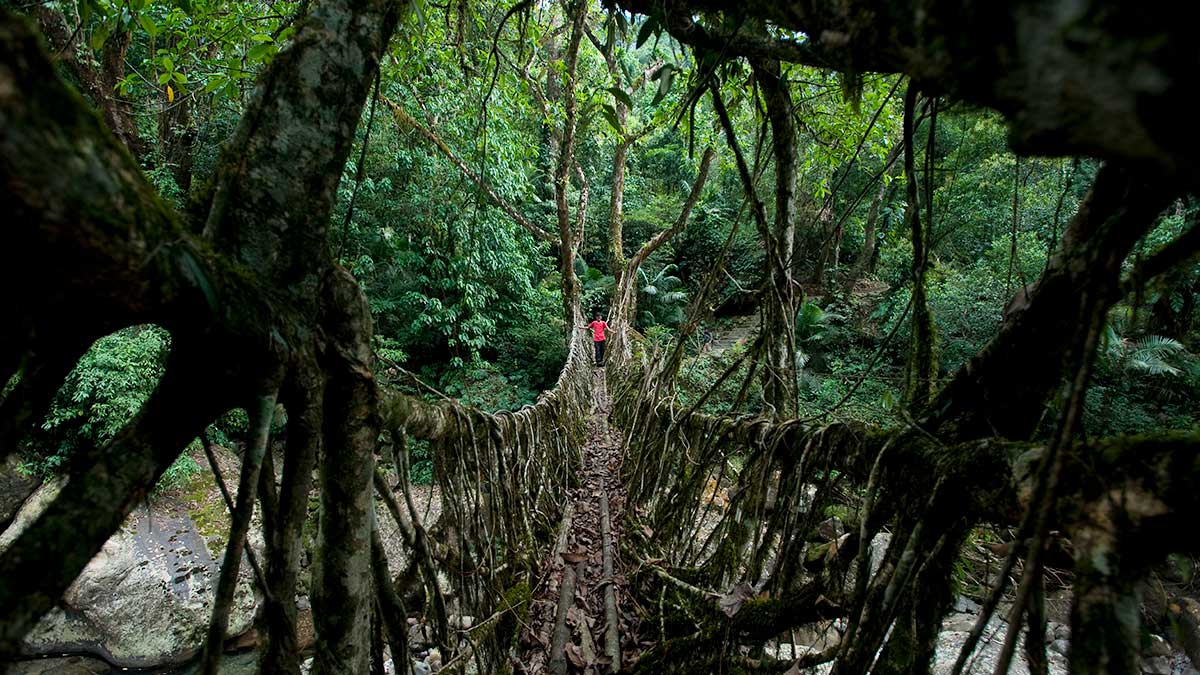 Companies deliver superior results when executives manage for long-term value creation and resist pressure from analysts and investors to focus excessively on meeting Wall Street’s quarterly earnings expectations. This has long seemed intuitively true to us. We’ve seen companies such as Unilever, AT&T, and Amazon succeed by sticking resolutely to a long-term view. And yet we have not had the comprehensive data needed to quantify the payoff from managing for the long term — until now.

New research, led by a team from McKinsey Global Institute in cooperation with FCLT Global, found that companies that operate with a true long-term mindset have consistently outperformed their industry peers since 2001 across almost every financial measure that matters. 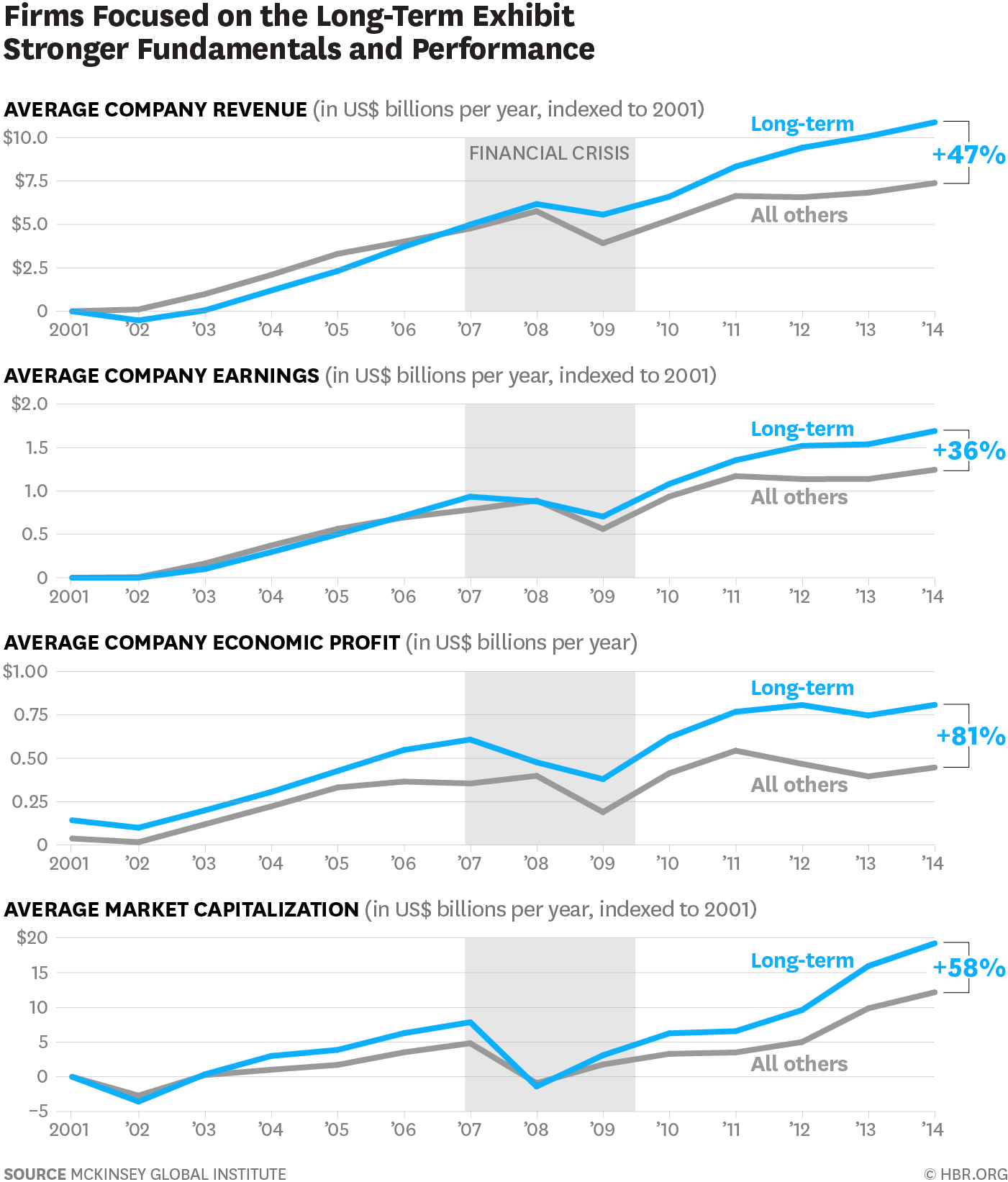 The differences were dramatic. Among the firms we identified as focused on the long term, average revenue and earnings growth were 47% and 36% higher, respectively, by 2014, and market capitalization grew faster as well. The returns to society and the overall economy were equally impressive. By our measures, companies that were managed for the long term added nearly 12,000 more jobs on average than their peers from 2001 to 2015. We calculate that U.S. GDP over the past decade might well have grown by an additional $1 trillion if the whole economy had performed at the level our long-term stalwarts delivered — and generated more than five million additional jobs over this period.

Who are these overachievers and how did we identify them? We’ll dive into those answers shortly. But first, it’s worth pausing to consider why finding conclusive data that establishes the rewards from long-term management has been so hard — and just how tangled the debate over this issue has been as a result.

In recent years we have learned a lot about the causes of short-termism and its intensifying power. We know from FCLT surveys, for example, that 61% of executives and directors say that they would cut discretionary spending to avoid risking an earnings miss, and a further 47% would delay starting a new project in such a situation, even if doing so led to a potential sacrifice in value. We also know that most executives feel the balance between short-term accountability and long-term success has fallen out of whack; 65% say the short-term pressure they face has increased in the past five years. We can all see what appear to be the results of excessive short-termism in the form of record levels of stock buybacks in the U.S. and historic lows in new capital investment.

But while measuring the increase in short-term pressures and identifying perverse incentives is fairly straightforward, assessing the ultimate impact of corporate short-termism on company performance and macroeconomic growth is highly complex. After all, “short-termism” does not correspond to any single quantifiable metric. It is a confluence of so many complex factors it can be nearly impossible to pin down. As a result, despite persistent calls for more long-term behavior from us and from CEOs who share our views, such as Larry Fink of BlackRock and Mark Wiseman, the former head of the Canada Pension Plan Investment Board, a genuine debate has continued to rage among economists and analysts over whether short-termism really destroys value.

Academic studies have linked the possible effects of short-termism to lower investment rates among publicly traded firms and decreased returns over a multiyear time horizon. Ambitious work has even attempted to quantify economic growth foregone due to cuts in R&D expenditure driven by short-termism, putting it in the range of about 0.1% per year. Other researchers, however, remain skeptical. How, they ask, could corporate profits in the U.S. remain so high for so long if short-termism were such a drag on performance? And isn’t the focus on quarterly results a natural outgrowth of the rigorous corporate governance that keeps executives accountable?

What We Actually Measured — and the Limits of Our Knowledge

To help provide a better factual base for this debate, MGI, working with McKinsey colleagues from our Strategy & Corporate Finance practice as well as the team at FCLT Global, began last fall to devise a way to systemically measure short-termism and long-termism at the company level. It started with developing a proprietary Corporate Horizon Index. The data for this index was drawn from 615 nonfinance companies that had reported continuous results from 2001 to 2015 and whose market capitalization in that period had exceeded $5 billion in at least one year. (We wanted to focus on companies large enough to feel the potential short-term pressures exerted by shareholders, boards, activists, and others.) Collectively, our sample accounts for about 60%–65% of total U.S. public market capitalization over this period. To further ensure valid results and to avoid bias in our sample, we evaluated all companies in our index only relative to their industry peers over several years, and conducted other tests and controls to ensure statistical robustness.

One final caveat: While we firmly believe our index enables us to classify companies as “long-term” in an unbiased manner, our findings are descriptive only. We aren’t saying that a long-term orientation causes better performance, nor have we controlled for every factor that could impact the relationship between those two. All we can say is that companies with a long-term orientation tend to perform better than similar but short-term-focused firms. Even so, the correlation we uncovered between behaviors that typify a longer-term approach and superior historical performance deliver a message that’s hard to ignore.

To construct our Corporate Horizon Index, we identified five financial indicators, selected because they matched up with five hypotheses we had developed about the ways in which long- and short-term companies might differ. These indicators and hypotheses were:

After running the numbers on these indicators, two broad groups emerged among those 615 large and midcap U.S. publicly listed companies: a “long-term” group of 164 companies (about 27% of the sample), which were either long-term relative to their industry peers over the entire sample or clearly became more long-term between the first half of the sample period and the second half, and a baseline group of the 451 remaining companies (about 73% of the sample). The performance gap that subsequently opened between these two groups of companies offers the most compelling evidence to date of the relative cost of short-termism — and the real payoff that arises from managing for the long term.

Trillions of Dollars of Value Creation at Stake

To recap, from 2001 to 2014, the long-term companies identified by our Corporate Horizons Index increased their revenue by 47% more than others in their industry groups and their earnings by 36% more, on average. Their revenue growth was less volatile over this period, with a standard deviation of growth of 5.6%, versus 7.6% for all other companies. Our long-term firms also appeared more willing to maintain their strategies during times of economic stress. During the 2008–2009 global financial crisis, they not only saw smaller declines in revenue and earnings but also continued to increase investments in research and development while others cut back. From 2007 to 2014, their R&D spending grew at an annualized rate of 8.5%, greater than the 3.7% rate for other companies.

Another way to measure the value creation of long-term companies is to look through the lens of what is known as “economic profit.” Economic profit represents a company’s profit after subtracting a charge for the capital that the firm has invested (working capital, fixed assets, goodwill). The capital charge equals the amount of invested capital times the opportunity cost of capital — that is, the return that shareholders expect to earn from investing in companies with similar risk. Consider, for example, Company A, which earns $100 of after-tax operating profit, has an 8% cost of capital and $800 of invested capital. In this case its capital charge is $800 times 8%, or $64. Subtracting the capital charge from profits gives $36 of economic profit. A company is creating value when its economic profit is positive, and destroying value if its economic profit is negative.

With this metric, the gap between long-term companies and the rest is even bigger. From 2001 to 2014 those managing for the long term cumulatively increased their economic profit by 63% more than the other companies. By 2014 their annual economic profit was 81% larger than their peers, a tribute to superior capital allocation that led to fundamental value creation.

No path goes straight up, of course, and the long-term companies in our sample still faced plenty of character-testing times. During the last financial crisis, for example, they saw their share prices take greater hits than their short-term counterparts. Afterward, however, the long-term firms significantly outperformed, adding an average of $7 billion more to their companies’ market capitalization from 2009 and 2014 than their short-term peers did.

While we can’t directly measure the cost of short-termism, our analysis gives an indication of just how large the value of what’s being left on the table might be. As noted earlier, if all public U.S. companies had created jobs at the scale of the long-term-focused organizations in our sample, the country would have generated at least five million more jobs from 2001 and 2015 — and an additional $1 trillion in GDP growth (equivalent to an average of 0.8 percentage points of GDP growth per year). Projecting forward, if nothing changes to close the gap between the long-term group and the others, then the U.S. economy could be giving up another $3 trillion in foregone GDP and job growth by 2025. Clearly, addressing persistent short-termism should be an urgent issue not just for investors and boards but also for policy makers.

Where Do We Go from Here?

Our research is just a first step toward understanding the scope and magnitude of corporate short-termism. For instance, our initial dataset was limited to the U.S., but we know the problem is a global one. How do the costs and drivers differ by regions? Our sample set consists only of publicly listed companies. How do the effects we discovered differ among private companies or among public companies with varying types of ownership structures? Are there metrics that can help predict when a company is becoming too short-term — and how do they differ among industries? Most important, what are the interventions that will prove most effective in shifting organizations onto a more productive long-term path?

On this last point, we and many others have identified steps that executives, boards, and institutional investors can take to achieve a better balance between hitting targets in the short term and operating with a persistent long-term vision and strategy. These range from creating investment mandates that reward long-term value creation, to techniques for “de-biasing” corporate capital allocation, to rethinking traditional approaches to investor relations and board composition. We will return to HBR in coming months with more data and insights into how companies can strengthen their long-term muscles.

The key message from this research is not only that the rewards from managing for the long term are enormous; it’s also that, despite strong countervailing pressures, real change is possible. The proof lies in a small but significant subset of our long-term outperformers — 14%, to be precise — that didn’t start out in that category. Initially, these companies scored on the short-term end of our index. But over the course of the 15-year period we measured, leaders at the companies in this cohort managed to shift their corporations’ behavior sufficiently to move into the long-term category. What were the practical actions these companies took? Exploring that question will be a major focus for our research in the coming year. For now, the simple fact of their success is an inspiration.