Facing harsh criticism, a Harvard dean said early Friday morning that he was revoking his invitation to Chelsea Manning, a former United States soldier convicted of leaking classified information, to be a visiting fellow at the university.

The sudden turnabout by the Harvard Kennedy School came after a day of intense backlash over the university’s announcement on Wednesday that Ms. Manning would become a visiting fellow at the Institute of Politics this school year. Douglas W. Elmendorf, the dean of the Harvard Kennedy School, said that while the university encourages a diversity of opinions and does not shy from controversy, naming Ms. Manning a fellow was a mistake that he regretted making.

“I see more clearly now that many people view a visiting fellow title as an honorific, so we should weigh that consideration when offering invitations,” Mr. Elemendorf wrote in a letter posted on the Harvard Kennedy School website early Friday morning. “I apologize to her and to the many concerned people from whom I have heard today for not recognizing upfront the full implications of our original invitation.”

Ms. Manning was among a group, including Sean Spicer, the former White House press secretary, named on Wednesday as visiting fellows at the Kennedy School. Fellows travel to Harvard to meet with students and discuss politics and other topics.

Mr. Elemendorf said the university had extended the fellowship to Ms. Manning, who was sentenced to 35 years in prison for providing classified information to WikiLeaks, because she fit the Kennedy School’s tradition of asking influential people to address students. 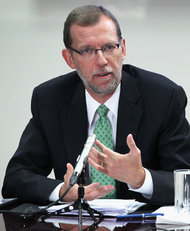 Douglas W. Elmendorf, the dean of the Harvard Kennedy School, in August 2014, when he was the director of the Congressional Budget Office.

While the school is revoking the title of visiting fellow for Ms. Manning, she is still invited to spend a day at the school and speak at a forum, the dean said.

The decision by the Kennedy School followed forceful denunciations by a former top official at the C.I.A. and the current director at the agency.

Michael J. Morell, a deputy director at the intelligence agency under President Barack Obama, resigned as a fellow on Thursday, calling the invitation to Ms. Manning “wholly inappropriate.” He said it “honors a convicted felon and leaker of classified information.”

“It is my right, indeed my duty, to argue that the school’s decision is wholly inappropriate and to protest it by resigning from the Kennedy School,” Mr. Morell wrote to Mr. Elmendorf. The letter was obtained and reported on by CBS News, where Mr. Morell is a national security contributor.

Later on Thursday, the director of the C.I.A., Mike Pompeo, withdrew from a Harvard forum he was scheduled to participate in that night, citing Ms. Manning’s fellowship as the reason.

Michael Morell, a former deputy director at the C.I.A., resigned as a fellow at Harvard on Thursday, calling the invitation to Ms. Manning “wholly inappropriate.”

“Ms. Manning betrayed her country,” Mr. Pompeo, who graduated from Harvard Law School, wrote in a letter to a Kennedy School official, adding that he commended Mr. Morell’s decision to resign.

He added, “It has everything to do with her identity as a traitor to the United States of America and my loyalty to the officers of the C.I.A.”

Ms. Manning was convicted in 2010 for giving WikiLeaks hundreds of thousands of classified diplomatic cables and military reports from the wars in Afghanistan and Iraq. Mr. Obama commuted her 35-year sentence in January, one of his final acts as president, and she was released in May.

Since 2013, Mr. Morell had served as a nonresident senior fellow at the Belfer Center for Science and International Affairs, which is also part of the Kennedy School. In his letter, Mr. Morell said he worried that Ms. Manning’s actions would “encourage others to leak classified information as well.”

“I have an obligation to my conscience,” he wrote.