Economic View: Is the U.S. Economy Too Dynamic, or Not Dynamic Enough?

If you’re an economic technocrat staring at a dashboard of official indicators of how the United States is doing, these look like pretty good times.

The unemployment rate is low. Gross domestic product is growing. Wages are rising a good bit faster than inflation, which is very modest. These may not be all-out boom times, but as far as economic policy goes, it looks like a job well done.

Your countrymen, it is amply clear, do not agree.

In polls, nearly twice as many Americans viewed the nation as being on the wrong track as the right one, and as recently as early November many more people saw the economy as getting worse than getting better. Those economic assessments have flipped since the election, driven by Republicans apparently feeling better about things, mainly because President Trump has promised to change the country’s direction.

Let’s consider Mr. Trump’s rise, the anti-establishment energy behind the presidential campaign of Senator Bernie Sanders, and parallels in the politics of Britain and other advanced nations. It takes no grand leap of logic to conclude that something is rotten in many people’s economic lives that hasn’t been picked up by the headline data that government statistical agencies publish every month.

But what exactly has gone so wrong?

One set of answers boils down to this: The economy has become too volatile and uncertain. Perhaps the dissatisfaction is driven by globalization, automation and the decline of employers’ implicit promises to offer workers jobs through thick and thin. These factors have made it harder for people to get good-paying jobs and to hold onto them for decades. High levels of inequality mean many of the benefits of growth don’t accrue for people at the middle and bottom of the pay scale.

All of this has hammered people without an advanced education and left them feeling unmoored and without opportunity, even if by narrow measurements jobs are plentiful and compensation is rising.

Robert Johnson, the president of the Institute for New Economic Thinking, argues that the cumulative impact of rapid technological change and shifts in work can have downsides that economists should try to account for more rigorously.

“When firms invest in technical change that disrupts employment structures,” Mr. Johnson said, “their decisions focus solely on private profit and neglect the costly side effects that society must bear. When one small firm adopts a new technology displacing workers, this may not be a societal crisis. When many firms do this at the same time, the changes in the nature of production and employment across the nation become a profound social problem.”

Economists speak of “negative externalities” — what happens, for example, when a firm pollutes the air, making everyone else worse off. In this argument, rapid change, when it takes place across many industries at once, is a negative externality that we need to try to account for, particularly “when the economic insecurity leads to a desperate and extreme politics,” Mr. Johnson said.

In short, one could summarize this set of complaints as the economy’s having become too dynamic for its own good. 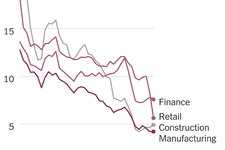 Graphic | Fewer New Businesses Are Being Formed Since the 1970s, the rate at which companies have been started up has fallen across sectors.

But a different line of research offers an alternate theory.

A new report from the Economic Innovation Group, a research outfit funded largely by technology executives, suggests that the real problem isn’t too much dynamism but too little. The authors describe trends that have blocked the formation of new businesses and jobs and that are having a stultifying effect on the economy.

They cite federal data showing that in 1977, more than 16 percent of firms in the United States were less than a year old, a figure that had fallen to half that by 2014. New businesses have similarly done less to power new jobs than they once did, while the biggest, oldest firms account for a rising share of economic activity. Market concentration increased for two-thirds of industries between 1997 and 2012, the report found. That coincided with a steady rise in corporate profits as a share of gross domestic product, and in a decline in the share going to workers’ wages.

The job market has become less fluid. The proportion of workers who change jobs in a given year has fallen from 12 percent in 2000 to 7 percent in 2015. Workers are also less likely to migrate within the country. In the 1970s, more than 3 percent of the population moved across state lines in a given year; since 2006, the number has hovered around 1.5 percent.

Most startlingly, the creation of new companies has been concentrated in a small number of metropolitan areas: Dallas, Houston, Los Angeles, Miami and New York. From 2010 to 2014, those five regions created as many net new businesses as the rest of the country combined. If you didn’t live in them, or were unwilling to move to them, you were out of luck.

“The debate is so thoroughly dominated by the idea that there is too much change, too much churn, too much disruption,” said John Lettieri, a co-founder of the innovation group. “And it may feel that way to many people. But we think that what they’re really feeling is a lack of creation of new businesses and new jobs.”

Old industries have always faced pressure from various forces. The rise of computers obliterated countless jobs for clerks from the 1960s through the 1990s. New steel-making technology rendered old plants obsolete in the 1980s.

But in those earlier eras, new industries and new jobs were emerging quickly to take their place. Now, that entrepreneurial ferment, except for in a few megacities, isn’t happening as rapidly.

Both the “too much dynamism” and the “too little dynamism” narratives for what ails American workers have different potential remedies, which cut across ideological lines.

If you believe that increased market concentration is a central problem, you might consider tougher antitrust enforcement, a favorite of liberals, but also explore conservative arguments that complex regulation creates an unfair advantage for big companies that can employ scores of lawyers.

If you look at globalization as the main problem, you might see some Trumpian renegotiation of trade deals and arm-twisting to get companies to keep jobs at home as being in order. But you could also argue for a more generous social safety net and government funding for retraining.

Of course, the too much versus too little dynamism diagnoses aren’t mutually exclusive; there are probably elements of truth in both. Maybe the economy really isn’t working for many Americans because globalization, automation and changing labor practices have thrown them to the wolves. But maybe there are also deep-seated structural shifts preventing communities and individuals from tapping the great opportunities the modern economy offers.

Regardless, as the seismic political events of 2016 make clear, the data alone may not tell you much about how the economy looks to millions of people or what might be done to make life better for them.