SEATTLE — The moneymaking machines at the core of Amazon, Microsoft and Alphabet, the parent company of Google, are notably different. But the respective kings of online retailing, software and internet search should all credit a relatively new line of business for lifting their financial results.

In their quarterly earnings reports on Thursday, the three said cloud computing — through which they rent computing services and online access to software hosted in their data centers — was growing faster than their larger, older businesses.

The impact of cloud computing was particularly noticeable at Amazon, far and away the leader in this still-young business. The profit Amazon can make on cloud-computing services is significantly bigger than in its retail sales, and that has helped turn the Seattle company from a consistent money-loser to a respectable moneymaker. 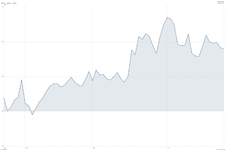 For the first quarter, which ended March 31, Amazon said its total net income rose to $724 million, or $1.48 a share, from $513 million, or $1.07 a share, a year ago. The company said the $890 million in operating income from its cloud business, called Amazon Web Services or A.W.S., accounted for most of its overall profits.

The worry, however, is that this cannot last forever, not with Microsoft and Google making big investments in their own cloud businesses while trying to undercut Amazon with lower prices.

That has not happened — at least not yet. While A.W.S. revenue grew at a slower pace than in the past, it still rose a healthy 43 percent to $3.66 billion. The company’s shares rose 1 percent in after-hours trading.

“There’s always this moment when people think, ‘Is the magic going to run out?’” said James McQuivey, an analyst at Forrester Research. “It just hasn’t panned out.”

Microsoft — the No. 2 player in cloud computing — is steadily making the transition to that business, relying less and less on personal computer software, the company’s mainstay for decades.

Microsoft’s Azure cloud hosting business grew by 93 percent from the year-earlier quarter. And the cloud version of its productivity software Office 365, sold to companies as an online service, grew by 45 percent.

For Alphabet, cloud efforts are catching on, though it trails far behind Amazon and Microsoft. Alphabet does not break out cloud revenues, but its “Google other revenues” segment, which includes the cloud, jumped 49 percent from the first quarter 2016.

Ruth Porat, Alphabet’s chief financial officer, said in a conference call with analysts that the Google cloud platform was one of the company’s “fastest-growing businesses,” though she offered no details.

Still, nearly all of Alphabet’s business comes from advertising on the Google sites and services, which is still expanding despite tough competition from Facebook.

First-quarter earnings increased to $7.73 a share while revenue jumped 22 percent to $24.75 billion. Average estimates from Thomson Reuters had been for $7.39 a share in earnings with revenue of $24.19 billion.

The stock rose 4 percent in after-hours trading on the news.

Alphabet’s speculative ventures, including its home electronics division, Nest, and its autonomous car division, Waymo, are listed as “other bets.” In the first quarter, the other-bets revenue rose 48 percent to $244 million. But losses increased 10 percent to $855 million.

Google’s total digital ad revenue has doubled since 2012. But for all the success that demonstrates, so much of advertising is becoming digital that Google’s share of the online portion is actually slipping, according eMarketer. Five years ago, Google had a 35.9 percent share of global digital ad revenue, the data firm said. In 2016, it was 32.8 percent.

The pots of money Alphabet is making could provide some consolation after major brands, including AT&T and Verizon, recently learned that their ads were appearing alongside inflammatory YouTube videos that promoted hate speech. Some advertisers vowed to drop YouTube, a Google property, until the problem was fixed.

For its part, Microsoft’s overall revenue rose 8 percent in the quarter, to $22.09 billion. That was enhanced by $975 million in revenue from LinkedIn, the professional networking site that Microsoft bought for $26 billion in a deal that closed in December.

Microsoft’s total operating revenue, which includes the deferred accounting for sales of its Windows 10 personal computer operating system, was higher, at $23.56 billion. That figure is the focus of Wall Street analysts, and the result was slightly below their consensus estimate of $23.62 billion, as compiled by Thomson Reuters.

The modest shortfall was attributable to weaker-than-expected sales of Microsoft’s Surface tablet computers during the quarter, which were down 26 percent. The company’s share price fell about 1 percent in after-hours trading.

Microsoft’s net income rose 28 percent to $4.80 billion. Its operating earnings per share, which excludes one-time gains, increased 16 percent to 73 cents a share, ahead of the average analyst estimate of 70 cents a share.

The company’s results also added to evidence that the personal computer industry is stabilizing and even growing, at least among corporate customers.

Sales of Windows operating systems to PC makers rose 5 percent in the quarter. The market research firm IDC recently reported that PC shipments grew slightly during the first quarter of 2017, the first gain in five years.

Microsoft’s Windows sales to PC makers are advancing by more than the rate of PC shipments, because of a shift to higher-priced versions as corporate customers upgrade to Windows 10.

Overall revenue at Amazon rose 23 percent to $35.71 billion from $29.13 billion in the same period a year ago. The company’s results were well ahead of the $1.12-a-share average earnings estimate and $35.3 billion revenue estimate of analysts compiled by Thomson Reuters.

“We’re continuing to look for things customers love, can grow to be large and provide strong financial returns in the long run and can last for decades,” he said.