The authorities in Cleveland pressed their search on Monday for a man who posted a video of a fatal shooting on Facebook on Sunday.

At a news conference, officials said they did not know the whereabouts of the man, Steve Stephens, 37, who was being sought in what they said was a random shooting of Robert Godwin Sr., 74. (The police initially identified him as Robert Goodwin Sr.)

Chief Calvin D. Williams of the Cleveland Police Department said detectives have been “unceasingly” pursuing leads since the shooting took place at 2 p.m. on Sunday.

“We’re still asking Steve to turn himself in and, if he doesn’t, we’ll find him,” the chief said.

The authorities did not know Mr. Stephens’ location or condition. Stephen D. Anthony, the special agent in charge of the F.B.I.’s Cleveland division, said, “At this point, he could be a lot of places.”

A warrant for Mr. Stephens for a charge of aggravated murder has been issued, and the police asked residents of Indiana, Michigan, New York, northeast Ohio and Pennsylvania to be on alert. Mr. Stephens said in a video that he had killed multiple people, but the police said there was only one known victim.

Chief Williams said detectives had talked to Mr. Stephens on the phone, but he did not elaborate. Mr. Stephens had many motor vehicle violations but no criminal record, he said. 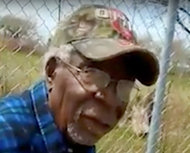 In the minute-long shooting video, a driver pulls up to an older man on a sidewalk. The driver asks the man to say a person’s name, then pulls out a gun and shoots him. Afterward, the victim can be seen on the sidewalk, with a streak of what appears to be blood near his head.

Mr. Stephens blamed his actions on his mother and an ex-girlfriend, Joy Lane, who in a statement said she was sorry “that all of this has happened,” television station Cleveland19 reported.

“My heart & prayers goes out to the family members of the victim(s),” she wrote in a message to CBS News. “Steve really is a nice guy … he is generous with everyone he knows. He was kind and loving to me and my children.”

Mr. Stephens has worked at Beech Brook, a behavioral health agency that serves children, since 2008, the agency said in a statement. He had been a vocational specialist since April 2015 and before that was a youth mentor.

“We were shocked and horrified yesterday to learn about the situation involving the threats by Steve Stephens and the tragic shooting of Mr. Godwin,” the agency said, adding that its office would be closed on Monday “out of concerns for the safety of our staff, clients and other visitors to our sites.”

Chief Williams said several GoFundMe fund-raising accounts had been created on behalf of Mr. Godwin but that the family had asked the public not to donate to those accounts. He said the victim’s family would make an announcement about fund-raising arrangements.