SHANGHAI — China’s economic data is usually very predictable. But occasionally there are surprises, though so small that by other countries’ standards they would barely be noticed.

The country’s economy, the world’s second-largest behind that of the United States, grew 6.9 percent in the first quarter, led by strong expansion at factories, Chinese officials said Monday. The pace was a slight acceleration in the economic tempo here after five consecutive quarters in which China reported growth of either 6.7 percent or 6.8 percent, a remarkable period of stability in the official data.

Most economists had predicted that China would again report 6.8 percent growth for the first quarter. The slightly higher figure announced on Monday reflected the construction industry’s heavy use of steel, which had been expected to slow, while investment in electronics factories rose as overseas demand strengthened.

Government data nonetheless holds some warning signs. While a torrent of mortgages issued by the state-controlled banking sector has helped housing sales, the number of housing starts has been rising even faster this spring.

That mismatch will add to the number of unsold homes, at a time when government policy makers are concerned whether the easy availability of mortgages may have already driven housing prices to unaffordable heights. Last month at the National People’s Congress, Premier Li Keqiang lowered China’s growth target for this year to “around 6.5 percent or higher, if possible,” suggesting that the government’s economists expected slower growth.

But for now, Chinese officials are savoring a strong quarter and are quick to attribute it to measures taken last year to close inefficient coal mines and factories and to improve overall productivity.

“Since last year with supply-side reforms, the demand-and-supply relationship is obviously improving and enterprises have more confidence,” Mao Shengyong, the spokesman for the National Bureau of Statistics, said at a news conference in Beijing.

There are plenty of reasons not to take the overall stability in economic growth, or even slight acceleration, at face value. Economists instead will parse more detailed data on trade, construction and retail spending to divine whether China — the largest single contributor to global growth in recent years — will continue to keep the world economy in gear.

Yet based on those other data points, the Chinese economy appears to be steaming along, even as Beijing begins trying to rein in rampant lending. Industrial production increased 7.6 percent in March, the best performance since the end of 2014. Investment and retail sales were also unexpectedly strong.

The trick will be to continue that growth while also trying to curb China’s dependence on loans by big state-owned banks to large state-owned enterprises, which has allowed these enterprises to go on spending and investing even in money-losing ventures. The government has been reluctant to risk protests by curtailing lending this year, particularly with a big conclave of the Communist Party to be held in late autumn.

Official data shows that China’s economy has grown 6.7 percent to 7.2 percent for the last 11 quarters, a stunningly long period of stability by international standards. By comparison, figures for growth in the United States can move by one or two full percentage points from quarter to quarter.

Now, China is not exactly like the rest of the world. The government directly controls its big banks, huge state-owned companies and other tools it can use to hit its growth targets. The government spends heavily on new roads and rail lines, and a surge in government spending in March helped push the economy along. But the government has much less control over retail spending and private investment, which should make the data more volatile. 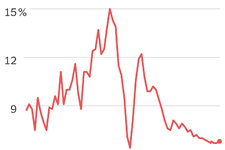 Chinese officials themselves have said the country’s data can be unreliable, though outright fraud has not been documented at the national level. Many economists believe Beijing uses a combination of policy and statistical sleight-of-hand to achieve steady results. By this theory, policy makers there make moves to get what they want, like expanding infrastructure spending and mortgage lending during slowdowns, but they also engage in data smoothing by understating growth in good years and overstating growth in bad years.

Despite the dubious predictability, other figures suggest that China’s economy is expanding at a vigorous pace.

Economists had expected industrial production to maintain in March the same 6.3 percent growth that it demonstrated in January and February and were taken by surprise by Monday’s announcement that production was up 7.6 percent. That means China’s factories are staying busy. Exports are one reason, as the world appears to be showing more appetite for the types of things that China churns out and sends abroad. The Treasury Department’s decision in Washington on Friday not to name China as a currency manipulator, despite a campaign promise by President Trump to do so, removes another possible threat to China’s exports.

Consumer electronics have led China’s export boom in recent years and have also been at the center of rising domestic demand. Production continues to surge for devices like smartphones and energy-efficient light-emitting diodes, an alternative to compact fluorescent lights or traditional incandescent bulbs.

Liu Rulong, 25, a salesman for Guangzhou Juhong Optoelectronics, a manufacturer of light-emitting diodes based in southeastern China, said that his sales were up 20 percent. He said he was expecting monthly bonuses this spring of $1,160 to $1,450 and that some colleagues earned even more.

“I’m still in the middle — some salesmen did far better than me,” Mr. Liu said.

Real estate is a big factor in China’s growth. Last year, China’s central bank urged commercial banks to step up mortgage lending to support the housing market, which had been weakening in some cities. The additional mortgages have produced frenzied buying over the past year.

March showed a big bulge of extra steel production last year as construction started to take off. So March this year was expected to indicate a slowdown. But steel output last month jumped 7.1 percent from last year’s high base.

All this comes amid signs that China is trying to curb the lending that has driven so much of its growth in recent years. That lending kept the economy going but resulted in heavy debt that economists worry could hinder the country’s growth for years to come. So far, the government’s modest pressure on banks to limit lending, notably through slight increases in short-term interest rates, seems to have had only a limited impact on overall bank lending, however, and little effect on mortgage lending.

Chinese households put as much as nine-tenths of their savings into real estate, more than households in many other countries. That has continued to produce strong demand for new apartments, which in turn has led to a brisk pace of construction.

Credit data released on Friday showed that bank loans to households, a category in which mortgage lending plays a leading role, leapt 24.6 percent in March compared to the same month a year ago, even as other categories of lending began slowing somewhat.

But the National Bureau of Statistics said on Monday that overall investment in fixed assets, including factories as well as office towers and apartment buildings, climbed 8.8 percent for the first quarter, little changed from a pace of 8.9 percent for the first two months of the year despite the central bank’s modest moves to limit credit. Private investment quickened in March, offsetting a slight slowing in what remains heavy investment by the government, particularly in rail lines and other infrastructure.

Chinese blue-collar wages have surged as much as eightfold in the past dozen years. That has considerably eroded the country’s once-daunting advantage in labor costs compared with the West, but it has also produced a broad-based surge in prosperity that has fostered a rise in consumer spending.

The government has wanted for many years to shift the economy away from its dependence on investment and toward a greater reliance on consumption, but that process has been slow. The National Bureau of Statistics said on Monday that retail sales were up 10.9 percent in March from a year earlier, considerably stronger than economists’ expectations of a pace below 10 percent.