THE future of British trade after Brexit is shrouded in uncertainty. It is an unprecedented process, so it is hard to know where to look for clues as to how it may work out. One possibility is a country whose trading patterns were perhaps more disrupted than any other’s by Britain’s accession to the European Economic Community (EEC) in 1973: New Zealand.

Just as Brexit is likely to mean the end of British access to the single market, so “Brentry” ended New Zealand’s preferential access to the “mother country”. In 1961, when Britain first announced its intention to join the EEC, it took about half of New Zealand’s exports—a similar proportion to the EU’s share of British exports today.

New Zealand’s prime minister at the time, Keith Holyoake, warned his British counterpart, Harold Macmillan, that, without safeguards for its exports, New Zealand would be “ruined”. After years of negotiations, a transitional deal in 1971 agreed quotas for New Zealand butter, cheese and lamb over a five-year period, which helped to ease the shift away from Britain. Similarly—if in a much shorter time-span—Britain’s prime minister, Theresa May, now hopes to negotiate a transitional deal to smooth its departure from the EU.

New trading relationships can mitigate the loss of preferential access. New Zealand signed a free-trade deal with Australia in 1965, which boosted exports of manufactured goods. The share of trade with America and Japan also rose, once access to their beef markets had been negotiated. By the time Britain eventually joined the EEC in 1973, it took only 25% of New Zealand’s goods exports (and a paltry 3% now). More trade deals followed, including with China and South Korea. Mrs May’s government makes much of the prospects of concluding trade deals with non-EU countries—including, in fact, New Zealand.

Trade agreements, of course, entail compromises. In the 1960s, almost all of New Zealand’s exports of butter went to Britain. High levels of protectionism in rich countries meant no market could replace it. As a result, points out Brian Easton, of the Auckland University of Technology, New Zealand’s trade negotiators chose to maximise their EEC butter quota at the expense of access for other goods. British negotiators too will face plenty of tricky choices. A free-trade deal with New Zealand itself, for example, would enable access for British exports, but competition from New Zealand would squeeze British lamb producers. Similarly, countries such as India and Australia might seek a relaxation in immigration rules in return for the free movement of goods and services. Since it is believed concerns about immigration weighed heavily with Brexit voters, that is unlikely to prove popular.

The British and New Zealand cases differ in some important ways. Britain’s economy in recent years has been one of Europe’s fastest-growing. But the 1970s were tough for the New Zealand economy. Brentry was just one of many blows to buffet it. The oil shock, turbulence in commodity prices and a rise in protectionism in rich countries led to bouts of recession. A spate of radical liberalisation in the 1980s put the economy on a sounder footing. 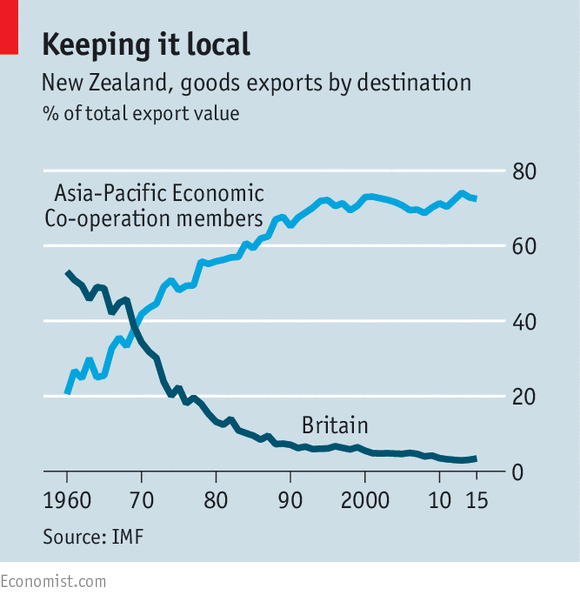 Also, New Zealand built closer trading links with neighbours. China, Australia and other members of the Asia-Pacific Economic Co-operation group, founded in 1992, now account for 72% of its exports (see chart). But ties with the neighbours are the very ones Britain wants to loosen. It will need relationships with countries that are farther away. And history shows that the greater the distance between two countries, the less they trade with each other. Technology may be weakening the link between trade and geography, but it is unlikely to make up for Britain’s reduced access to markets nearer by.

Less tangible factors may also make Britain’s negotiating position more awkward. New Zealand was able to play on British guilt over its abandonment of the Commonwealth. Memories of the second world war were still fresh: New Zealand’s soldiers had fought alongside the British; its farmers had nourished the home front. In contrast, few in the EU have much sympathy for the renegade British. And when Mrs May’s ministers do talk about the war, they usually make matters worse.