NASHVILLE, Tenn. – Murray Manuliak, a driver for Bison Transport was named the winner of the Truckload Carriers Association’s (TCA) Company Driver of the Year Award. 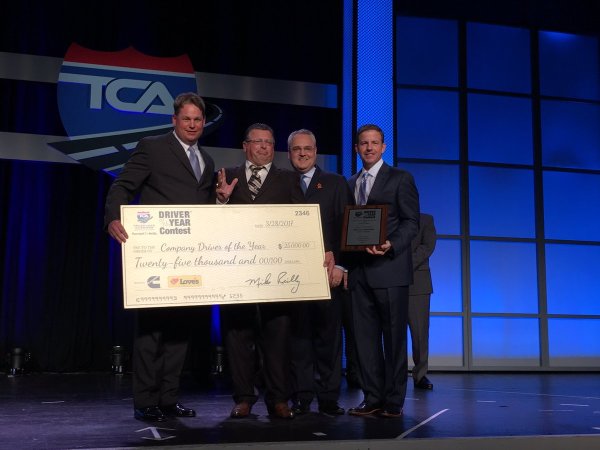 The award is one of two grand prizes the TCA gives out at its annual Awards Banquet as part of its Driver of the Year Contest that honors one company driver and one owner-operator. It recognizes professional drivers who are safe, enhance the public image of the trucking industry, and make influential contributions to their communities. Essentially, the winners of the award represent the utmost professional drivers in the industry.

Manuliak has been driving trucks professionally for more than a quarter century, accumulating more than 3.1 million consecutive accident-free miles. He is an in-cab instructor for Bison and takes part in Manitoba’s Truck Driving Championships.

“There are so many exceptional professional drivers in this industry and to be recognized as one of the best is truly very special,” Manuliak said upon accepting the award at the banquet on March 28. “I’ve been driving for 25 years and I’ve been with Bison for 15 of those. Bison has helped me get to where I am today. Even though it is us the drivers that receive these awards…it’s important to remember that accomplishments can’t be achieved alone…This award is as much a result of (Bison’s) effort as it is mine.”

David McGowan of WEL Companies and William Poteet of Saddle Creek Transportation were the runners up in the company driver award category.

The Owner-Operator of the Year Award went to Gary Buchs, a driver for Landstar System based in Jacksonville, Fla.

Over his 27-year career, Buchs has accumulated more than 2.3 million accident free miles. He has also earned a 10-year safe driving award and is committed to charity as he spends at least one week per year helping victims of wind or flood damage.

Runners up of the Owner-Operator Driver of the Year Award included Philip Keith of WEL Companies and Kevin Kocmich of Diamond Transportation System.