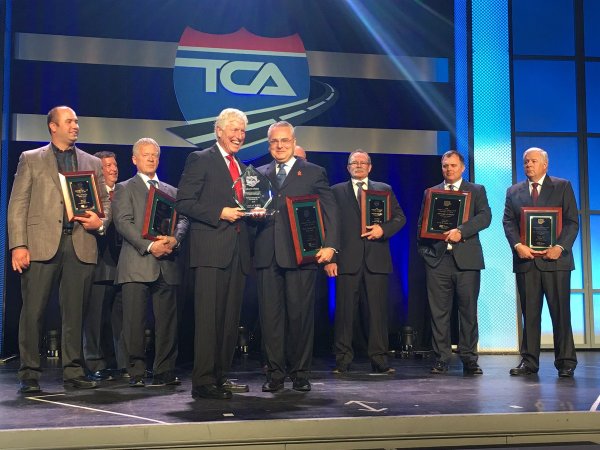 For the seventh year in a row, Bison Transport won the grand prize for the large carrier category.

According to Patrick Kuehl of Great West Casualty Company, which sponsors the award, Bison won the award because of its safety program that is “an amazing blend of safety initiatives” and because the company “puts its safety record at the forefront of everything it does.”

“On behalf of our executive management team and our employees and contractors I’d like to thank the TCA,” said Garth Pitzel, director of safety and driver development at Bison who accepted the award. “We’re absolutely fortunate we have 2500 people believing and supporting and executing on that through their daily actions. I’d like to congratulate all the award recipients and thank them for their dedication to safety and ensuring that they get their drivers home to their families.”

Bison has won the National Fleet Safety Award a total of ten times.

“As a small carrier, their company’s vision is to be seen as an innovative service partner,” said Kuehl. “It is rated number one in safety and customer satisfaction as judged by their customers.”

“I’m super honored to accept the award and take this recognition back to our team members,” Gary Coleman, president and CEO of Big Freight said upon acceptance.