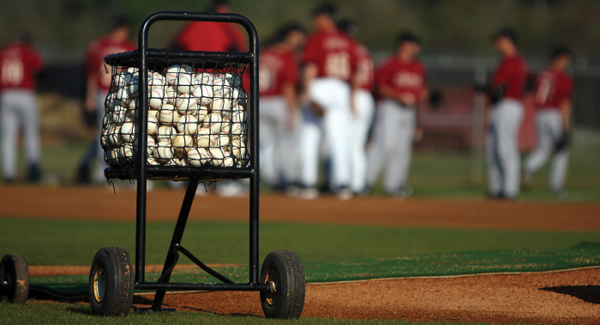 Off the diamond, truckers and clubhouse staff work tirelessly to execute the logistics of Spring Training. Here’s how they achieve this Haul of Fame accomplishment.

Once the historic Game 7 of the 2016 World Series drew to a close, the clubhouse staff of the Chicago Cubs and Cleveland Indians began planning for the next milestone on the baseball calendar: the annual migration to spring training fields.

In February, most of the 30 Major League Baseball teams relocate to Florida or Arizona for about two months of spring training prior to the regular season. It’s a logistical challenge that teams and their carriers have down to a science, and that expertise extends to supporting regular season games that span the nation. They pack up the baseballs, bats, uniforms, training tables, and exercise gear, load it on trailers, and head to less inclement weather.

Some teams, led by the Boston Red Sox, have created an event called Truck Day, when fans watch the teams load the trucks to hit the road for spring training.

In Boston, Truck Day—originally called Moving Day—started around 2000, says Kevin Carson, operations manager for New England Moving and Storage, when a few people came to watch the team load the truck for spring training. Today, about 1,500 fans, the occasional marching band, and media show up for the event, a bright spot in a dreary New England February. Driver Al Hartz has piloted the 53-foot truck for the 1,500-mile journey to Ft. Myers, Fla., for more than 15 years.

“I never knew there were so many people in Boston who wanted to watch a moving truck get loaded,” Carson says. “It’s essentially Boston’s version of Groundhog Day, the first sign of spring.”

In addition to the players’ equipment, the truckload usually includes front-office items, kitchen and food supplies for the clubhouse, equipment for the medical and training staff, marketing and promotional materials, and audio/visual equipment needed for the scoreboard crew shoots. There may also be personal items such as bicycles, golf clubs, and video games.

With five people, the trailer can be loaded in three hours, Carson estimates. “Loading is one of the easiest jobs we have because the clubhouse staff is prepared for our arrival,” he says. “You can’t tell if we are moving a family or a baseball team.”

The teams accumulate equipment during training, and the players load their personal effects on the trucks too, so in some cases two semis are required for the trip back north.

A-1 still handles the airport transfers for the Mets on road games, according to President Matt Schwartzberg. The company trucks the team’s travel gear to the airport, where the clubhouse staff loads it in the baggage hold of the charter aircraft that carries the players and staff. When the team returns, a driver and truck meet the team at the airport, no matter the time of day or night. A-1 conducts about 25 away game moves each season.

“When the team returns to Los Angeles from a road trip, we may have a truck there at 1 a.m. waiting for them,” Schwartzberg says. “That’s a big part of what we do.”

The Seattle Mariners also celebrate Truck Day before sending a semi truck on a three-day, 1,400-mile journey to their spring training facility in Peoria, Ariz.

“On any given day, the truck could be parked in front of a residential customer’s home,” says Chris Palange, president of Andrews Moving. “Our customers get a kick out of seeing it. People take pictures, and we get some good chatter going on social media.”

In February 2016, the load on the two Indians trucks bound to Arizona from Progressive Field included some 18,000 baseballs and 600 bats, bikes, golf clubs, workout equipment, pallets of bottled water, sunflower seeds, and even stadium mustard. Also on board was a black scooter that belongs to Indians Manager Terry Francona, who uses it to zip around the stadium complex.

While transporting the team’s gear to spring training may have its challenges, the return trip is where it can get dicey depending on the game schedule, according to Palange.

“There may not be much time between camp breaking and the first game of the season,” he says. “If the team starts the season on the road it’s easier, but if they start at home we have to push to get there in time.”

For nearby road games, such as Detroit, Andrews carries the gear by truck from Cleveland rather than loading it on the plane. The company regularly has a dedicated staffer, Scott Anderson, in the Indians clubhouse, and the driver, Ed Fisher, has handled the spring training run for years.

“Fisher has been doing this for so long he knows how to handle weather delays or other issues,” Palange says. “One winter, for example, he missed a lot of bad weather by going down south through Texas instead of cutting across the Midwest.”

For Cleveland’s road games, Anderson parks a truck at the stadium several hours ahead of time so players can begin loading their personal baggage on board, and they make an early delivery to load the plane. At the end of the game, they take anything left over to make the trip.

It takes coordination on the return trip to ensure the truck is waiting at the airport. “That’s usually in the wee hours of the morning,” Palange says. “Getting coordinated and back to the ballpark can make for some difficult nights for the person handling it.”

Many teams use a moving and storage company, often affiliated with Atlas or United, rather than an LTL carrier because spring training is more like a corporate move than a freight delivery. It takes white glove service to keep clubhouse staff and players happy.

“Just like our commercial moves, when companies have to be back to work on Monday morning so we need to get the office furniture and technology set up, we move players’ personal items so they can go back to work the next day,” Schwartzberg says. “I don’t recall any damage in the past 28 years. We take tremendous pride in that.”

Palange agrees that baseball logistics plays out more as a corporate move than a freight move. “Our drivers are used to moving people and handling household belongings with a lot of communication,” he says. “That application works best for this kind of service.”

But the pressure for on-time delivery is even higher than for a family waiting for their furniture, or a corporate office relocation. “We joke that we have all the baseballs and bats, so the Mets can’t start the season without us,” Schwartzberg says.

Like the Florida teams, the Arizona Diamondbacks are in a unique situation because they are located where the other teams travel. Still, each season the Diamondbacks pack up for the 25-minute trek from Chase Field in downtown Phoenix to Salt River Fields in Scottsdale for their spring regimen.

Roger Riley, senior director of team travel and clubhouse for the Diamondbacks, says his staff handles the logistics in house, renting a box truck and making several trips back and forth to move everything they need. Each year, the players wear new workout attire, so it’s delivered directly to the field.

“It’s nice that we don’t have to pack everything up,” Riley says. “And if we forget something, we can go get it. It’s a lot more low key than most of the other teams.”

Moving back to the stadium for the start of the regular season usually takes a few more trips. “We keep the truck for about one week, moving the gear we accumulate during spring training,” Riley says. “The trainers and strength staff each make a run with their equipment.”

Fortunately for road games, the teams stock the visiting clubhouses with most items needed for a game. But still the Diamondbacks take about 8,000 pounds of gear on a trip, and another 4,500 pounds of luggage, especially if they have to take cold weather clothing as well.

For a road game, the clubhouse staff, assisted by their visiting clubhouse counterparts, starts packing up right after the first pitch. By the 7th inning, the truck is loaded and ready for the airport. Within one hour after the game ends, the team is on the charter bus headed for their flight.

About 30 minutes after arriving at the airport, the gear is stowed, the team boards, and the charter flight is ready to take off. The players and staff go through security screening at the stadium so they can step right on to the plane.

An extended road trip can take its toll on the team and clubhouse staff.

“Last season, we started in San Diego, flew to Baltimore and then bused to Washington D.C.,” Riley says. “The team and staff were ready to go home.”

After 35 years in the sport, 22 of them involved in travel and equipment, Riley has baseball logistics down to a science, but always tries to avoid surprises.

“We try to get the job done with as little fanfare as possible,” he says. “We like to live unnoticed because that means we’re doing our job right.”

Sure, the trucking companies involved in baseball logistics enjoy the steady business. But they’re also in it for the love of the game, proud to help the hometown team in any way they can.

“There are definitely perks, such as being in the clubhouse and getting close to the players,” says Schwartzberg. “But waiting for that road trip from Kansas City at 3 a.m. can take its toll after a while. You have to love doing it.”