A Cheap Fix for Climate Change? Pay People Not to Chop Down Trees

The tropical forests in western Uganda, home to a dwindling population of endangered chimpanzees, are disappearing at some of the fastest rates on Earth as local people chop down trees for charcoal and to clear space for subsistence farming.

Now, a team of researchers has shown that there is a surprisingly cheap and easy way to slow the pace of deforestation in Uganda: Just pay landowners small sums not to cut down their trees. Their study, published in the journal Science on Thursday, demonstrated this by conducting something all too rare in environmental policy — a controlled experiment.

The idea of paying people in poorer countries to protect their forests has long attracted interest from those concerned about climate change. The United Nations set up a program, known as REDD Plus (for reducing emissions from deforestation and forest degradation), to channel $10 billion from wealthy donors like Norway and Japan to poorer nations to slow deforestation trends responsible for about 10 percent of man-made greenhouse gas emissions each year.

The idea sounds simple: When trees are cut down and decompose or are burned, they release the carbon dioxide they soaked up from the atmosphere. Keeping them intact can help slow the pace of global warming.

Yet many experts have long been skeptical that such “payment for ecosystem services” programs actually work. How does anyone know the money is not just flowing to people who would have preserved their forests anyway? What if people take money to protect their own land but then go cut down trees elsewhere?

Interactive Feature | Interested in Climate Change? Sign up to receive our in-depth journalism about climate change around the world.

“Unless you set up a randomized trial, where you’re carefully comparing people who take part in the program with people who aren’t, it’s hard to know if you’re having any effect,” said Seema Jayachandran, an economist at Northwestern University and the lead author of the study.

Her team randomly selected 60 villages in the Hoima and northern Kibaale districts of Uganda and offered owners of forested land $11.20 an acre a year if they did not cut their trees. Using satellite imagery, they then compared what happened in those villages to 60 “control” villages that were not offered payments.

Over the next two years, they saw forest cover drop 9.1 percent in the control villages. But in the villages where voluntary payments were offered, one-third of the landowners signed up and forest cover declined just 4.2 percent. Further analysis showed that deforestation was not simply shifting to nearby lands, as feared.

The researchers calculated that the program was a remarkably low-cost way of slowing climate change. Although they assumed that deforestation would rebound once the two-year program ended, the benefits of delaying the release of that carbon dioxide into the atmosphere came to $1.11 a ton, using the Environmental Protection Agency’s estimates of climate damage. That far exceeded the program’s cost of 46 cents a ton of carbon dioxide, which is many times cheaper than the cost of subsidizing solar panels or electric cars in wealthier countries. 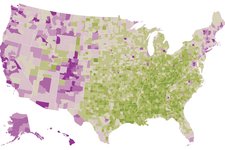 If the program were made permanent, the climate benefits would go up significantly, though Dr. Jayachandran cautioned that further research was needed to see if landowners might game the system over longer periods of time.

“I came into this study expecting to be a wet blanket on this idea,” said Dr. Jayachandran, who noted that similar experiments in developmental economics have found that conditional cash grants sometimes have only marginal effects. “We were surprised the impacts were so large.”

While the money offered to landowners was considerable for this developing region — representing 16 percent of median annual income — it was often less than they could have made by harvesting forests for timber. Yet many landowners were not relying on forests as a primary source of income. Instead, they culled trees periodically to sell to charcoal dealers for emergency cash. The payments seemed to deter that practice.

In follow-up surveys, the researchers found that landowners who signed up also started patrolling their forests more frequently, preventing outsiders from cutting their trees for firewood. Yet some deforestation still continued in these villages, suggesting that the payments alone were not enough to stop all habitat loss. 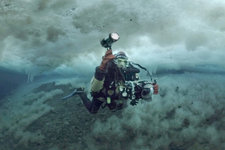 Video Feature | The Antarctica Series Four virtual-reality films take you on, above and below the Antarctic ice.

Outside researchers praised the study’s design, noting that few conservation programs are subject to such rigorous scrutiny. Although randomized trials have become common to test public health policies — to see if distributing bed nets reduces malaria, for example — they are rarely done for environmental programs.

“It’s shocking that foundations aren’t willing to fund more studies like this,” said Paul J. Ferraro, a professor of environmental economics at Johns Hopkins University, who noted that controlled experiments can be expensive to set up. But without them, economists have been unsure whether forest payment programs in places like Costa Rica are having any impact.

Uganda’s government has already set aside large reserves to protect its chimpanzees, who have become a major tourist attraction. But about 70 percent of the nation’s forests remain on private lands, and those forests serve as crucial corridors for chimpanzees to migrate between reserves, said Lilly Ajarova, who directs the Chimpanzee Sanctuary and Wildlife Conservation Trust in Uganda. As trees are cut down, more chimpanzees have been wandering onto farms and stealing crops, leading desperate farmers to kill them.

“Trying to solve this problem through strict laws doesn’t always work,” said Jeff Mosenkis of Innovations for Poverty Action, a nonprofit that helped run the study. “You have to build a program that takes into account the needs of people on the ground, and this study was a nice example of that.”