For Arkansas Community, an Execution Is ‘the One We’re Waiting On’

STAR CITY, Ark. — James Hawkins, the affable local coroner, has long performed a grim duty on execution nights: He pronounces the deaths of the condemned prisoners. He has done it more than two dozen times.

Mr. Hawkins anticipates declaring another man dead on Thursday night, when Arkansas plans to execute its fourth prisoner in seven days. But the coroner knows it will be different on Thursday. Seventeen years after pronouncing the death of a murder victim and a family friend, Cecil Boren, Mr. Hawkins expects to do the same for Mr. Boren’s killer, Kenneth D. Williams.

“It’s a satisfying moment,” Mr. Hawkins said in an interview at a funeral home in this largely rural patch of southeast Arkansas, where prisons and produce are about all that power the local economy. “What I’ve heard nonstop in this community — this entire community — is: ‘This is the one we’re waiting on.’”

The death chamber in nearby Varner is Arkansas’s ultimate clearinghouse for capital cases, the site of all of the state’s executions in the modern era of the American death penalty. The area is one of the country’s sparsely populated death chamber locales, places of peculiar notoriety whose very names can be statewide shorthand for capital punishment and hard time: Angola, La., Parchman, Miss., and Raiford, Fla.

But it is exceptionally rare for any such place to hold an execution for a crime committed in the area. And no case connected to Arkansas’s recent spate of executions, when the state intended to put eight inmates to death over less than two weeks, was more locally resonant than the one that involved Mr. Boren, a former Internal Revenue Service worker who had been an assistant warden at the Cummins Unit, the prison where Mr. Williams is to be put to death. His nickname was Pee-Wee, and Mr. Williams murdered him after escaping from the prison. 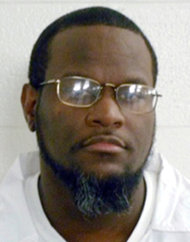 “I personally know part of the Boren family, and, of course, naturally we empathize with them,” said Mayor Charles R. Knight of nearby Grady, where the city limits end just a few miles from prison watchtowers. “But we empathize for all of the families involved, and being Christian, we also empathize with the inmates as well. From my standpoint, I look at it as, this is the law, this is what the law has allotted and this is what we do.” 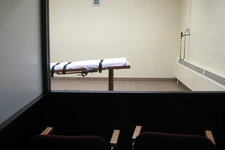 The state built its death chamber in 1978, and Mr. Williams was born the following year. In 1998, he emptied a revolver after a robbery, killing a 19-year-old woman, Dominique Nicole Hurd. When Mr. Williams was spared the death penalty and sentenced to life in prison, he mocked Ms. Hurd’s relatives, turning to them and saying, “You thought I was going to die, didn’t you?”

He was sent to Cummins and, weeks after his arrival, escaped by hiding inside a 500-gallon tank that was brimming with hog slop. Mr. Boren was in his yard, working while his wife was at church, when Mr. Williams arrived. The fugitive entered the house, stole one of Mr. Boren’s guns, shot him seven times, seized his victim’s wallet and drove off in his truck.

In Missouri the next day, Mr. Williams led the police on a high-speed pursuit that ended when he struck a water truck, killing its driver. Sentenced to death for Mr. Boren’s murder, Mr. Williams later wrote a letter to The Pine Bluff Commercial, an Arkansas newspaper, and confessed to another killing that had been unsolved.

“I don’t want to make any excuses or shift the blame,” Mr. Williams wrote in the letter in 2005. “I just want to be honest and accept responsibility for my actions.”

The confession, as well as Mr. Williams’s professed religious transformation, had no discernible effect on the Arkansas Parole Board, which ruled this month that his application for clemency was “without merit.”

The daughter of Michael Greenwood, the man killed during the pursuit in Missouri, urged Gov. Asa Hutchinson to stop the execution. “We are in no way asking you to ignore the pain felt by the victims of Mr. Williams’ other crimes,” Kayla Greenwood wrote in a letter this week. “We know what they are going through, but ours is a pain that we have decided not to try and cure by seeking an execution.”

Mr. Hutchinson, who set the state’s execution schedule, has not offered a reprieve.

At Carla’s Cafe, a lunch spot in Star City, the county seat, that was just fine. On Wednesday afternoon, when grilled pork chop was a lunch special, residents expressed little concern for Mr. Williams, whose lawyers argue he is intellectually disabled.

“When they apprehended him in Missouri, they should have shot him down and killed that sucker,” said Wayne Harmon, 66.

But the police did not, so people like Mr. Harmon were left to worry that some court somewhere would step in to save Mr. Williams’s life days before the expiration of one of Arkansas’s lethal injection drugs.

“We’ve got some of the sorriest judges, leaders and men,” Ed Hardin, 73, said. “I got tickled the other night when the governor said this was the hardest thing he had to do. Hell, if you can’t be no better governor than that, you don’t need to be governor.”

In hotels and in restaurants, in the Governor’s Mansion and on Main Streets, the executions in Arkansas have occupied a startlingly large segment of conversation. Residents have debated execution methods — electrocution is still enshrined in Arkansas law as a future possibility — and analyzed last meals. Some here have committed details of the crimes to memory and recalled executions even before Mr. Hawkins’s tenure as coroner, which began in 1991. Facebook feeds have been filled with posts about — and pleas for — the state’s original plan to put eight men to death this month. (Four of the executions were postponed indefinitely.)

Polling suggests that more than 70 percent of the state’s residents support the death penalty, but, because of drug supply issues, it is not clear when Arkansas will be able to put anyone to death again. In this area, people welcomed the fact that Mr. Williams was poised to die just before the expected onset of an informal moratorium.

Emotions here are rarely so vivid for executions at Cummins, but, Mr. Hawkins noted, “When it hits your home, it’s a little different.”

Vickie Williams, Ms. Hurd’s mother and no relation to Mr. Williams, said her daughter had ambitions of being a neonatologist as a biology and premedical student at the University of Arkansas at Pine Bluff, where she was known as Nicky. Ms. Williams said she did not plan to attend the execution, but she supported it nonetheless.

“He did not receive the death penalty for killing Nicky,” she wrote in an email. “If proper justice was served, others may not have lost their lives. The justice system is very confusing. Everyone has rights except for the families of victims.”

Mr. Williams’s execution is scheduled for 7 p.m. Central time. At midday Thursday, no stays of execution were in effect.

“I think they’re doing the right thing executing him,” said Rodney Kennedy, who said Mr. Williams cut across his parents’ 1,500-acre property after he fled from Cummins. “He could always escape again and kill again.”