Since President Trump took office in January, job growth has continued to be robust, and the unemployment rate has continued to fall. Republicans have become far more confident about the economy since the election.

Democrats, meanwhile, have grown far less confident about the economy. But the job market has improved at least as much for those likelier to be Hillary Clinton supporters as for Trump supporters. In fact, the drop in unemployment and the rise in wages have been stronger for them by some measures. 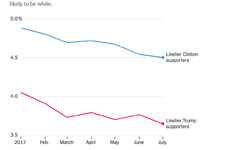 Graphic | Estimated Unemployment Rates The unemployment rate is higher for Clinton supporters, who are younger and less likely to be white.

These estimates are based on data that the Labor Department uses for the monthly jobs reports, combined with a model of voting based on demographics.

Despite less current hardship, likelier Trump supporters might have had more economic anxiety about the future, because they tend to be less educated and likelier to work in so-called routine jobs that are at higher risk from automation. That’s consistent with my previous findings about greater automation risk in redder counties and metro areas.

What has happened since Inauguration Day? The unemployment rate has fallen by equal amounts for both groups: to 3.6 percent in July from 4 percent in January for likelier Trump supporters, and to 4.5 percent from 4.9 percent for likelier Clinton supporters. The prime-age employment-population ratio has risen by 0.4 percentage points for both groups. This measure, unlike the unemployment rate, accounts for whether people have dropped out of the labor force entirely. The prime-age labor force participation rate has also increased similarly for both groups. 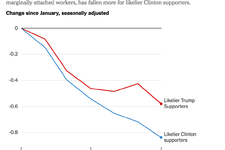 Graphic | Change in a Broad Unemployment Measure U-6, a version of the the unemployment rate that includes underemployed and marginally attached workers, has fallen more for likelier Clinton supporters. 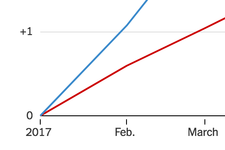 Why are labor market gains tilting in a different direction than economic confidence? The rise in political tribalism in one obvious explanation for partisan differences in confidence in the economy.

But there are other reasons. The improvement in labor market outcomes for likelier Clinton supporters might, in part, be a closing of gaps that widened during the recession, such as racial differences in the unemployment rate. (Blacks, who tended to support Mrs. Clinton, endured more economic hardship during the recession than whites.) Also, economic confidence predicts actual behaviors weakly at best.

Debates continue about how much economics affected the 2016 vote, but an improving job market is both a core aspiration and a bragging point for incumbent politicians regardless of party. If jobs and wages matter in how Americans judge presidents and how they eventually vote, the post-inauguration decline and persistent partisan divide in Trump’s approval rating are all the more striking given the bigger economic lift received by likelier Clinton supporters.

Only seven months into the new administration, it’s far too soon to say whether the Trump years will eventually bring more jobs and higher wages to his base than to his detractors. But so far, the difference in labor market success has, if anything, gone in the opposite direction of the partisan swing in economic confidence.

The Bureau of Labor Statistics calculates the official unemployment rate and other labor-market indicators from the monthly Current Population Survey (C.P.S.) of households. That survey does not ask respondents whom they voted for or which political party they belong to. But it does ask about demographic variables, including age; race and ethnicity; educational attainment; sex; marital status; presence of dependent children in the household; and state of residence. We used those variables — and the Cooperative Congressional Election Study, which includes more than 40,000 respondents who voted for Donald J. Trump or Hillary Clinton — to predict 2016 vote choice. “Likelier Trump supporters” and “likelier Clinton supporters” in the C.P.S. are defined based on their demographic similarity to actual Trump voters and actual Clinton voters in the C.C.E.S. Estimates of labor market indicators for each group are weighted by the probability of each C.P.S. respondent’s being a likelier Trump supporter or a likelier Clinton supporter. More details are available here; this academic paper takes a similar approach to voting prediction.