DECATUR, Ga. — It was Friday afternoon at Kimball House, a casually elegant bistro set in a 19th-century railroad depot where the bartenders wield Herbsaint, rye and peach honey. Chuck Reece, 56, editor in chief of the website The Bitter Southerner, was at the bar, poring over the day’s raw oyster menu and using a little pencil to circle all the items of Southern provenance.

Then Mr. Reece recounted his website’s origin story, one he suffuses with a dash of the providential. It was originally going to be a breezy celebration of Southern cocktail culture, he said, until he and his friends hit on that curious name. “Bitter Southerner” suggested a more ambitious mission. “We basically spent a year trying to figure out what that name was telling us to do,” he said.

And this, in essence, is what they heard: “Cross out the ‘i’ and add an ‘e’,” Mr. Reece said. “Bitter” would become “better.” This website was going to try to fix the South.

From the outside, the American South of 2017 may seem stuck in a one-note loop of grim historical disputation, with fights over the Confederate flag and monuments interrupted only by meteorological disaster. But Mr. Reece’s online magazine is engaged in a broader re-examination of Southern identity that is playing out in a clutch of ambitious regional publications, some of them provocatively named — Garden & Gun, Scalawag — and all describing a multifaceted, multiracial future that seems to have already arrived, right alongside the incessant re-litigating of the past.

In the last four years, The Bitter Southerner has emerged, on a shoestring budget, as a kind of kitchen-sink New Yorker for the region. It has tackled issues of race, class, crime and capital punishment, and published profiles of Southern farmers, bartenders, beekeepers, gay teenagers, spiritualists and civil rights pioneers. Begun as a hobby, the web-only magazine now has 100,000 visitors per month, a small staff and a cult readership that supports its journalism with the purchase of T-shirts that broadcast Mr. Reece’s vision of inclusiveness (“All Y’all”) and the good life (“Drink More Whiskey”).

Along the way, it is trying to manage a tension that has long dogged Southern publications: How much to sing the song of the South, especially amid genuine evidence of racial progress, and how much to be a skeptical voice in a place where issues of race and class often shadow conversations about even the most innocent pleasures?

At one end of this spectrum is the Charleston-based Garden & Gun, a gauzy, 365,000-circulation lifestyle magazine that defines and reflects the new Southern aspirational style: Dowdy suburbanism is out, replaced by a vision of vernacular architecture, artisanal everything, the wabi-sabi chic of the rural hunting lodge and an informed embrace of regional cooking. Kimball House, with its vintage sconces and heart pine floors culled from a Kentucky distillery, has been featured in the magazine at least twice.

After nearly going under during the recession, Garden & Gun’s bimonthly issues are now fat, thanks to the humming economy and the avoidance of a list of topics, once enumerated by the editor in chief, David DiBenedetto, that might offend its readers: “politics, religion and SEC football.” (Don’t hold them to the last one.) Its aversion to controversy has, oddly, made it the South’s most controversial magazine, criticized by some Southern liberals who contend that it trots out a stylish, sanitized version of the moonlight-and-magnolias myth — even though its vision of the new Southern good life makes room for same-sex garden party hosts, contemporary African-American novelists and inventive Mexican-American chefs.

On the other end of the spectrum is Scalawag, a Durham, N.C., based nonprofit quarterly begun in 2015 by a three 20-somethings, with an unapologetic left-wing agenda and dispatches from self-identified queer Appalachia, gentrifying East Nashville and North Carolina’s death row. Its circulation is about 1,500, and it does not review cocktail bars. Its motto: “Reckoning With the South.”

“The South is not this homogeneous place — it has a deep history, a really full history, and one that’s not just for the upper class,” said Alysia Nicole Harris, 29, an African-American who grew up in Virginia and is an editor in chief of Scalawag. “The demographics are changing. And ultimately, we believe that the South is going to be the voice that emerges to lead this conversation about trauma and healing, because here is where the trauma was the thickest.”

Somewhere in the middle is The Oxford American, the venerable literary journal, less overtly polemical than Scalawag, but more apt to tackle the hard questions than Garden & Gun, in part by publishing some of the region’s best black authors. Here one finds the poet Nikky Finney spinning a “radical libretto” of slavery days and beyond; the cultural critic Zandria F. Robinson measuring the distance, in memoir, between Memphis and the Mississippi Delta; the novelist Kiese Laymon describing how the Atlanta hip-hop duo OutKast shaped his art.

The reigning commercial queen of the region continues to be Southern Living, that anodyne, 51-year-old war horse with the best cheese-straw recipes, and an audited circulation of 2.8 million. It has left the grappling-with-the-South lane open, and The Bitter Southerner, Scalawag and The Oxford American have filled it, responding to the deadly racial violence in Charlottesville, Va., with a mix of probing essays on history and politics, and first-person reporting from the streets. The Bitter Southerner also weighed in with a not-so-bitter take on the flooding in Houston. 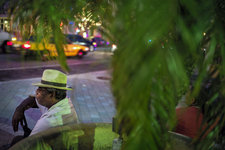 The most compelling contribution of the Atlanta-based Bitter Southerner may be the voice of Mr. Reece, the kind of 21st-century Southerner not always heard beyond the confines of the place. His is a white voice, simultaneously proud and conscience-stricken, screaming to be heard over the stock-car roar but always cognizant that there are other voices, in other flavors, that may deserve a hearing even more.

“If you are a person who buys the states’ rights argument … or you fly the rebel flag in your front yard … or you still think women look really nice in hoop skirts, we politely suggest you find other amusements on the web. The Bitter Southerner is not for you,” Mr. Reece wrote when the site began publishing in August 2013. “The Bitter Southerner is for the rest of us. It is about the South that the rest of us know: the one we live in today and the one we hope to create in the future.”

He knows his own publication has a way to go. The founders, a half-decade ago, were all white. Mr. Reece recently recruited a black managing editor, Timothy Turner, and a black music columnist, Joycelyn Wilson, a media studies professor at Georgia Tech. One of her most recent pieces, riffing on the latest 2 Chainz album, was titled “Four Reasons Pretty Girls Like Trap Music.”

When I returned to the South three years ago to work as a correspondent for The New York Times, The Bitter Southerner was gaining some buzz, but I was leery. Mr. Reece has written that his site exists “to support anyone who yearns to claim their Southern identity proudly and without shame,” and I suppose I think of my Southern identity as something less to claim than to puzzle out. The summer 2017 issue of The Oxford American features an essay by Harrison Scott Key, in which he describes his experience of playing in a Southern R&B band as a kid. I played in one, too. Apparently we shared the same small epiphany:

“We played for friends here and there, and we sounded O.K. — but something was missing,” Mr. Key wrote. “On the outside, we were white, but on the inside, we were also white. And inside that inner whiteness, there existed a deeper shade of white that knew things, such as how our good fortunes had come pretty easy, at least compared to the people we sang about in the songs we played.”

But I like Mr. Reece’s magazine, which, like any great periodical, feels like it is of its moment. At Kimball House, Mr. Reece held forth on a range of Southern topics both frivolous and deep: The introduction of okra as a cheap New World food supply for enslaved Africans. (“You can’t write a story about how wonderful a thing gumbo is without acknowledging that it is an undeserved gift.”) The mixology skills of New Orleans bartenders. (“There are old bars where folks never stopped doing it right.”) His interview with the Atlanta rapper Killer Mike (“He said, ‘I’m not that different from people you call redneck. I drive a truck. I like to fish.’”) And Southern millennials, born into a world where correctives to the Lost Cause myth are only a couple of clicks away.

They are an important part, he said, of The Bitter Southerner’s target audience.

“We have ancestors, recent ancestors, who grew up a certain way, and never challenged that way of thinking,” he said. “Now we’ve got all of these kids who have all of the world’s information at their fingertips. And they have the courage” — Mr. Reece used a more earthy phrase here — “to challenge it.”

Mr. Reece grew up in tiny Ellijay, Ga., in the Appalachian foothills, raising hogs with the Future Farmers of America and working in a record store for credit that he spent on punk rock records.

In 1979, he attended the University of Georgia, in Athens, where new cultural currents were percolating in a Southern context. He took in both the early music of R.E.M. and the art of Howard Finster, the rural Georgia preacher whose self-taught painting was full of otherworldly vision. Backwoods preaching was the kind of thing Mr. Reece thought he had moved to Athens to escape. Now he discovered the wonder in what he had shunned.

These days, The Bitter Southerner is his only full time job — a labor of love, he says, but one that pays a small fraction of his old work in corporate communications. In the early 1990s, Mr. Reece served as press secretary for Gov. Zell Miller, the Georgia Democrat best remembered for railing against his own party at the 2004 Republican convention.

The publication’s challenge is to reflect a modern South that has one foot in the craft cocktail lounge and one in the racial violence of Charlottesville, a reflection of what Patterson Hood, the leader of the Southern alternative rock band Drive-By Truckers, calls “the duality of the Southern thing.”

At a recent meeting, the magazine’s staff, including the media director, Kyle Tibbs Jones, mentioned two recent articles that had been popular among readers: a feature on Decoration Day, a Southern grave-tending ritual with echoes of Mexico’s Day of the Dead; and one that unearthed a trove of old photos of South Louisiana residents posing next to their beloved azalea bushes.

They spoke of the articles to come. Mr. Reece said they might run something on the novelist Thomas Dixon Jr., whose writings inspired the racist 1915 silent film “The Birth of a Nation,” and celebrated the white backlash that brought an end to Reconstruction.

“Basically a lot of what you see becoming manifest in alt-right philosophy today has antecedents in Dixon’s writing,” Mr. Reece said.

“Dark week,” Ms. Tibbs Jones said. “We need to follow that up with some azaleas.”