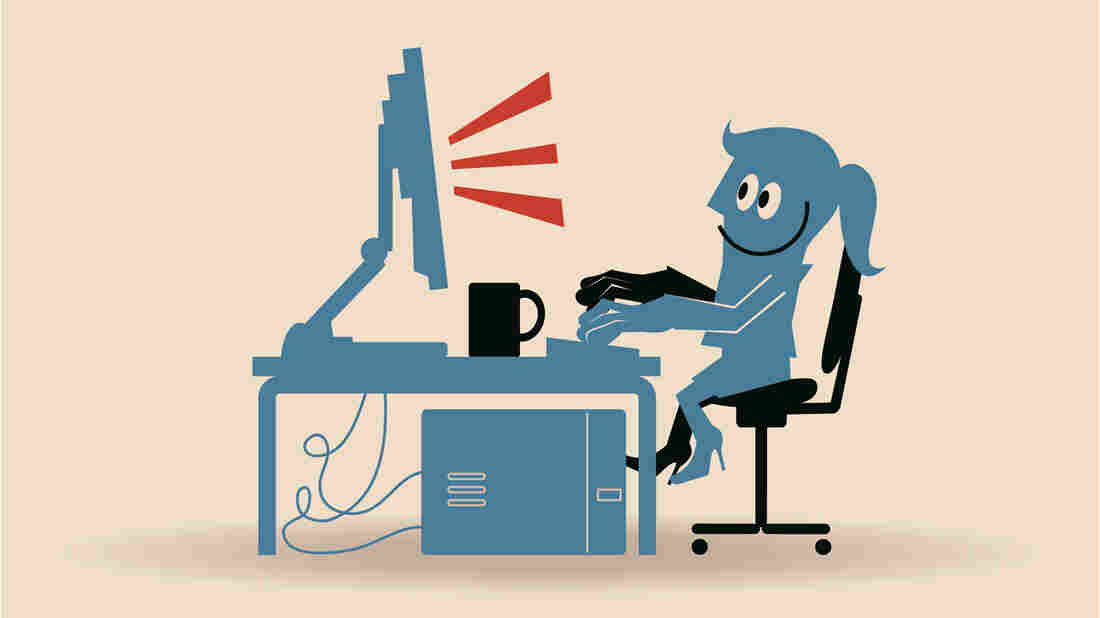 Wi-Fi names could give a political statement to a far broader audience than sweater pins, bumper stickers or even tweets. alashi/iStock hide caption

When they’re on signs or buttons or in tweets, political statements are easy to see. But then there are those that are hidden from view, until you log into the right place. For example, when you look for new Wi-Fi networks to get online.

President Trump’s supporters and opponents have expanded their battlefield even to the choice of their own Wi-Fi names — identifying their networks according to what they think of the president. Examples range from the F-word followed by Trump’s name to the acronym “MAGA Wi-Fi,” which stands for “Make America Great Again Wi-Fi.”

Although some may dismiss the practice as irrelevant, Wi-Fi names could give a political statement to a far broader audience than sweater pins, bumper stickers or even tweets. After all, the average lifespan of a tweet can be just a few minutes. And these days politics is the kind of divisive topic that could easy ruin a family dinner, so many people decide to discuss it only with others who think the same.

On the other hand, we constantly bump into perfect strangers’ Wi-Fi spheres, either through their smartphones or routers. As any frequent flyer knows, turning on the Wi-Fi search and browsing the names of available networks in a crowded waiting room may be a humorous diversion.

My neighbors so racist he named his WiFi “trump for life”😂😂

Also, it’s not strange at all asking for the local Wi-Fi name and password when a friend invites us to come over. Answers may reveal something surprising, funny, or even shocking about our host. According to data from market research firm Strategy Analytics, 61 percent of U.S. households have Wi-Fi networks installed. Some owners like to choose witty (or wannabe witty) names for their network, such as “Martin Router King” or “FBI Surveillance Van.”

Reddit has countless posts about this phenomenon. Wi-Fi names may refer to movies, music and pop culture, such as “Routers of Rohan” (Lord of the Rings), “Connecto Patronum” (Harry Potter) or “Wi-Fi is in the air” (the song “Love Is in the Air”). In other cases, people name their Wi-Fi to send messages to family members (“Mom, use this one”), landlords (“Kyle, fix our dishwasher”) or neighbors (“Get your own damn Wi-Fi”).

my dad named our wifi MAGA(make america great again) cause he knows how much i HATE trump…. dick move dad!!! pic.twitter.com/c7kVmzXp9f

While some people get extremely creative while choosing their Wi-Fi name, others don’t miss the chance to send a clear political message. One recent example is “Black Wi-Fi Matters,” spotted on Reddit after the rise of the Black Lives Matter movement.

In 2012, London-based wireless coverage mapping company OpenSignal built a database of almost 75 million routers worldwide and searched for the occurrence of the word “Obama” in their names. The result was a map of the political sentiment about the President Barack Obama, who at that time was campaigning for a second term. From “Vote Obama in ’12” near Los Angeles to “Obama Care Doesn’t Care” in Queens, New York, the Wi-Fi names were pretty revealing of their owners’ political views.

In the case of Trump-inspired names, it all started far before Election Day. Last August, a Wi-Fi network named “Clinton Email Server” popped out at a Trump rally in Austin, Texas. Ironically, the network didn’t require any password. Clearly, it called to mind Hillary Clinton’s controversial use of an unsecured server. A list of “Wi-Fi ideas for Trump supporters” appeared on Twitter shortly after.

On Election Night, the Wi-Fi provided for members of the press at Trump’s event at the New York Hilton Midtown also took a clear stand about the expected outcome. The name of the network was “Trump2016” and the password “DJT4thewin.”

After Trump had become president-elect, a hotspot name was changed to “Trump Won! HipHipHooray,” according to this tweet.

My roommates changed the wifi network to “TRUMP!”

Thanks for justifying my hate for you ✌ 🖕

In Colorado, a group of roommates renamed their network simply “Trump!” At least one of them was not happy with the change, and tweeted her disappointment.

Have you spotted a funny, a controversial or a political Wi-Fi name in your neighborhood? Tweet us!